This past spring, in a recent quest to explore all things Black and feminist in London, I ended up at the Vaudeville Theatre on West End for a showing of Emilia, drawn by the promise of an all-female production directed by and starring women of color.

Historically, Emilia Bassano was the first published female poet of England, and her writing has established her as one of the original feminist voices in literature. While there likely isn’t a public school–educated person alive who hasn’t heard the name Shakespeare, the literary contributions of Bassano have largely been overlooked. Emilia explores the popular assertion that Bassano was the Dark Lady of Shakespeare’s sonnets, as well as how and why that fact may have been lost to history.

Directed by Nicole Charles, Emilia imagines Bassano as a woman of African descent, based (in my humble opinion) quite fairly on the descriptions of Shakespeare’s Dark Lady as being distinctly not pale white; having a “dun” complexion and “black wires” for hair. The story follows her fight to achieve publication and avoid falling into obscurity as her lover Shakespeare grows increasingly popular with more than a little help from Emilia herself. Along the way, she faces a myriad of challenges that, while particularly dangerous in the seventeenth century, definitely resonate with women today: challenges of finding respect in the pursuit of love and romance, attempting to break through the various glass ceilings as a professional in one’s field, and juggling motherhood with personal ambition. 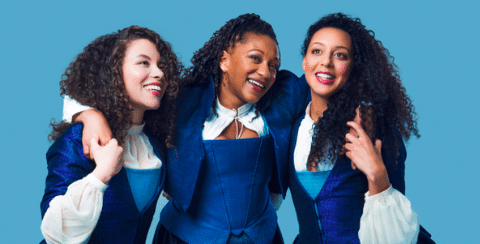 Shining stars were definitely Saffron Coomber (Emilia The Youngest) and Clare Perkins (Emilia The Eldest). Coomber showed such a depth of character as she shifted effortlessly from being the best source of comedy to the emotional root and anchor of the play’s most heart-wrenching moments. Perkins, the ever-present narrator, provided a strong and grounded connection to the audience. As both the opening and closing voice of the show, her lines and delivery had such staying power that I found them still resonating in my head hours later. Worth mentioning also is the excellent comedic contributions of Amanda Wilkin as Alphonso Lanier.

While not a musical, the play made great use of lyrical elements and choreography to punctuate the time changes and tonal shifts between scenes. The set pieces didn’t vary much throughout the show, but they were used expertly. The experience was, at times, even interactive in its use of space and movement, as audience members were handed various items and the actresses utilized the seated areas as part of the greater stage.

Emilia was a consistent barrage of one pleasant surprise after another, from the true encapsulation of diversity in its casting, including women of all shapes, sizes, and abilities to the tenacity with which it tackled the various intersections of oppression between race and gender. One of my concerns going into the show was that it would be a notably white feminist production, avoiding anything too racially charged so as not to offend a largely white audience. But the script was completely unafraid to take on some of the large, inflammatory issues of today, such as immigration, racial fetishizing, and the use of privilege (intentional or otherwise) against those without it. It absolutely does not let white women off the hook when they play into these social systems. Yet it still managed to achieve an excellent amount of levity and light-heartedness at just the right moments. I felt equal parts educated and entertained.

The show also served as an excellent example of how increased diversity in all respects can enhance a work of art, as opposed to simply making something work. For example, one of the key actresses, Sophie Leigh Stone, is deaf and made brief use of sign language, which added an excellent comedic element to one of her scenes. Having come from a college with a large deaf and hard-of-hearing population, I was thoroughly excited by the first public display of sign language I’d seen since undergrad.

In summation, Emilia was precisely the Black feminist experience I was looking for in London. And even as someone who is by no means a Shakespeare aficionado, the show held every bit of my interest from start to finish. To quote one of the notes I took immediately upon exiting the theater:

While Emilia is no longer playing at the Vaudeville Theatre, you can purchase a copy of the playtext at https://www.oberonbooks.com/emilia. Also, as of now, Morgan Lloyd Malcolm’s play is available for performance by educational institutions. The playtext makes very strong note of the fact that Emilia “was written to be performed by an all-female cast of diverse women,” urging those who wish to adapt it not to ignore this fact.

To apply for performing rights, visit NFH Plays To Perform.

Casira is a writer, traveler, and Black feminist explorer currently working in the non-profit sector. When she’s not country-hopping, she’s planning her next getaway and trying to learn a new language. Follow her on IG @cejayce for pop color photos from her latest trips. For questions regarding book reviews, email casiracopes@gmail.com