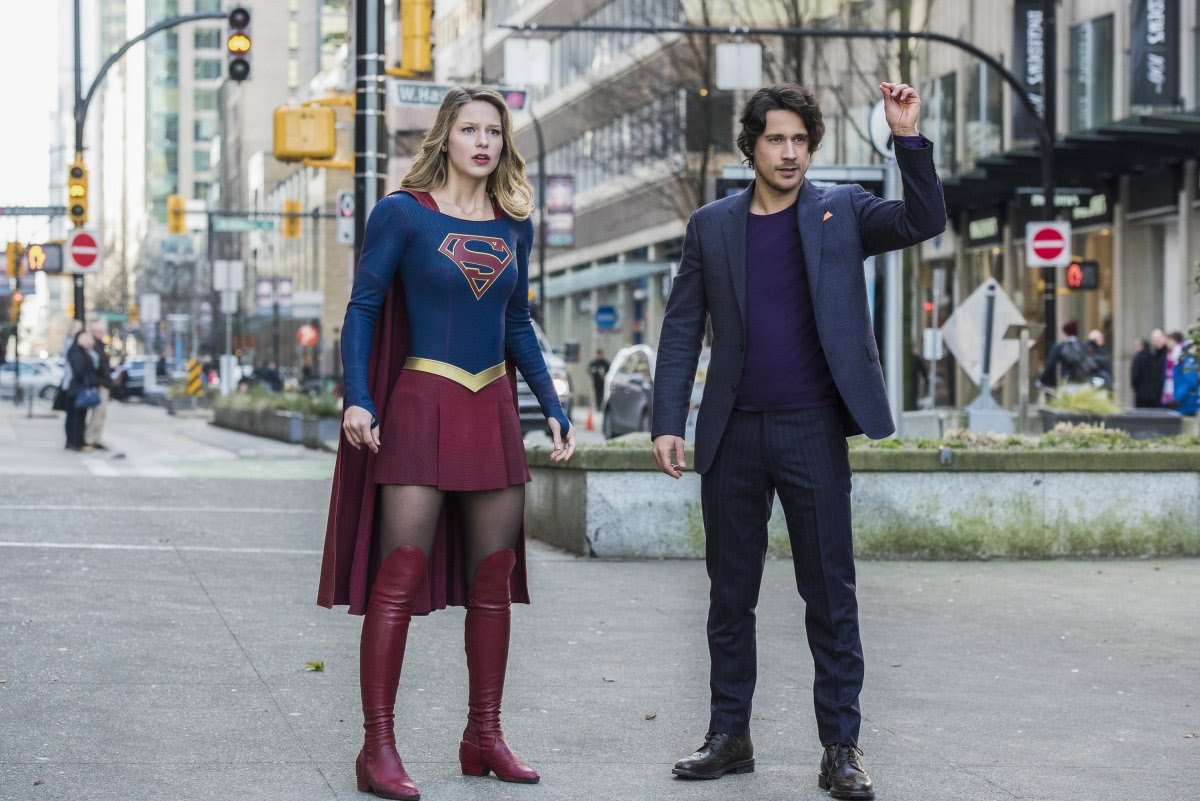 This week’s episode is a Valentine’s Day Episode! It dives deep into unhealthy relationship constructs, the importance in communication and honesty (you know, unlike #hurtbae).

Kara’s got a Stalker

We start this week where we left off last, with Mr. Mxyzptlk professing his love for Kara and asking her to marry him. Kara is confused because she doesn’t know him from Adam, and Mon-El is put out (both figuratively and literally — Mr. Mxyzptlk sends him to the DEO in his undies) because he’s being cockblocked. Kara obviously says no to his proposal, but Mr. Mxyzptlk vows to get her to fall in love with him eventually.

Kara checks in at the DEO and finds out that Mr. Mxyzptlk is a 5th dimensional being capable of warping time, space and reality. His kind is also frequent on multiple worlds including Daxxom and Mars. J’onn tells Winn to research any past human run-ins with these beings.

The next day there is a bank robbery in National City and Supergirl is there to stop it. She is about to catch the robbers when Mr. Mxyzptlk appears and tries to help her by drawing the thieves’ guns on them instead, almost killing them. Supergirl saves the bank robbers but is unable to catch Mr. Mxyzptlk.

That night Parasite (who should be dead; see episode 6) starts attacking National City. Supergirl and Mon-El show up to save everyone, and so does Superman!? It’s actually Mr. Mxyzptlk dressed as Supes so that he can save the day and impress Kara. He vows to continue to terrorize the city until Kara agrees to marry him. Frustrated, Mon-El is ready to kill Mr. Mxyzptlk and reveals that if you get him to say his name backward he’ll go away forever. Kara is annoyed by Mon-El’s chauvinistic hot-headedness and tells him to leave, letting him know she’s got this. Kara gets back to the DEO and her and Mon-El get into a huge fight because he refuses to listen to her, and Kara doesn’t really respect him.

Mon-El runs into Winn, who’s busy thinking and like a fool lets slip to Mon-El that all the assorted instruments behind him are for tracking and stopping 5th dimensional imps. Winn then leaves the room, allowing Mon-El to take whatever’s at his disposal. Meanwhile, Kara is trying to learn how to say Mxyzptlk backwards.

Mon-El meets Mr. Mxyzptlk in a dark ally and has taken it upon himself to duel with him to the death for Kara’s hand. The two, dressed in garb from the late 1700s (HAMILTON !!) start fighting long enough for Kara to show up. Mr. Mxyzptlk continues his spiel about how he will do anything to get Kara to marry him, and much to Mon-El’s dismay, she agrees.

Mon-El goes to Kara’s apartment to talk her out of marrying Mr. Mxyzptlk and she shuts him down and promptly breaks up with him. Kara meets Mr. Mxyztptlk at the Fortress of Solitude (to be married on the soil of her people) and turns him down, again. Mr. Mxyzptlk is pissed and brings a giant ice statue of Jor-El to life to fight her. Kara wins, but Mr. Mxyzptlk threatens to continue causing destruction until he gets what he wants. Kara is tired of playing nice and sets the atomic cauldron to self-destruct which will kill them both, because Kara would rather be dead than with Mr. M (sick burn bro). Mr. Mxyzptlk freaks out because though he can bend reality he can’t make Kara NOT kill herself and begs her for the passcode to stop it. She tells him and gets him to spell (which in many ways is the same as saying) his name backwards, forcing him to disappear forever.

Mon-El returns to Kara’s apartment and apologizes for being a patronizing asshat. He admits that his feeling for Kara are strong and he doesn’t know what to do with them. She admits to tricking him into thinking she doesn’t have feelings for him, as part of her plan and they kiss or whatever.

While brunching with Maggie, Alex gets a Valentine’s Day card from her mom which is dorky and cute. Maggie proceeds to go on tirade about how much she hates Valentine’s Day (I mean same girl, but chill) clearly making Alex uncomfortable.

Later at Kara’s apartment, Alex tells Kara about Maggie’s dislike for Valentine’s Day and how she’s disappointed because after years of being single AF she was hoping to have at least one Valentine’s Day where she can be cheesy and gross like everyone else.  Kara encourages Alex to make a Valentine’s Day that fits Maggie’s tastes and likes in hopes that maybe she’ll come around to it.

Maggie enters her apartment to find it Malentined (Maggie + Valentine) up with all her favorite things (including scotch, tiramisu, and a sexy Alex) and she’s pissed. She yells at Alex for not listening to her and respecting her feelings about Valentine’s Day.  She then tells Alex the true story of how she was outed to her parents on Valentine’s Day by a friend she had feelings for. Maggie’s parents weren’t understanding and they kicked her out, which is why Valentine’s Day is so triggering for her.

After realizing that she was low-key being a jerk, Maggie runs into Kara at the DEO and Kara tells Maggie, to give Alex a break. Kara recognizes Maggie’s distain for Valentine’s Day, but she points out that relationships are a system of give and take, and maybe she can look past whatever she’s got going on to be emotionally supportive of Alex.

Maggie leaves a present and a note for Alex and it turns out she has thrown her a Valentine’s Day prom as a means of apologizing for her actions and showing how much she cares about Alex.

Winn is day drinking when he gets accosted by two angry aliens at the Alien Bar (aka the bar with no name). He is saved by Lyra an alien who “doesn’t like bullies.” She and Winn get to talking and he learns she’s from Starhaven a once utopian paradise. After they spend some time bonding she asks Winn out on a date as repayment for saving his life.

Winn is a little iffy on dating Lyra, and after some non-advice from Mon-El, Winn decides to go for it. He’s late meeting Lyra because he was securing dinner plans at an upscale restaurant, but she doesn’t care, all she wants to do is bone.

Despite their first date being more like a sex appointment, Winn and Lyra go on a second date. Lyra is wary of Winn because she doesn’t believe that human actually want to date her for her, but for the experience, and Winn is wary because the last girl he dated turned evil. They both agree to work it out in the end.

This was probably one of the most amusing episode this season (not counting the crossover). BUT Kara’s relationship with Mon-El can’t be made to last because their fight demonstrated how unstable this relationship is going to be. The issues they have with each other are major and not something you can really compromise over and they haven’t even determined the status of their relationship yet. Maggie’s coming out story was a little cliché, but I suppose there’s a truth aligned with the cliché -ness of things.