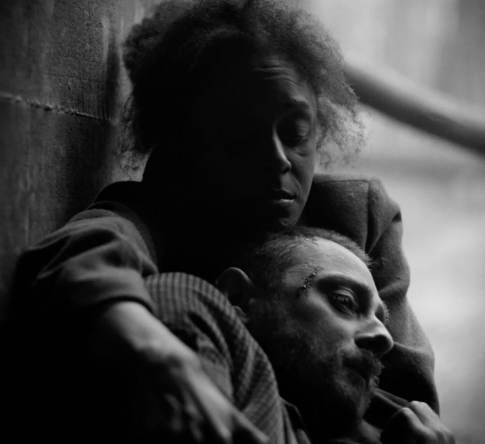 Fugitive Dreams is an artistic work of cinematography. Highlighting special themes of mental disorder, homelessness, isolation, forgiveness, and redemption, this film captures the essence of two individuals trying to find a reason to continue forward. Directed by Jason Neulander and co-written by him and Caridad Svich, their work creeps ever closer to a hopeful ending for both their tragic main characters.

Making its world debut in Fantasia 2020, Fugitive Dreams has something mesmerizing about it. Between its small cast, the retelling of the histories of John (Robbie Tann) and Mary (April Matthis), and individual story lines that merge at different points, this production turns the straightforward narrative into a multi-layered one.

Each character brings something, whether broken or not, that helps to evoke a memory or a feeling within the two principal characters. With every crime and every act of kindness, another layer is peeled back from John’s and Mary’s younger and more vulnerable years. This film is not the stereotypical criminals running away from the law that is over-played, but it is instead a fascinating retelling of two lost souls trying to find healing in an unforgiving world that has all but discarded them.

Fugitive Dreams is a topical tale of those who abuse their positions and power and those who must learn to find peace and forgiveness. This abuse of power is woven into the narrative for both John and Mary in two very distinct ways. Harm and trauma haunts both of these unfortunate souls. While they search for an escape, they are blithely unaware of the beauty that stands before them. Each one finds a way to help the other understand the world through a different viewpoint, allowing them to gain insight and face their demons.

An enchanting feature of the film is its switch from viewing it in black and white to color. The scenes in which color is emphasized are meant to draw your attention to the uncertainty of the events that took place. These scenes almost seem dreamlike and impossible to have actually happened. The final scene with its bright hues helps to enhance the powerful message, in which both John and Mary finally get to understand what they have both been searching for. The two principal characters begin as night and day to one another. Each one goes through a personal journey of self-discovery and realization. Faith and hope are at the core of their respective journeys, while they never forget about each other. Their differences are what in the end brings them ever closer to seeing eye to eye.

Tann plays John with a childlike innocence about him, and it feels at times very believable. At some points, John is kind and almost simple, and at other moments, he has an inner darkness that finds a way to escape. Becoming almost instantly dependent on Mary after their first encounter, he and Mary seem inseparable. Prior to Mary, what managed to keep John going is his admiration for the beauty that is Hollywood. To John, Hollywood cinema represents an escape into the lovely and forgotten times of endless possibilities. John’s own personal journey leads him off the path of righteousness and into a malicious one. His good-natured innocence is easily taken advantage of as he allows himself to submit to the evil that hides in the forest.

Matthis plays Mary as a hardened woman who has been calloused by her interactions. Her life has been weighted down with the anger and hatred she carries from those who have wronged her. On her body are the physical scars of those who have committed crimes against her. This has led her to live a life of solitude and loneness. Seeing little hope for life, she plans on making the ultimate escape from life — she plans on slitting her wrists. Mary’s plans are thwarted by John, who awkwardly makes his appearance into the women’s bathroom. John’s innocence in the film proves to be a foil for Mary’s experience. Through their encounter, Mary’s plans change, and her personal journey leads her to a path of enlightenment and grace. Two broken people can help each other feel less alone in a harsh world. While both of these characters share a traumatizing history of being abused by those who were supposed to protect them, they nonetheless connect by their desire to find something more in life.

Religion plays a powerful role in this film. Outside of the obviously religious names, John with his strong devotions and Mary with her checkered past and redemption arc, the film incorporates religious elements that help draw out the world more. With lessons like you shall not steal and you shall not murder slowly being subverted in the film for John and the arc of redemption, forgiveness, and compassion being applied to Mary, the film’s director manages to find ways of challenging these characters.

While Fugitive Dreams is an interesting film, it is not without its shortcomings. There are moments in the film where people are presented as disposable, and supernatural visions seem to occur without any real explanation. While these might prove to be interesting plot points, it does not do much for the content of the material. Both Providence (O-Lan Jones) and Israfel (Scott Shepherd) play their roles well, but their entry into the film and their exits left more questions than answers. They seemed to only be catalysts for pain and suffering.

Fugitive Dreams is an artsy multilayer film with an unforgettable message that the world can be a harsh and challenging place. The moral of the film is that redemption and letting go of all that haunts you on the path to healing. For anyone looking for a creative film from the perspective of characters who have almost nothing but each other, this is a film you might want to check out.

Getting to Know the Brilliant April Matthis: Mary in ‘Fugitive Dreams’