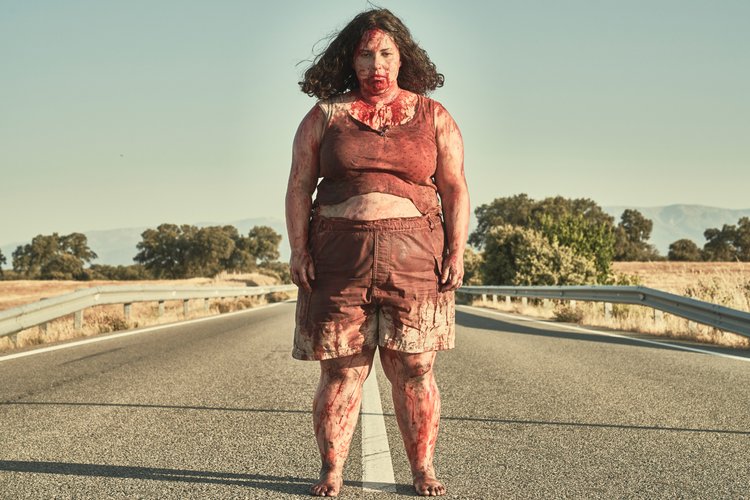 Spanish writer-director Carlota Pereda’s feature film debut is an extension of her 2018 award-winning short film of the same name. With all its bloodiness, Piggy is a female-centric coming-of-age story much like Raw, Ginger Snaps, and The Witch. This introspective morality thriller explores bullying, body image, and basic humanity. It also has fun Friday-movie-night vibes — a classic teen slasher with more to offer.

On an unforgiving hot summer day, Sara (Laura Galán) goes to the pool in her rural Spanish village early enough that she’d ideally have the place to herself. Her excess weight makes the teenager feel self-conscious about her body, something just about everyone can relate to, adolescents and adults alike. Sara’s serene solo dip ends when three girls her age start calling her names — “Piggy” being the main one.

The unsettling presence of a silent stranger (Richard Holmes) is preferred over the gleefully assaulting mean girls. The cruel ringleader Maca (Claudia Salas) nearly drowns the poor girl just for laughs. There’s some history between Sara and one-third of the clique Claudia (Irene Ferreiro), communicated through their lingering stares and Claudia’s almost apologetic eyes. It’s implied that they were once friends but one made her way into the popular crowd, leaving the other behind. Sara’s expected to work at the family-owned butcher shop, which only gives her bullies more fuel for the fire.

Sara survives the brutal encounter but endures even more torment on her way home when she’s chased and teased by some local boys. Humiliated and defeated, she continues the long walk home in a scant bikini, exposed to the blazing sun. When she stumbles upon the stranger abducting Maca, Claudia, and Roci (Camille Aguilar), she’s faced with a moral dilemma — try to save them or let the killer go about his business taking the lives of her tormentors.

Sara’s home life is hardly a refuge from the relentless abuse of others, with constant criticisms and lack of empathy from her mother (Carmen Machi). Adults can be bullies, too, which is almost more hurtful because they’re supposed to protect you. Sara also faces the confusing reality that the person kindest to her is someone who kills people.

Pereda tells Eye For Film, “I’m always more scared of people than I am of monsters, so I wanted to make a movie that reflected that.” The strange man should be the monstrous horror antagonist, and he is to some degree. But seeing a girl ruthlessly bullied verbally, physically, and psychologically is more anxiety-inducing than being stalked by an actual serial killer.

Pereda’s artistic visual storytelling and Laura Galán’s raw vulnerability show how overwhelming alienation and constant ridicule can render someone silent. Sara actually doesn’t say too much — in the short film, she doesn’t say anything at all. Being in Sara’s vantage point, you can’t help but be protective and supportive of her through this wild journey.

Extremadura is a lovely town, but the setting is one you can taste and smell, especially scenes in the butcher shop, reminding me of the icky feeling I get when I watch something like The Devil’s Rejects where the characters are consistently sweaty and bloody. The thick humidity and burning sun in Extremadura might even draw out more aggression from everyone just stemming from how uncomfortable they are in the oppressive heat.

As a young woman who struggles with her body image, Sara finds that the intensity of the summertime heat makes her all the more aware of her size. Pereda says that it’s “one of the reasons why it’s in summer because in summer you don’t escape your body.” Having a swim to cool off would be ideal but that is immediately taken away from Sara. There’s a specific feeling when a bully arrives, on screen or in real life, when your heart drops and your throat tightens and you know that any ounce of joy you just experienced is over.

Like all good horror movies, Piggy will have you questioning what you would do in this extreme situation. You’ll have an immediate gut response, much like Sara, but as the story goes on, you might start to change your mind. There’s a lot more nuance to it than just revenge versus doing the right thing, something not many genre films show, especially involving the youthful rage of teenagers.

Piggy is a brutal, blood-soaked slasher that effectively captures the horrors of being a teenager. The film is a visceral blend of Carrie and Texas Chainsaw Massacre that’s sure to affect anyone who’s been bullied or debased in some way. What Piggy isn’t is a straight-up revenge thriller. Carlota Pereda’s feature-length debut presents something much more morally ambiguous.

Piggy had its world premiere at the 2022 Sundance Film Festival. The film screened at Fantastic Fest before playing exclusively in Alamo Drafthouse Theaters on October 7. Piggy hits theaters and VOD on October 14.