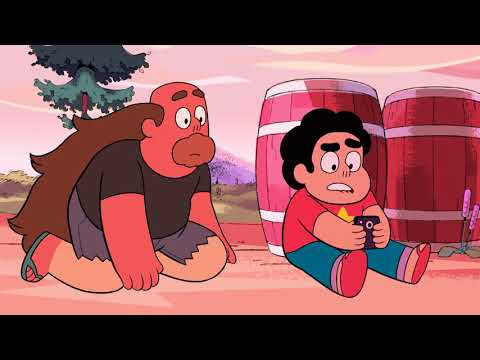 Have I mentioned lately how much I love Greg Universe, the most underrated dad in TV history? Here’s your reminder for the day: Greg Universe is everything. Got it? Good. Now that that’s out of the way, let’s talk about “Gemcation.”

The episode starts off with Steven still not hearing back from Connie regarding the previous episode’s events. He’s sending her increasingly desperate texts until he hears his dad start hollering—he’s been caught in some hoses and needs Steven’s help getting out of it. Steven rips the hoses off of him and asks nervously “Are you good? Are you safe? Do you still love me?” An interesting Freudian slip, one that alarms Greg. Steven’s phone gets a text and Steven gets super excited, but it turns out to be just Ronaldo asking about the Princess Koala box set he lent him (an ongoing gag throughout the episode which is surprisingly hilarious). Watching Steven react to this, Greg asks him if he’s okay. Steven says he’s just suffering from “space lag” and walks away.

While Steven is washing dishes (and gets excited by another text, which just turns out to be Ronaldo inquiring about those DVDS) Greg, Pearl, Garnet, and Amethyst surprise him with a spontaneous vacation, which is obviously meant to take his mind off of things. The gems even take his bed along with them, just so he can be “as comfortable as possible,” as Greg excitedly tells him. They all try to get him to relax and open up to them about his time in space, in their own awkward way, which doesn’t work; Steven is too preoccupied with texting Connie to notice.

Then he overhears them talking about him privately—Greg thinks something terrible might have happened to him in space and the trauma is why he’s been so withdrawn and distracted. Greg is convinced that something is truly wrong and begs the gems to help him find out what it might be. That makes Steven feel even worse, but he still can’t bring himself to vocalize what’s really bothering him, until (after being awkwardly approached by Pearl) he finally breaks down and cries out “Connie hates me!” After spitting out what happened between them, he runs off sobbing while they all stare at him in shock.

And this is where my guy Greg shines. As the rest of the gems stand there frozen, he springs into action, saying “I don’t know anything about Homeworld, but I know about this!” We don’t get many moments on this show where Greg gets to save the day, and it was great seeing him step in knowing that this was a situation he knew how to take care of. He calms Steven down and gently reminds him that that Homeworld adventure was a terrifying stressful time for everyone and Connie were going to deal with it in her own way and he had to respect that, no matter how long it took.

And at the end of the day, he wouldn’t be suffering alone, which Steven is reminded of as he lies on top of the van watching the night sky with Greg, Garnet, Amethyst, and Pearl. We don’t get a lot of moments with just the original squad anymore, but this was a nice one, a reminder that Steven’s greatest strengths come from these people who raised him.

Pearl: “So…Homeworld. I always hoped you’d see it someday. But I thought I’d be there with you. Being taken there. As a prisoner.”

Rating: 4 out of 5 stars. A surprisingly poignant episode that manages to be light and funny at just the right times. (Seriously that Ronaldo gag had me in hysterics.)