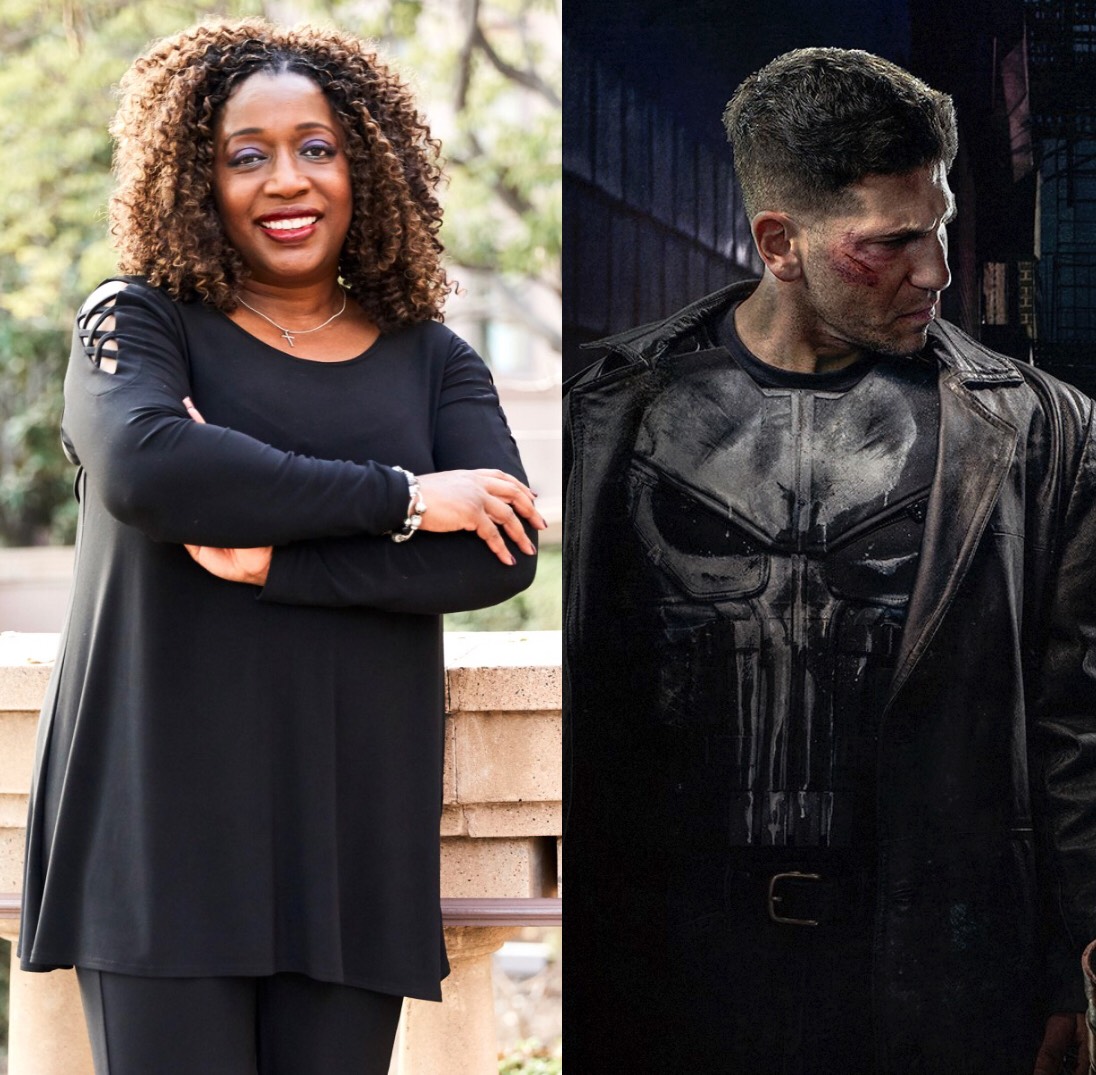 Along with The Quad, Felicia D. Henderson is also busy with Marvel’s The Punisher. We left off Season 1 of The Punisher with Frank Castle brutally destroying Billy Russo’s face with a glass mirror. In the comic, Billy is nicknamed Jigsaw due to his disfigured features which have made many fans of the comic excited. Dinah, thankfully survives the gunshot wound to the head and Karen left the danger of being in Frank’s life.

In the second half of my interview, I talked with Felicia D. Henderson about what to expect in Season 2 of The Punisher and what she does to relax.

Part 1 can be found here.

Tayci: The Quad and The Punisher are very different shows. Why did you choose to work on these two shows?

Felicia: Oh gosh, I know, that is quite a transition right? The Quad is a drama on BET about life on an HBCU campus! And then The Punisher, about a man who takes weapons and kills everyone who he thinks had anything to do with the murder of his family! And it’s one of the reasons I have worked on these shows is that they are so different and feed different parts of my creative self and my creative needs.

With The Quad, I’m very happy and excited to be depicting people who look like me in a world that we don’t see anywhere else on television, so I’m very proud of that. I’ve been a comic book geek since I was seven or eight. I didn’t read The Punisher before I was on this show, so it was like a new world to me in some ways. It was so much fun, just reading book after book, going to my favorite comic book store here in Pasadena, and talking for hours and hours with the people who work there.

Season one of The Punisher has hinted at Frank Castle’s PTSD and how he’s not really dealing with it. He did avenge his family, but that doesn’t mean that he’s healed. So will Frank continue to struggle with his PTSD in season two?

Felicia: In the first season, Frank is dealing with the post-traumatic experience of seeing his family killed right in front of his eyes. And in some ways, that’s something that you never get over. Even if you’ve “avenged” your family, they’re still dead and you’re still influenced by that. It’s one of the areas of research that the entire writing staff has done is on PTSD, in terms of just reading and talking to experts.

Speaking of revenge, one thread that ties all superheroes together is that they create their own enemies. We see this when Frank brutalizes but does not kill Billy, leaving him ample reasons to enact revenge. So how is this going to affect Frank?

Felicia: Billy’s thinking you’ve done this horrible thing to me, now how’s that gonna play out? Obviously, I can’t tell you how it’s gonna play out but you can’t just drag someone’s face across a series of broken mirrors and think they’re gonna be like “Okay, no problem. I’m cool with that.” So season two, you can expect there to be consequences of that day at the carousel.

There are tons of fan theories out there about what to expect next season. Because you guys really keep things under wraps. So one of them is that since Frank appeared in Daredevil, people are hoping that Matt Murdock may appear on season 2 of The Punisher. So can you confirm that?

Felicia: You know, that would be very cool is what I would say to that. It’s interesting because even though Frank was in Daredevil in some really important ways The Punisher and therefore Frank Castle live in a really different part of the Marvel universe. You know, Luke Cage and Jessica Jones and Daredevil, those shows are kind of connected in Hell’s Kitchen, and Frank Castle kind of lives in a different part of New York.

And that’s the good and the bad. It’s good because it gives you more storytelling freedom. But it’s the bad of it in terms of how hard you have to work to create a story that makes sense enough to bring the other characters into his world. But I love that kind of stuff and I say the more the merrier.

Well because Karen came from Daredevil.

Felicia: I don’t spend much time on Tumblr, but I absolutely am aware how people are shipping them and it’s so funny because the first time that I heard some sort of fan storytelling about the two of them I thought, I didn’t even realize that people thought they were about to kiss because it wasn’t what we were doing! And I think it is just a testament to how strong the chemistry is between them, which is wonderful. It was strong on Daredevil, and it’s even stronger once she then came onto the Punisher.

But it wasn’t written like “And then they almost kissed.” Like, that’s not in the script. That moment was not built in, it doesn’t really exist. But they have such great chemistry, you can’t really put them in the same tiny place like, oh, an elevator, and that chemistry not explode all over that little space. So that’s what happened, but it’s really a relationship of two people who make a leap at that moment to trust each other even more, to believe in each other even more, to do whatever they have to even more.

You’re an extremely busy woman, and as a busy woman myself, I know we can’t help adding more to what we’re already doing. So do you have any projects you’re working on?

Felicia: I think that in terms of our creativity, your brain just never stops. I’m very much in the Punisher space because it’s time for the second season in terms of the storytelling and the writer’s room and that kind of thing. But you’re always wondering what am I gonna do next? And for me, I’ve been working on a screenplay for two years that I’m writing for me to direct. I’m very excited about it. It’s inspired by my own life and my relationship with my father.  2018 will not end without that thing being finished and me prepping to direct it. That’s very important to me.

And of course, having read comic books my entire life, loving them my entire life, working on The Punisher, I’m looking around for which one I might adapt, whether that be for a TV series or a film, that is my goal, is to stay in this world that I love and finally have found my way into. Now that comic books can become part of my writing career I’m very excited about that and I wanna get serious about what’s going to be mine? What will I adapt? What will I create?

Teaching by itself is hard, but add everything else you do it seems almost impossible. You fly into the University of Texas Austin to teach in the Radio Television Film Department. Why do you teach given everything else on your plate?

Felicia: It’s exhausting sometimes, but I think before I ever thought I would be in this business, I loved education. And I also think because I come from parents who were undereducated, working class, blue collar family — where my father really stressed education as the great equalizer. And that if I wanted a different life, if I didn’t want to be poor, if I didn’t want to live my entire life on Medi-Cal then I’d better go to college.

So it has always held a very specific and important place in my life, in my heart. And because it was part of my dreams as far as I can remember, I always equated getting an education with bettering my life and being more financially stable. It remains important to me when I see kids who have backgrounds similar to mine in my classroom, I try to support them any way I can because it also is hard if you don’t have anybody to fall back on or to help you financially, or just even emotionally to support you.

I’m there because it’s important to normalize the existence of someone who looks like me. In mainstream America, you can go through your whole education and never see a Black face or a Black woman teach you as a Black person.  So that difference is accepted and celebrated as opposed to something to stay away from and to separate us.

And so when you say “Why are you flying back and forth to Austin every week to teach?” It is because I absolutely love teaching, I love being with students. I love being with young people who are making decisions to do what I do — so that anything that I can impart that might help them in their quest to be artists who can make a living being an artist. I just love it. I love new voices, I love new thoughts, I love new ways of looking at things creatively and interacting with those people who are these brilliant young minds.

With everything you do, you must have a tight schedule. So what do you to relax or have fun?

Felicia: I can tell you what I enjoy and when you have like a half hour and that’s all you have, then it’s just time to take my dog for a walk. And that is probably one of the most relaxing things that I can do because I enjoy her company so much. I really, really do. And she makes me laugh every day, she keeps me sane. She truly is my road dog, she goes everywhere I go. So that is something, and a way that always keeps my stress level down is the fact that she is always somewhere near.

I think that I believe in and love a great spa. If I could, I would live at a spa. So when it gets really, really intense, then it’s time for a weekend at Bacara, which is one of my favorite spas in Santa Barbara. I love to read. I’m particularly interested in biographies, that’s mostly what I read actually.

I’m always scheduled up to my ears. But at the same time you just have to remember what’s more important than your own happiness? So it’s something I try to remind myself is to choose myself. At least once a day, choose me.

Join Felicia D. Henderson and the Cast and Crew of ‘Soul Food’ to Support Sybrina Fulton