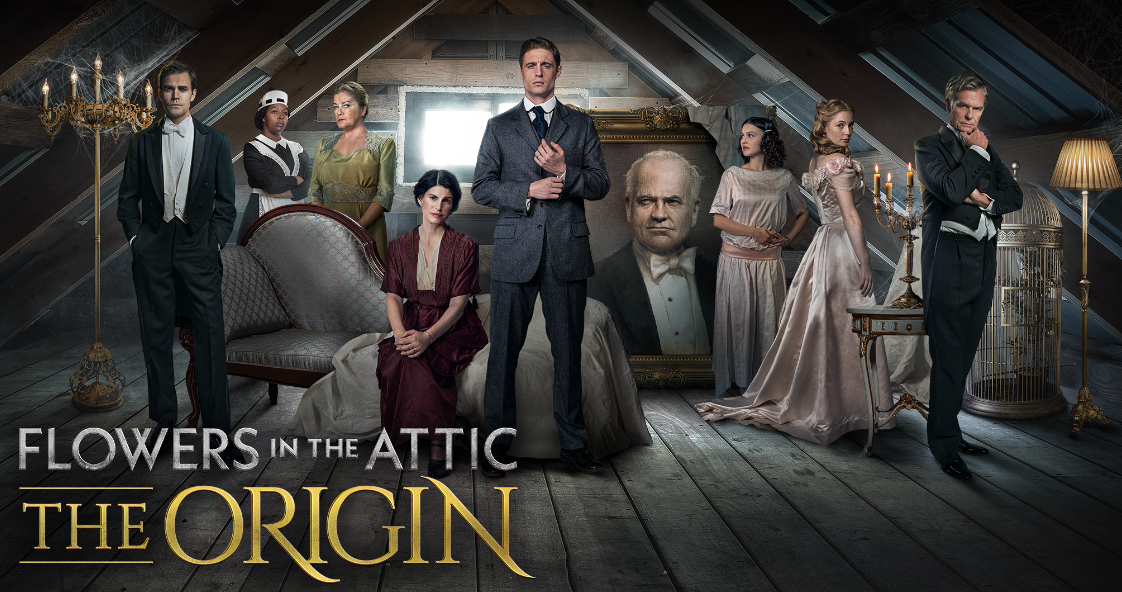 The saying goes that the first murder is the hardest. For Olivia Foxworth (Jemima Rooper) in Lifetime’s new miniseries Flowers in the Attic: The Origin, the hardest is her first turn of the outside lock on a door in the east wing of Foxworth hall that leads to an infamous attic. No, this moment is not the one where she locks her four grandchildren away.

This first turn of the key is years before when Olivia and her perverted husband Malcolm (Max Irons) lock up his 19-year-old stepmother Alicia (Alana Boden), pregnant with Malcolm’s rape baby. A baby who would one day become the Corinne Dollanganger we know from VC Andrews’ still-scandalous Flowers in the Attic. She marries her half-brother and eventually schemes to kill off their four children to access her significant inheritance. Depravity runs in the Foxworth family.

VC Andrews fans are a peculiar bunch. So many of us read the books way too young in the 80s and were forever marked by the twisted story. Even those coming to the Flowers in the Attic series more recently go through the same shock as we younguns did back then.

This disturbing five-book tale of incest, child abuse, generational trauma, and arsenic-laced donuts has aged like gothic wine in a blood-soaked barrel thanks to VC Andrews’s lyrical and compelling prose. Yet the film adaptations have left much to be desired — filmmakers shied away from taking the source material as seriously as it has deserved. That is, until Lifetime’s new miniseries, Flowers in the Attic: The Origin.

The show is based on the posthumously published, Garden of Shadows: a prequel started by Andrews before her death and finished (rather perfunctorily) by her ghostwriter Andrew Neiderman. The Origin takes its time developing the back story. The Origin also adds important important new characters and fleshes out existing ones to make a three-dimensional portrait of Olivia and the Foxworths unlike any that has existed on the screen to date — or even comprehensively in the source material.

In Garden of Shadows, Olivia Winfield begins as an unattractive, cold, hardened, and bitter woman whose resentments, in particular, towards other women only grow. It’s easy to imagine book Olivia would eventually reap such cruelty on children and even delight in it. But the Olivia Winfield of The Origin created by writers Connor Good, Amy Rardin, and Paul Sciarrotta, is brought to painful life by the extraordinary Jemima Rooper. She has a much more dramatic character arc that is so compelling we end up at times rooting for her, even though we all know where her horrible story ends.

In The Origin, Olivia begins as a genuine, intelligent, and independent woman who gets sucked into Malcolm Foxworth’s world of abuse and is broken down by it over the decades. Her process of disillusionment is heartbreaking to witness. Unlike the book where Olivia has her own money and could leave at any time, always choosing the violence of remaining, The Origin’s Olivia is trapped by a lack of economic opportunity. This makes her descent all the worse.

“I met a man who turned out to be a monster,” Olivia says and The Origin becomes a cautionary tale about how spending extended time with a monster will inevitably turn you into one, too. It also shows how religion can be used to manipulate a traumatized person to lead them to things they never imagined doing, but can now do under the eye of a vengeful god-figure.

Yet through Jemima Rooper’s exquisite and controlled performance, she never fails to portray Olivia’s innate humanity. This is one of the most challenging characters, arguably of all time, and Rooper has managed to embody her with empathy and compassion. Thanks to Rooper’s artful character development, Grandmother Olivia has gone from a stock villain to a complicated woman whose life went off the rails — and she could never get it back on track. I never, in my VC Andrews-loving life, imagined I’d ever feel anything but disgust for Olivia. Now I do. Give Jemima Rooper an Emmy for each part of this series already.

But Jemima Rooper isn’t the only marvel in The Origins. The writers have added key new characters in housemaid Nella (T’Shan Williams) and her daughter Celia (Evelyn Miller), two of Malcolm Foxworth’s original victims. The fact that they are Black adds an entirely new level of nuance that this story needed as Nella’s family becomes the conscience and heart of this gruesome tale.

Their presence also acknowledges Virginia’s Confederate history and the Foxworth family’s history of slave-owning — an important detail left out of Andrews’ books entirely. That Malcolm Foxworth essentially developed his future MO as a rapist and serial predator of Black servants. This reflects a history of the south that many conservatives are trying to erase from the history books.

Nella also gives us fresh contexts in which we witness Olivia’s own privilege through her whiteness. She denies to herself that she and Nella are friends, even though she knows nothing of Nella, her family, or even the fact that Olivia’s own husband had abused her. When Nella finally calls Olivia out on the power dynamic of servant and mistress, Olivia flips into Karen mode.

She reminds Nella that Olivia has promoted her “beyond her station” and could take her livelihood at any moment. This was such a white woman interaction that Black and other women of color experience regularly, with a varying spectrum of awfulness, even now, 100 years after the events of The Origin. Olivia Foxworth in this iteration is all too real, on so many levels.

The Origins has also made Olivia’s second son Joel (Luke Fetherston) explicitly gay. This is something only suggested in the book — and incredibly eschews the “bury your gays” trope. The writers reimagined Joel’s story from the book of a freak, accidental death in an avalanche and instead turned it into a stint in a sanitarium to cure his homosexuality resulting in his escape from the toxic Foxworth family with the man he loves, Nella’s step-grandson Harry (Jordan Peters). Finally, someone gets a happy ending in Flowers in the Attic. Maybe we will get a Joel and Harry spin-off series one day.

The fantastic new characters aren’t the only thing that sets this miniseries apart from every other VC Andrews adaptation. The female gaze is ever present in The Origins. It serves to handle so much difficult content sensitively, including scenes of sexual assault that contribute to the plot and character development. The production value is stupendous. Every actor is on point. There are no hokey performances here to be found, even if Malcolm’s southern drawl might come and go.

One of my favorite things is how, once again, there is a new version of Foxworth Hall itself. We could read this as a continuity error, but I interpret it as the inconsistency of memory. Nobody remembers things the same. We often don’t even remember our own memories as they happened, especially after trauma. It serves an internal logic that every on-screen version of the Foxworth mansion looks different, and The Origin’s version is it’s most imposing.

Flowers in the Attic: The Origin is the adaptation of our weirdly beloved VC Andrews stories fans have been waiting decades for. Finally, someone took the books seriously and put together a production that matches the tone and content, bringing the story to life in its most realistic version yet.

I sincerely encourage Lifetime to follow in The Origin’s footsteps and create a miniseries of each book in the Dollanganger series. All of those so-bad-it’s-good adaptations could use a proper retelling that embraces the gothic power and horror of these twisted tales, rather than the camp. The Origin sets a new bar not just for Flowers in the Attic and VC Andrews adaptations, but book-to-screen adaptation in general: a rare example of the miniseries far surpassing the book.

Flowers in the Attic: The Origin is streaming on Lifetime TV and Lifetime Movie Club.