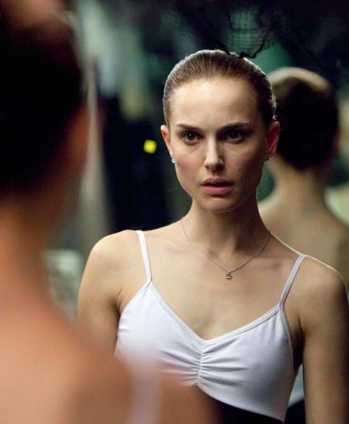 Ballet and whiteness are inextricably linked, which adds another level of horror to Black Swan for non-white viewers.

Nina (Natalie Portman) is a fixed member of a New York ballet company’s corps who has big dreams of one day being the prima ballerina, just like every single one of her colleagues. She lives with her overprotective mother Erica (Barbara Hershey) in the upper fancy side of Manhattan in an apartment big enough for her to have a home studio for rehearsing. But all is not as perfect as it might seem on the surface in Darren Aronofsky’s ballet horror noir Black Swan, as Nina’s dream to play the Swan Queen in Swan Lake comes true and she begins to crack under pressure, sometimes literally.

Nina’s dramatic descent into paranoia, delusion, and hallucinations along with bouts of self-harm are in many ways mirrored the dark version of Swan Lake the ballet company is putting on. She describes the plot in a succinct nutshell: “It’s about a girl who gets turned into a swan and she needs love to break the spell, but her prince falls for the wrong girl so she kills herself.” In Black Swan, Nina’s quest for perfection leads her to hugely self-harm on opening night in order to finally be able to let go and dance the performance of her life. By the movie’s end, we are no closer to uncovering just what had been real of Nina’s life and experiences versus what she had been imagining as her psychotic break deepened.

Black Swan has haunting themes of duality and the fragmented self, beautifully demonstrated through the visual metaphors of mirrors and reflections throughout the film that lead us to question Nina’s reality. The relationship between Nina and her has-been ballerina mother who never left the chorus is profoundly, but quietly, disturbing as Erica controls and caresses her daughter in ways that suggest a creepy V.C. Andrews incest vibe. Using ballet as a framework for a body horror movie is a genius move, showing us the external beauty of these ballerinas as well as the cracked bleeding toenails, starvation, and other abuse they must endure for this high art. Yes, Black Swan has a number of moving parts that are powerful and mirror the difficulties for women in competitive industries like dance. But at the same time, Black Swan is also a whole heap of tulle-wearing white devilry, and we need to talk about it.

What’s white devilry? In Terence Nance’s phenomenal Random Acts of Flyness, he breaks down the notion of white devils and white devilry in so-called anti-hero characters such as Walter White from Breaking Bad, Tony Soprano, Dexter Morgan, Nurse Jackie, and a number of others who are all committing a host of crimes, but the audience is expected to root for them anyway. However, when or if a person of color would follow these same anti-heroic narrative arcs, we’d be seen as victims of racial, social, and even cultural pathology as villains, not the nuanced reception white devils receive for the same exact crimes or antisocial behavior.

Back to Black Swan: Let’s start with Nina. From the beginning something isn’t quite right with her. She talks to her reflection in the mirror. She has a reputation at work for obsessively staring at her colleagues and saying nothing when she’s called out. When her psychological break gets properly revving, she steals from her colleague Beth (Winona Ryder) and might even be responsible for stabbing her in the face while she was already recovering from an accident in the hospital. The only consequences Nina faces are those she inflicts on herself.

Nina’s mother Erica has an unhealthy fixation on her daughter, which includes covering her own bedroom walls with terrible portrait attempts of Nina she makes, sometimes while sobbing uncontrollably. Erica feeds Nina icing with her own finger and insists on helping her adult daughter dress and undress. There is no lock on Nina’s door, so she sometimes wakes to find her mother sleeping in there. Nina is forced to use a plank of wood to get any privacy in her own room. Erica will likely never be held responsible for the psychological damage she did to her daughter that led her down a path of self-destruction.

Thomas (Vincent Cassel), the ballet director, sexually harasses his employees on the regular. When Nina comes to beg for the role of Swan Queen, he nonconsensually kisses her. After she bites him in retaliation and he casts her, his next move is to give her a “homework assignment” to go home and masturbate. When her dance performance isn’t pleasing him, he sexually harasses her and verbally abuses her some more as if this somehow will help her dance better instead of contribute to her psychological decline. He’ll likely face no consequences either for the part he played in Nina’s demise. His inappropriate behavior was an open secret that’s tolerated in the ballet company because he’s “brilliant.”

A key feature of white devilry is that these folks don’t often face external consequences for their harmful actions, and if they do, the audience is meant to sympathize with the injustice of it.

But aside from the white devil characters in Black Swan, I can argue that the ballet industrial complex itself is fueled by white devilry and white supremacy. If it wasn’t, then why can I count on one hand the number of Black dancers who have ever come to prominence in ballet? Misty Copeland’s journey to becoming the first Black prima ballerina was shaped by too many critics commenting that her “physique” wasn’t ballerina enough — a racist criticism often lobbed against Black women for looking too much of whatever excuse (too masculine, too fat, too dark, etc), even when they don’t. When Copeland called out the Russian Bolshoi’s ongoing use of blackface in their performances, they doubled down and said they had no intention of stopping this offensive practice.

Once upon a time I myself was on a path to being a dancer, and ballet was where I started. But my dreams of being even a corps ballerina were dashed before I was even nine years old. I was always a tall girl, and my Sri Lankan heritage bestowed on me the “gift” of dark hair on my arms and legs, as well as my face. My Russian ballet teacher took an instant dislike to me and made no secret that I would soon be too tall for ballet, and even if I wasn’t, I’d never be pale enough to actually get cast. It wasn’t the first time I’d heard these kinds of things; my white American grandparents made no secret of their own racist thoughts about my Sri Lankan dad and us mixed kids. But dance was a sanctuary for me, and after my teacher told me my Brownness was a disqualifier for ballet, I stopped doing it. Still, to this day, when I’m standing in place I naturally place my feet in first or second position, toes turned out like ballet trained me to. I loved ballet, but because of how I looked it could never love me back. Watching Black Swan suggests I may have dodged a life of pain even though I would rather have had the choice myself.

Ballet and whiteness are inextricably linked, which adds another level of horror to Black Swan for non-white viewers and former would-be ballerinas like myself. This is a world where the usually-protected class of white women are acceptably abused, starved, sexually harassed, and assaulted, all for the illusion of perfection on stage that ultimately might have cost Nina her life in Black Swan. Misty Copeland’s experience in real life shows us just how much more a woman of color has to do to combat the white devilry run rampant in the ballet industry, and it’s a horror movie in many ways far more painful and tragic than Nina’s in Black Swan. On its tenth birthday, Black Swan continues to highlight the white devilry that not only shapes ballet, but in so many ways continues to drive the Hollywood machine itself.