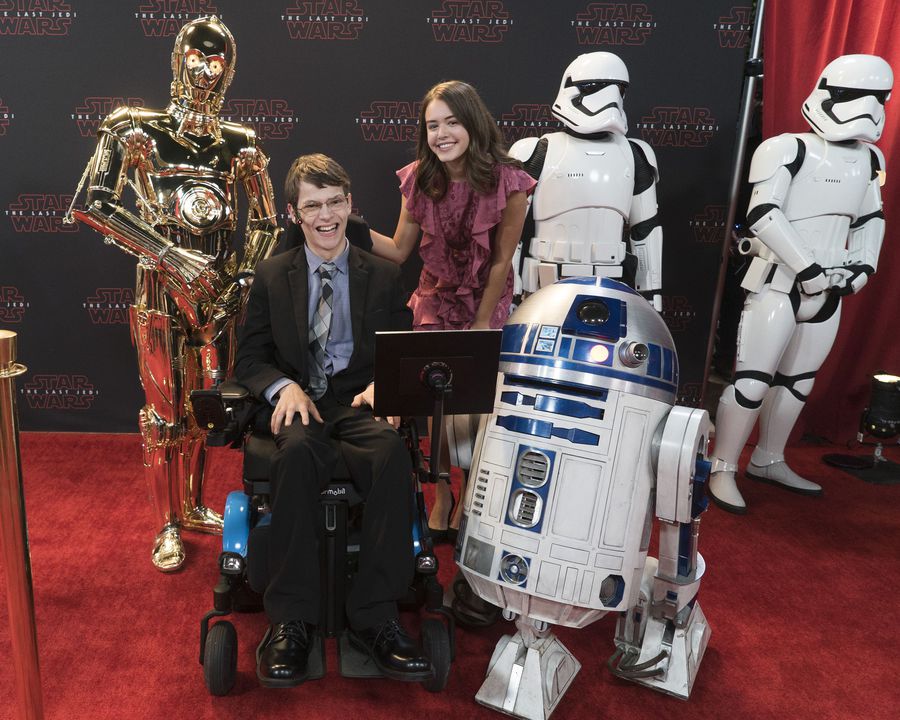 Star Wars has made it to Speechless and I couldn’t be more excited! Coming just before the premiere of Star Wars: The Last Jedi, this episode of Speechless was a great addition to the Star Wars mania. I think JJ and Ray may be just as big of a nerd as I am. Although, I could only wish to attend the premiere and meet Kevin Smith and Captain Phasma!

We all have that one friend, or family member, who is our ride or die, a partner in crime. That one person who will sit with us for hours, as we both try to be the first ones in the theater to see the latest comic book or Harry Potter Film and the last ones to leave after the credits and all 17 post-credits scenes are over. I myself can think of the one person whom I can’t wait to see Star Wars with.

Maya’s cool, yet dramatic presentation of two tickets to the premiere of Star Wars: The Last Jedi was the best. JJ was ecstatic. As was Ray, who assumed it was he who would be going with JJ. Apparently, the two of them have seen every Star Wars film together. It was a no-brainer for the family, but they still made Ray dance for the tickets. Literally, dance for the ticket.

“We need to talk about how this family wields power” – Ray

When all was said and done, JJ was excited that Ray was going with him. He even paid for a limo so they could arrive in style. When JJ mentioned they would have to leave at 4:00 pm, Ray was quick to say no because he had plans with his girlfriend and her brother who, as a reminder, JJ hates. Not only is this a bad brother move, but who wouldn’t cancel so they can be on time for a Star Wars movie premiere? Honestly, I just don’t understand Ray. I was 100% on JJ’s side at this point. Once in a lifetime premiere or date that can happen another day? The choice is clear.

JJ decides to take a girl from his class to the premiere to show Ray what it feels like to be blown off for a girl, especially for something they bond over. The lesson would have been learned earlier in the episode if Ray hadn’t decided to go with Taylor’s brother and find a way to the premiere. Thanks to Kevin Smith, Ray made it despite JJ. The premiere became a battle on and off the screen. I was trying my hardest to get a glimpse of anything on that big screen. I feel like they were actually watching the new movie and I wanted any glimpse of Finn I could get.

The battle continued between the two DiMeos in the form of a small lightsaber battle. So cool, yet so distracting. Part of me was like, woo yea a lightsaber battle! The other part of me was like, oh no you’re missing the movie! It seems JJ was on the Dark Side as he even commanded Captain Phasma to mess with Ray. The fight came to a stop when JJ needed help going to the bathroom. His date could not help him with that, but his little bro could, and did. After apologizing to each other and JJ expressing how he felt jilted and liked hanging out with Ray, the two made up.

Back at home JJ and Ray did what anyone would do with prop lightsabers. They had a full-on lightsaber battle. Jumping off couches. Knocking over lamps. Who hasn’t tripped over furniture while wielding a glowing lightsaber? We learned JJ and Ray have a pretty great relationship. Especially since Star Wars is involved.

This was a great episode. Anything with a running theme of Star Wars is great. I am ready for a new episode of Speechless and even more ready for the release of Star Wars. Thanks, ABC. Way to keep my appetite alive.

Catalina Combs is an aspiring film critic from California. She loves reading, writing, film, baking, music, drawing, traveling, Disney, and playing soccer. Her life usually revolves around all of these and her family. The oldest of six, Catalina tries to set a good example for her siblings. She graduated from Santa Clara University in 2010 with a BA in English Creative Writing and is pursuing an MA in Film. I also blog on WordPress and contribute to the website Examiner.com. Twitter- @tiggercraze | Facebook- Cat Combs | Instagram: