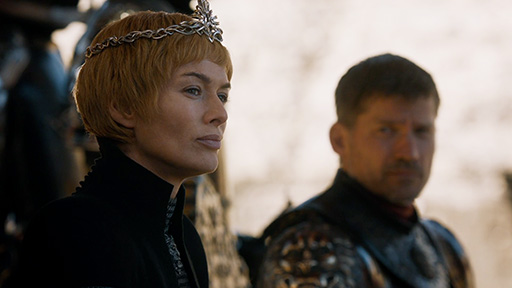 This week’s Game of Thrones season 7 finale was amazing! I have never been so misguided in my life. Thanks, Game of Thrones writers. What I’ve learned this season is that A) Cersei is legit evil, B) Sansa is smarter than she lets on, and C) misdirection is EVERYTHING!

Let’s start with Cersei, shall we?

From the beginning of the episode, she was already plotting to kill everyone if the meeting went sideways. You haven’t even heard anyone’s argument, and you are ready to have The Mountain take them out? Just plain ruthless. Her face and the look of complete disgust at Tyrion and his companions was priceless. She has the best resting B-face in the world. She is so extra ruthless and I love seeing it on screen. Forget dragons, you’re late.

Then, I was duped. It was the first time I had ever seen Cersei Lannister scared of anything. The look of horror on her face was so convincing when the wight rolled out of the box and made a mad dash toward her! Not to mention, Euron’s complete look of horror as he was like, peace out peeps, you’re on your own. Then after a closed-door session with Tyrion and him realizing she was pregnant, Cersei agreed to send her army North to help fight the dead. I was singing, U-N-I-T-Y! Everyone was ready to make plans and link arms and defeat the Night King. I was so pumped! Then, oh then, Jaime was getting his men together and Cersei was like dude, you’re dumb. I’m not sending my men north and Euron is getting me a large army called The Golden Company with elephants and stuff. Elephants?! Say what now? Loyalty is off the table and Jaime is done. Done I tell you! In a span of minutes, I was very confused and frustrated and fully hating Cersei more than ever. Can you imagine an ice zombie elephant?!

My hatred for Cersei was, at times, overshadowed by my fluctuating opinion of Sansa. In the beginning, she was telling Littlefinger all the secrets, including the one about Arya being a Faceless Man. I hated her then. Then there was this whole worst case scenario convo. All of which had me really thinking, how dumb can this chick be because we all know Arya has no intention of being a Lady. Then the trial. Lord, if I didn’t stand up and clap my hands while pacing back and forth in front of the T.V. I mean, yes girl! I love you! I knew you couldn’t be that dumb. These writers really had me going. I was sure all those soldiers in the back were about to be dead as Arya ninja’d her way out. But, alas, Petyr Baelish got what he deserved and it was glorious. Sansa clapped back and was like, “I’m a slow learner, but I learn.” Yes, you do. It for sure takes you awhile, but you got it. Littlefinger was sentenced by Sansa and sliced open by Arya. Team work ladies! This is why the Starks have always been my favorite. “The lone wolf dies, but the pack survives.” Amen.

So, these Game of Thrones writers were really on one for this episode. I was happy to see Sam and Bran reunite, but with all of Bran’s reunions this season, it was awkward. But Sam’s facial expressions are comedy. Bran, for some reason, thinks it’s time for truth telling and continues to spill the beans about Jon Snow’s Targaryen heritage. Then Sam tells the Three Eyed Raven, I mean Bran, something he doesn’t know. Gasp! I was rolling. Sam is forever the smartest person in the room. As thrilled as I was to finally confirm what we all knew to be true, to hear it whilst watching Jon and Daenerys get it on was quite unsettling. You know the face Dr. Sattler gets in the raptor feeding scene in Jurassic Park…yeah, that was me the entire time Bran was talking and Jon’s butt was on screen.

I don’t know why, but for some reason, I completely forgot about the Ice Dragon. I feel like my brain just blocked it out, so when it came on screen, I was literally like, oh crap this is happening. The wall is coming down. The dragon “fire” is so cold it’s hot, like a million-degree dry ice burn. It was fascinating at first, but then I remembered Tormund was on the wall. I panicked for a second before solidifying my theory that he’s fine and will be able to be in the love triangle that is soon to be between him, Brienne, and Jaime. Finally, the Night King and his army cross over the wall.

Now what?! We must wait so, so long before the new, albeit final, season of Game of Thrones where all hell breaks loose. Let’s face it, so many people are going to die next season. I already had a scare when I thought The Mountain was going to slice Jaime in half. But now, the end is nigh and no one is safe.