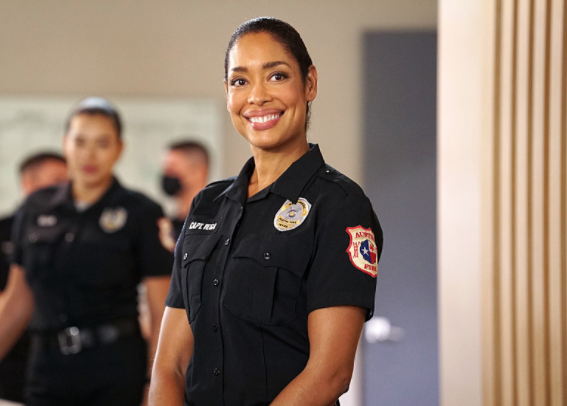 BGN got a chance to chat with the lovely Gina Torres about her new series regular role as Tommy Vega in Season 2 of 9-1-1 Lone Star on Fox. Oh captain, my captain. We are big fans of Torres at BGN and were thrilled to chat not only about the show but her Afro-Latina heritage and career full of kickass female characters. Check out the interview below.

Congrats on 9-1-1 Lone Star. Such a pleasure speaking to you today. I got to see the first episode of Season 2, and I am all about the action, the gore, and it’s just the best. How was it incorporating the social distancing, the masks, and the quarantine standards off and on camera?

It’s good to speak to you today. By the way, I love the title of Black Girl Nerds. I mean Black girl nerds, it’s everything! I’ve been a low-key Black girl nerd my whole life.

I cannot pick any of my crew members out in a lineup. I have no idea what they look like, but I’m sure they’re lovely people. They are so diligent, committed, and incredible at making all of these protocols work, as are my castmates. We love to work, we love this show, we want to make the show, we want to make more of this show, and we’re all feeling the same way about it. It’s been a relief, like a weight off your shoulders because you never know how people are going to behave. But our microcosm is intact. It’s just fantastic, and rightfully so because we are portraying frontline workers. We are portraying our heroes of the day and every day right now, and we need to respect what they’re going through and represent them properly. So for that, I’m incredibly grateful.

You mentioned portraying frontline workers. Is there anything working on this show and playing your character has taught you about yourself, or just about life in general?

It solidifies things that I already knew, which is, life is fragile. It is a gift. It is random. Sometimes completely random, and you can add whatever your faith is. You can tell yourself there are reasons for everything, when you’re in the thick of it, and you’re in the middle of it, and when you’re coming out of it. You always try to look for the silver lining, but it’s random. Here we have these angels that appear at your side on the worst day of your life. When something completely random happens, that you can’t really quite wrap your brain around, they help you through it. What it’s taught me about myself is, I pray and hope that I can be as clear-minded in those kinds of situations as they are.

One thing I noticed about this show was how diverse the cast is. I’m loving it. Can you talk a little bit about the diversity on the show?

It was one of the reasons that I was attracted to the show in the first place. This was before I was on the show. This was before I was even offered the show. It happened to be on, and I looked up while I was making dinner, and I said, “Oh, that’s a great looking cast. Wow.” I wasn’t really paying attention, and I thought, “What is this, what am I even watching?” It didn’t even occur to me that it was one of these franchises. Then, sure enough, there comes “911, what’s your emergency.” Then you know, Rob Lowe, so cool. It was sort of this slow rollout of what the reality of the show was and the makeup of the show.

Then I got offered to be on it and pitched the part. It was like catnip. Not only do I get to be this incredibly badass and layered woman, but I also get to bring so much of myself to it as an Afro-Latina because, I told him [Tim Minear, eExecutive producer], “I know you wrote her thinking that she’s Black. I need her to be Afro-Latina.” He was like, absolutely we can do that. Then we’re shooting and we’re off and running. While they set up other shots, all the actors sit around and we talk, about our lives and about various experiences. I can’t lie to you, it’s really quite emotional. It still can be when I’m looking at all of these beautiful diverse faces after decades of being “the one” in the room. It’s just a beautiful, beautiful thing. More please!

Absolutely. I want to touch on something you just mentioned. The character was originally written as a Black woman and you said, “Hey, can we make her Afro-Latina?”

I don’t think she was specifically written Black. Tim Minear wrote her for me, so his perception of me as this woman of color in this world and because I present Black. It wasn’t necessarily anything other than, I’m writing this for Gina. That’s Tim, in the best way. It’s like, I know this really great human being, so I’m going to write this really great part for this really great human being. So, I said I want to make it a point that she’s Afro-Latina because I think we need to see more of that and we need to sort of slap a label on it. This is what it looks like to be Afro-Latina.

How often do you get to do that or have you gotten to do that, where you incorporate your heritage and what you stand for into your character?

Not very often. It just kind of depends on who’s writing it, who’s open to it. I present Black in the majority of the roles that I go up for. Sometimes for men, as Jessica Pearson was originally written for a man. There was a moment, years ago, 20, oh my God, 20 years ago, when I auditioned for the role of Anna Espinosa on Alias. And her name wasn’t Espinosa, it was Anna something and she was written straight-up Russian. They were looking for a super spy. I had been in front of that particular casting agent, April Webster, many, many times. She was one of my fans and one of my champions and still is. It didn’t matter to her that the part was written Russian. She said, “I think you need to see Gina for this part because she’s everything that this role is. She’s just not Russian.” So I went in and I auditioned in just my regular American accent.  Then they said, “Do you speak Spanish?” Yes, I do. They said, “Can you do it in a Spanish accent?” I said sure I can. Then they were about to dismiss me and I said, “I can also do it in a Russian accent.” They were like, “What!” As actors, we fool around with Russian accents all the time. Now, it was awful, but it was good enough. I mean it was really like Rocky and Bullwinkle Natasha. But I sold it and they loved it. They thought it was great. JJ Abrams said, “You know you didn’t just do the accent but you changed. Like you physically changed from your stance and the temper of the Russian character versus the Hispanic character.” I was like, “Well, yeah.”

So I say all this to say, I got the part and then the writers brought me in and said, “Listen, congratulations, you got the part, we love what you did. We’re going to make her Spanish.” and I said, “Please don’t.” They’re like, “What do you mean?” I said, “I’m Cuban. I’m Cuban American. I’ve grown up in the Cold War. There are so many Russo-Cuban babies in the world. More than you can possibly imagine and nobody talks about it and nobody knows about it. But this is a reality. Russia occupied Cuba for a really long time. They had a really close relationship. I know this being Cuban having gone to Cuba as a teenager, having stayed with family. These are things that most people don’t know. It would be so much more interesting and so much more fun if I was the face of a Russo-Cuban spy.” And they went for it.

So that’s how Anna Espinosa was born. I loved that character, I love that story, I love that at that stage in my career I said, “I’m going to show you a little something that you might not know.” That’s kind of been my career whether I wanted to or not. I’ve ended up being the face of Afro-Latina without people even really realizing and educating them on what that means. Whether they want to incorporate it into the storytelling or not really is up to them. I never stopped being who I am.

That is so inspiring. It’s interesting because your whole career, you’re playing these amazing, boss, female roles. Do you actively seek out these types of roles, or is it literally by the grace of everything you’ve done and people you work with that they know that this is your role?

Yeah, these women follow me everywhere. I’m this closet nerd. I’m a goofball. Anybody who’s known me for a while understands. In fact, the man who plays my husband on the show, Derek Webster, the first day I saw him when he showed up on set I just got really giddy, jumping up and down, and it was really hard to maintain social distance at that point. Later he said to me, “I know your work, I’m a big fan of your work, I’ve watched you for years, and I did not expect you to be that light of a person.” I’ve been walking around in this body that’s almost six feet tall, pretty much have always been athletic, have a fairly deep resonant voice, and people confuse that with authority. My ex-husband used to say to me, “You have no idea you have an innate authority, it’s just a part of who you are.” So I guess that’s what I bring into the room. When I walk into a room, they’re like, “Okay I guess we’ll follow her, she seems to know what she’s doing.” So yes, for that reason I’m so thankful I’ve gotten to play such incredible women over the years throughout my career.

So, you know we love you, and Tommy Vega is a great role. You definitely gained a massive following from the fantasy and sci-fi stuff. Can we expect any more roles in the sci-fi and fantasy world from you in the future?

I hope so. Wouldn’t it be lovely! Right now I’m kind of getting that a little bit from doing my voiceover work and in the gamer world. But it would be great to visit that world. I’d love to get the call, let me put it that way. Still got some fight in me. I still have a strong side kick.

This show makes me so happy. I loved Season 1, and I’m telling you, not just because I’m in it, Season 2 is something else. We’re coming out hot!