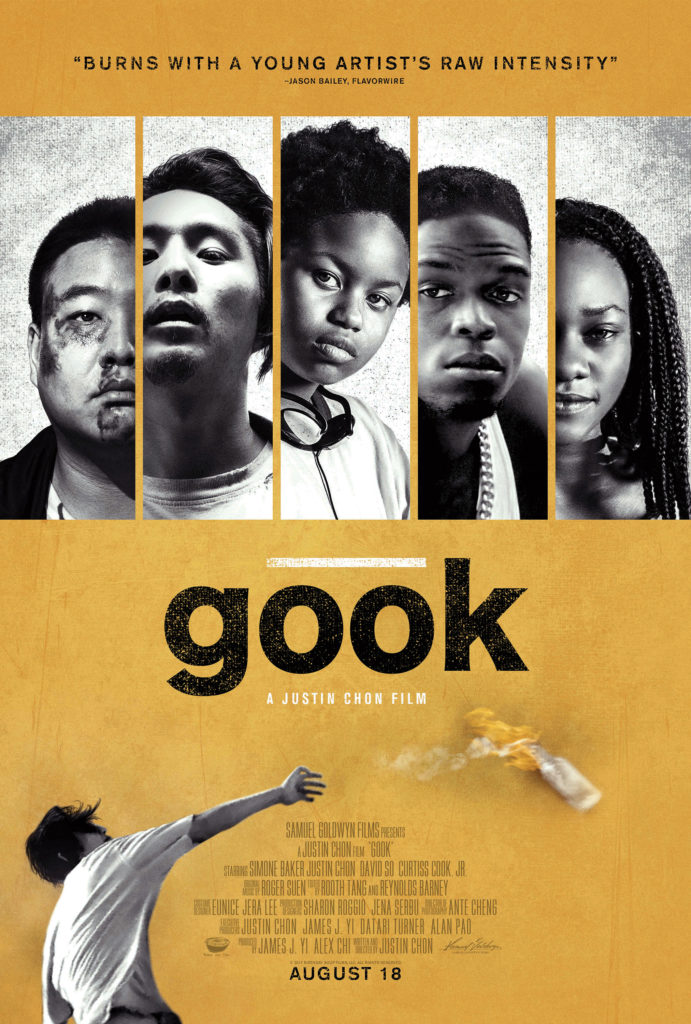 Note: This review does contain spoilers from Gook. I included spoilers as they were an integral part of my criticism and I felt obligated to include them.

Set along the backdrop of the 1992 Rodney King riots, Gook follows a day in the life of two Korean brothers and their adoptive shop-girl, Kamilla. Eli (Chon), the diligent brother, is steadfastly committed to maintaining the family business, a ladies shoe store in Paramount, California; while his lackadaisical brother Daniel has grander ambitions beyond selling ladies shoes in the hood. Played by David So, the character Daniel is a perfect personification of the film’s locale. Similar to Paramount (an area of Los Angeles rarely seen on screen), So’s character – an aspiring Asian R&B singer with unmistakable comedic timing – is also something the average movie-goer rarely sees. Just on the outskirts, South Central LA, where most of the violence of the 1992 riots took place, is the backdrop to the film’s drama. As if they were a soundtrack, news stories and parallel events that led up to the riots lightly play beneath events. Though never the primary focus of the narrative, so much of the rising action is piggy backed on the heightened tensions and the eventual uproar that raged on the streets of LA that summer. Because of this, LA or more precisely Paramount, could very easily be listed as a co-lead in Gook. This is not the gritty LA from Boys-in-the-Hood or the comedic LA of Friday—it is somewhere in between but undeniably accurate. It’s clear Chon draws from his own experiences to inform the landscape. Even a casual resident of Los Angeles, such as myself, can identify the tenor and aesthetic of Paramount and similar neighborhoods throughout LA.

The lead of the film, however, without question is Simone Baker, playing Kamilla, an 11-year-old Black girl who likes to skateboard, cut class, and hang around the store with Eli and Daniel. Though it seems at times that they don’t like her hanging around, by the second act the audience is clued into the fact that she is an integral part of the store. Throughout the day we watch Kamilla help out in the store, and the boys try to sell as much as possible. The store, we learn, is two months late on rent and in dire straights. Eli and Daniel experience the everyday racism that you would imagine Asian shop owners encounter operating a business in a predominately Black neighborhood. Kamilla, the embodiment of innocence, is transversely terrorized by the neighborhood villain, shop owner Mr. Kim. As we follow our leads through what seems to be a typical day, two unanswered questions plague the viewer in the first two acts:

1.  Why is Kamilla so dedicated to the shop?
2.  Why does her family, particularly her brother Keith (Curtis Cook Jr.), hate the shop boys so vehemently?

This hatred cuts deeper than the typical racism we witness inflicted upon the brothers. The slow reveal of the answers behind those questions is a subtle act of ingenious storytelling carefully crafted by Chon. Playing Keith, Cook is somewhat of an absentee but a responsible brother. Working, rather than on a game like his friends, Keith is seemly trying to ‘do the right thing.’ He’s not a perfect brother, but as we unravel the character we learn his complex motivations and Cook shines in each facet of the character. Chon’s direction with Cook is best in the moments where what is really happening is left unsaid.

Many have drawn comparisons between Gook and Spike Lee’s Do The Right Thing – the period, riotous events, and racial dynamic make it easy to draw those comparisons – but I didn’t feel it. Gook, however, did strike me as an expertly-shot hybrid of Clerks and L’haine. When Chon said that he did draw heavily from the French film in the Q&A after the screening at Sundance NextFest, I felt like I’d won Cinephile ‘Bingo’.

I say expertly-shot because the director of photography, Ante Cheng, has skills – without question. It’s mind boggling to think that he was—and still is—a grad student at USC. Using natural light, Cheng’s craft with the lens grounds the film. Though shot in black and white, Cheng still conveys tone within the shades of gray, giving various scenes their own identity. Compare the look of the scene between the boys and Kamilla performing an impromptu dance break and the scene later between Kamilla and Keith as they discuss their mother if you need a prime example.

Gook’s inspiration from early nineties indies is admirable, and it makes it feel more like a classic film as opposed to a period piece. But that nineties inspiration is also where it makes its fatal mistake. Both the original cut of Clerks and final cut of L’haine end on the sudden and tragic death of one of the main characters. In L’haine, Vinz is accidentally shot by the police. It’s shocking and senseless, but it serves a grander point about how people viewed the new multi-cultural youths of Paris. The leads of L’haine Vinz, Hubert, and Saïd, were modern French adolescents and at the time of film’s premiere, most outside Paris thought French culture comprised of Gerard Depardieu, Serge Ginsburg, and Edith Pilaf. The multi-cultural microcosm of Paris was deleted from the narrative of French culture in traditional media. The only time people seemed to pay attention to this ever growing population was when they were attached to a bad headline. A headline like ‘Young Government Housing Youth Killed by Police in an Altercation’ would logically run in the paper the day after the events of L’haine, but the headline wouldn’t tell the real story. Transversely, Kevin Smith’s original cut of Clerks, with the death of Dante in a botched robbery, was tonally off from the rest of the film and he was thankfully convinced to remove it from the final cut. 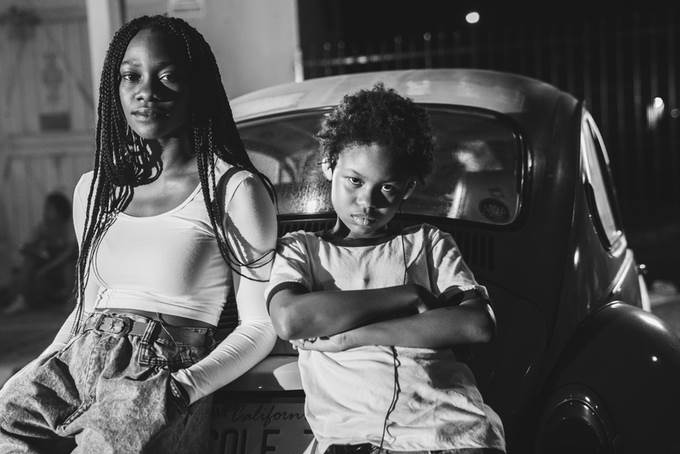 The death of Kamilla at the end of Gook strikes me as more akin to the latter. In the final act of Gook, our heroine Kamilla becomes the ultimate victim and it was infuriating for me to watch.

And to those that would say that’s the point – I would say in return, I am well aware of that point, and I can turn on the news any day of the week if want to see it illustrated.

In Gook, Kamilla accidentally shoots herself as she runs with her brother’s gun to stop an altercation between her brother and the boys from escalating. Admittedly, Kamilla’s death provides us with Chon’s and Cooks’s best acting. It also has a brilliant long shot of Keith and Eli frantically trying to get her to the hospital. These shots are skillful and heartbreaking but despite all this, I was furious at the filmmaker’s choice. After making great efforts to show nuanced characters of color, Chon falls into the exasperating trope of showcasing a Black child’s pain and demise to provoke an emotional catalyst. I’m too exhausted to explain again, why I wish that ALL filmmakers would delete this trope from their narratives. Numerous authors far more articulate than I have explained why it’s problematic and often times damaging to racial progress.

To clarify, I am not accusing Chon of capitalizing on Black pain but he is manipulating the audience to fall in love with a beautiful and quirky Black child, only to have her die tragically in the final act of the film. This was incredibly disappointing from a film that I enjoyed from its first frame. Perhaps I’ve just seen this too many times, and I’m past patience. When we are introduced to Kamilla in act one and her name flashes across the screen in bold letters, I instantly thought ‘If they kill this child I’m gonna lose it’.

And that is exactly just what happened. I don’t care about the skill and artistry we see after this moment; it doesn’t matter.

It is a cheap ploy and frankly, we the audience and Kamilla deserve better. We have seen this time and time again and I can no longer justify it in ANY film from ANY filmmaker.

There are a number of choices that could have taken us to an emotional catalyst without betraying our heroine upon some truly shaky motivations. The idea that Kamilla would take the gun in the first place doesn’t strike me as faithful to the character we have viewed up to that point. This pain of this misstep is more acutely felt because of how genuine the character was presented prior to it.

In the end, I enjoyed most of Gook; I look forward to more work from Chon; and I hope that he revisits writing characters like Kamilla. However, in future, please give us originality as well as authenticity.

What happened with Kamilla in Gook may be accurate, but it’s a narrative that belongs back in 1992—in 2017 it’s just a painful cliché.