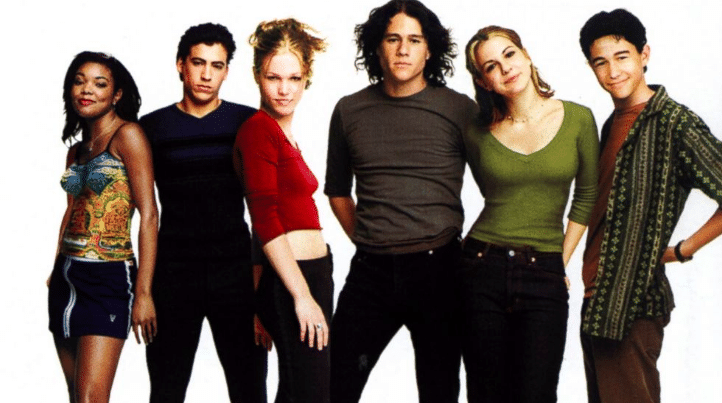 In Shakespeare’s The Taming of the Shrew an independent, headstrong, and intelligent woman is gaslighted, tortured, and otherwise abused out of her willful ways to become a compliant soon-to-be wife whose new goals are making her husband happy. It’s one of Shakespeare’s few plays that had not aged well at all until Gil Junger updated it with his 1999 feature 10 Things I Hate About You.

Not only is the “shrew” an amazing, bright woman who is uninterested in what people think of her, but she also doesn’t lose any of her power or agency by the end of the story. It’s this brilliant move that has in fact aged 10 Things I Hate About You perfectly, even now 20 years later.

After her mother abandoned her family, Katarina Stratford (Julia Stiles) decides that never again will she do something just because her peers or anyone else expects her to, winning her the reputation of “heinous bitch” at Padua High. A label she wears with no small measure of pride. “I still maintain that he kicked himself in the balls,” Kat says to the guidance counselor defiantly after finding out the student’s testicle retrieval operation was successful. Go, girl. 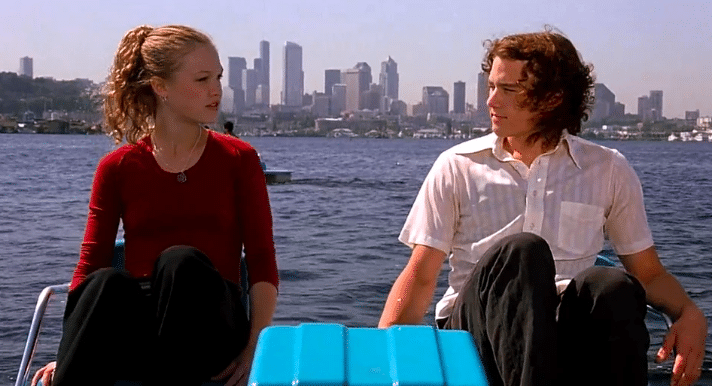 Kat’s sister Bianca (Larissa Oleynik), on the other hand, has fallen hook, line, and sinker for the high school popularity trap, and is constantly distancing herself from Kat’s reputation-ruining antics and attitude. Their father Dr. Stratford (Larry Miller) is a gynecologist who delivers teen pregnancies daily. To shelter his daughters from this fate, he will not allow either to date. Until he realizes that Kat has no interest in dating, and pretends to ease up the rules by allowing Bianca to date only once Kat does.

Padua High is a new student Cameron’s (Joseph Gordon Levitt) tenth school in ten years. As he’s being shown the lay of this new foreign land by social climbing Michael (David Krumholtz), he lays eyes on Bianca and falls into the purest of loves. Devastated that he can never take her out and get to know her better, Cameron and Michael concoct an elaborate plan to get Padua’s bad boy Patrick Verona (Heath Ledger) to take on riot grrl Kat. But with the unfortunate help of rich boy douchebag Joey Donner (Andrew Keegan), whose desire for Bianca and interest in her is only for the outcome of devirginizing her on prom night. Pig. 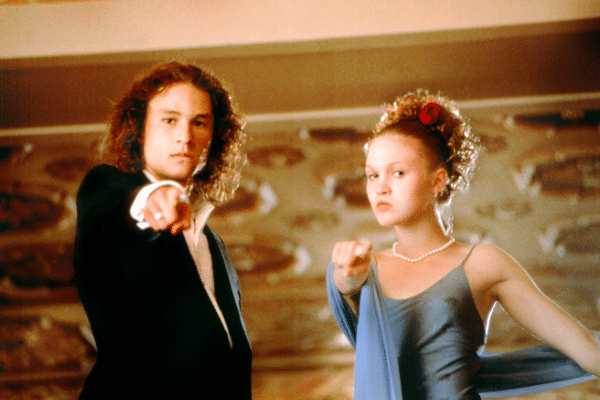 As Patrick and his team of helpers Cameron and Michael try to crack open Kat’s steely facade so Cameron can have his chance with Bianca (and get Joey’s scuzzy hands the hell away from her), Patrick finds himself actually falling in love with this complicated and self-assured woman. “The only thing people know about me is that I’m scary,” Kat tells Patrick. It doesn’t take long for Patrick to see that this general perception is just the tip of the iceberg of Kat’s immense personal strength and character. And as Kat’s chilly exterior warms to Patrick’s undeniable charms and wit — and his incredible smile — so does the entire controlling Stratford family dynamic begin to shift into more relationship positive territory.

“Shakespeare is pretty cool for a white dude,” Mr. Morgan (Darryl Mitchell) says after rapping Sonnet 141. I’ll never forget the first moment Shakespeare and hip-hop married in such perfect harmony. Being a huge Shakespeare nerd, and one who was constantly coming up with new ways to adapt his work to the present, I’d never seen anything like Mr. Morgan’s rap before. It changed me. Even now 20 years later, I get chills when I see that scene. I get goosebumps even thinking about it right now.

Mr. Morgan’s class is also a key component in how well 10 Things I Hate About You has aged over these two decades. He introduces a whole host of social justice concepts to audiences that may never have heard of them, including the idea of middle-class white privilege even for a dispossessed young (white) woman who is an open feminist. In just a handful of memorable scenes, Mr. Morgan deconstructs Seattle’s whiteness, cultural appropriation, and calls for more equitable representation and inclusion in class curricula and beyond.

But Mr. Morgan isn’t the only teacher with a social justice message that continues to be relevant today. Ms. Perky (Allison Janney) the guidance counselor also brings a healthy dose of sex positivity to the narrative through her aspiring designs to be a romance novelist. Her wanton descriptions of sex acts in her book as she searches for synonyms are a hilarious counterpoint to the intense slut-shaming promoted by Dr. Stratford. I loved learning that Allison Janney used her comedic chops to full throttle and actually ad-libbed most of her seminal lines (pun intended). It makes me wish there had been far more outtakes available than the few we enjoy during the final credits. 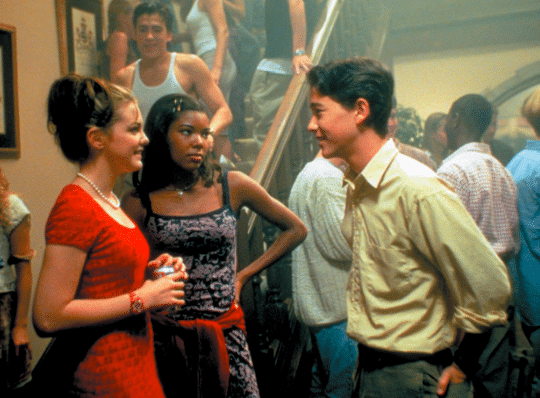 What’s unfortunate, though, is that in spite of all this social awareness and consciousness on these other levels, 10 Things I Hate About You does use an awful lot of ableist slurs as well as featuring a general undercurrent of open homophobia. Sigh. But it was 20 years ago, and while some writers were starting to understand social justice issues, we can see how entrenched ableism and homophobia were that they even didn’t notice this problematic wallpaper back then.

While the successful social and cultural commentaries are the cornerstones that will maintain 10 Things I Hate About You’s iconic status as a modern classic, this is also a story about sisterhood and personal development. Yes, these themes are wrapped in several love stories. But the love stories are what drives the women’s connections to each other — in particular as motherless sisters who are still healing from their mom’s absence — and ultimately gives 10 Things I Hate About You the location of its fundamental heart. Kat’s arc from fierce, feminist fury to being able to express herself through poetry and emotion is the very definition of badass. And that such a strong female character emerged from Shakespeare’s sexist The Taming of the Shrew is a piece of cinema magic indeed. 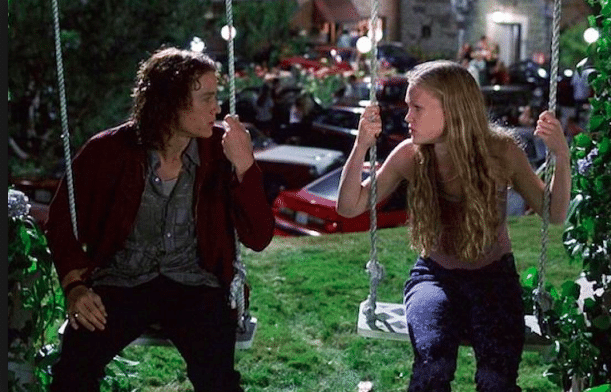 Watching this movie over and over again all these years, I still have to remind myself that it was the first feature film for Heath Ledger, Julia Stiles, Joseph Gordon Levitt, and much of the rest of the cast. They are all so charismatic and feel so accomplished already, it’s no wonder they’ve all gone on to more and more fantastic projects. Heath Ledger’s smile absolutely used to light up the world. It breaks my heart once again that now the only place we can see his singular glow is through the magic of celluloid. *Sniffle*

Yes, 10 Things I Hate About You is a sweet romantic comedy. But it is also a treatise about how young people navigate, negotiate, and balance all of the social, cultural, and personal expectations that swarm around them from all sides. It’s about learning to embrace who you are and finding the community who welcome and support you, giving you room to grow your own way.

BGN Film: ‘The Dark Knight’ Turns 10 and You Can Help Celebrate