Headlander is a Metroidvania action-adventure game based in a futuristic, 70s-themed era. You are the last human left with your head. It’s not even like the Head Museum in Futurama where you can talk. You don’t have any lungs, only facial expressions and the ability take off heads and control their body.

Headlander’s music is very funky and stays within the disco era. The game does take place in the 70s version of the future. Disco mixed with SciFi does get you in the mood to take down some bad guys while enjoying the jargon of the 70s; such as, ‘I like yo style.’ The music goes with the graphics and style of the game, very funkadelic.

The graphics and colors are very crisp. The colours are very vivid and set the scene in every room you walk into. There’s a Fondalrium, which is a room filled with robots rubbing on a shag carpet. The room in itself is very questionable but the colours -there’s no doubt they are gorgeous.

And the Boobtubery! Psychedelic for sure. Just because you are the last human doesn’t mean you feel like it, the robots definitely have the body, style and lingo of your average Baby Boomers & Gen X’ers. Their vocals definitely give it away, very robotic.

The gameplay is very fluid, not too many buttons to memorize, but you don’t have to strategize how you’re going to conquer each room to complete the mission with your abilities. There are upgrade options such as making your melee stronger and a shield that protects your lone head. It’s most def a game about memory because if you remember where you’re going it’ll be a bit easier. 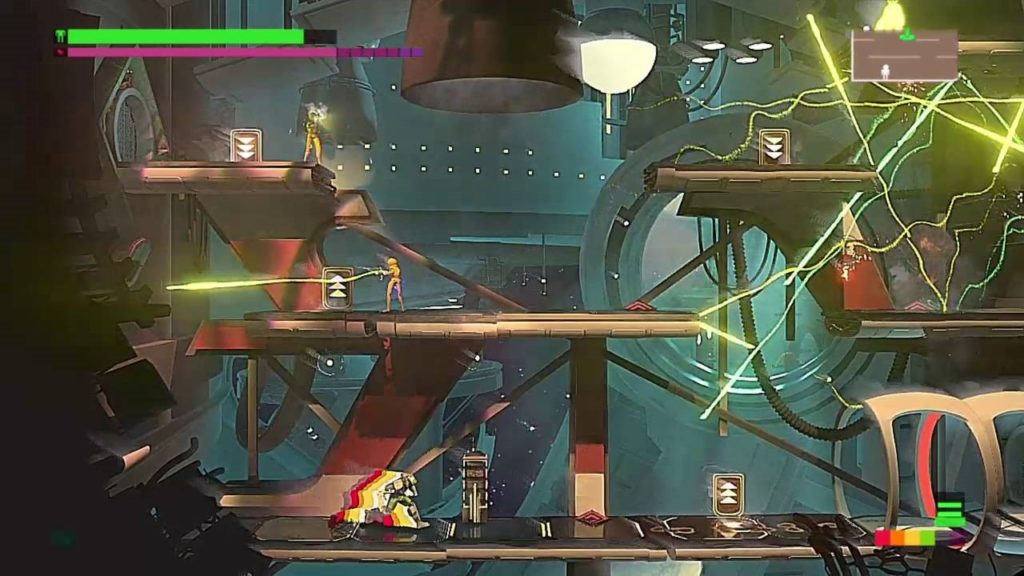 This game is very easy going and could be played repeatedly. It can get intense quickly, meaning it’s easy to get… a head of yourself. There are so many ways to defeat enemies so plan well … or don’t! Winging it seems like it could work too. I really like it. It’s definitely a game I will continue to play. I was super interested when I first saw the commercial on Adult Swim and I’m so excited I had a chance to play it to confirm what I already thought about it. It’s awesome.