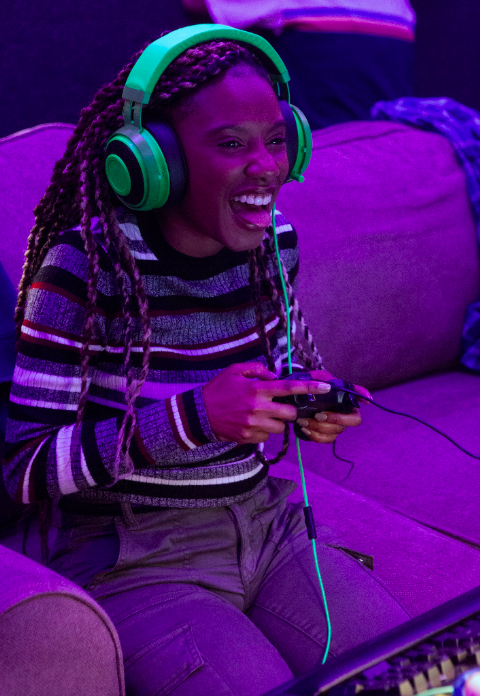 When thinking of the term “gamer girl,” a very specific picture can come to mind and it’s not often reflected in entertainment as a Black woman. Growing up, my experiences with video games came from the views of Black women. So it was odd to me that many African American experiences simply weren’t shown in the media that is universally consumed. Many times the portrayals shown are either the negative stereotypes or ones that tend to pedestalize and make Black people seem supernatural. The middle ground of just being a normal person has been missing, and Mythic Quest brings it back in a very pleasing way.

Imani Hakim (Everybody Hates Chris) plays Dana, a QC video tester who loves that her job involves playing her favorite MMORPG, Mythic Quest. She’s normally seen in a dark room with her co-worker Rachel (Ashly Burch). Dana is a sweet, optimistic young woman whose growth follows a path from complacency to being motivated to make something more of her career.

It’s a story common to all women trying to find their place in male-dominated industries. Mythic Quest goes to great lengths to make sure the world isn’t color or gender blind to Dana, and that these labels inform her experience without defining it. Hakim mentions that Dana and her relationships were very bare bones when she initially read them, but an inclusive environment allowed her to be integral in fleshing out the character and storylines.

Hakim does a wonderful job of bringing balance to a character that not too many are familiar with. I had the chance to sit down with her and talk about Mythic Quest as well as what’s next for her creatively.

I just got done binging the entirety of Mythic Quest, and I love, love, loved it! I’m always interested in shows that have at least two Black women who aren’t related. Between you and Naomi Ekperigin (who plays long-suffering HR Manager Carol), I was very pleased. Dana is not just a side character; she has her own storyline. Can you tell us how you were cast and what were your first thoughts?

With Dana, I did the dance I usually do and auditioned for the role. I remember reading the first draft of the script, before it even became Mythic Quest, and getting butterflies in my stomach. I felt so connected to this character because I have identified as a Black girl nerd my entire life! My very first pilot script that I ever wrote was about a girl gamer and so I thought, “Oh my gosh, this is serendipitous, I have to be a part of this show!” Just looking at Mythic Quest, it’s an office comedy that highlights the world of gaming, which is the biggest industry, bigger than TV and film. I hadn’t seen any representation of the gaming industry quite yet on such a massive scale, and I hadn’t seen any representation of Black women in that space. So to me, I just felt connected to the project.

Growing up, all the gamer girls I knew were Black girls. And when it came to these archetypically nerdy mostly white things like Dungeons and Dragons, comic books, and anime, my lead in was always a Black friend. So I love the idea that it’s not a new take, but one that has since been rediscovered. What was your intro to nerd culture?

My intro into anime was through my Black girlfriend and just my group of Black friends who used to watch it. That was sort of my taste of the world. I love alternative music, I love anime, I’m into graphic novels and comic books. I’ve always gravitated to that style and life. And you’re right, it’s not something that’s new at all. It’s just undiscovered, people weren’t really talking about it, but it’s been around forever.

I interviewed the showrunner from Freeform’s Cruel Summer, Tia Napolitano, and one thing we spoke about was the idea that people of color and queer people, and other marginalized groups existed during the ’90s. But the media didn’t represent that. Once you got on set and saw the cast, did that seem important to you, having that kind of representation?

Yes, it was amazing! And I was also like, why isn’t there more of this? During one of our first costume fittings for the show, Jessie [Ennis], who plays Jo, said, “Hey, why don’t we all get dinner tonight?” So we all got dinner and gushed about how nervous we were and how we were all on the same page. We were stuck to each other like glue. I look at our relationship and our friendship, and it just brings me so much joy, but there’s also a sense of sadness that a lot of people don’t experience this in a work environment. Women in general, especially in our industry, are taught to be competitive with one another and to not support one another in this field. So I think what our show is doing is really important. We have a lot of diversity in our cast, but we also have four women leads and three of them are women of color and it’s all in this tech space. So we keep checking all these boxes. I give credit to Rob [McElhenney one of the showrunners/executive producers], David [Hornsby, another It’s Always Sunny in Philadelphia alum who executive produces], and Megan [Ganz, executive producer known for Modern Family but is also It’s Always Sunny producer alum] because they’ve cultivated such a safe and collaborative environment.

You’ve gotten into directing before. Are you looking to be behind the camera more and maybe be the one who is also creating these inclusive environments?

Absolutely! Rob McElhenny has been a really great mentor, and he’s given us a perspective of how it all starts at the top. Whoever that showrunner is, it kind of just trickles down. It’s like parenting in a way, you know? Your kids are going to pick up what you put down. With directing my first short film, I wasn’t on Mythic Quest yet, but I definitely learned a lot and it was very challenging. But now that I’m continuing to create and write — I’m actually working on another project right now and I hopefully plan to direct it — I have more tools in my toolbox and understand what it looks like to create a community on set, a tribe that’s inclusive by nature and a safe space, something that’s collaborative and warm. I hope I can provide that. We just need more people of color and women voices behind the camera. That perspective is so necessary.

Hakim has been working on the feature Dinner Party and will begin production on Season 3 of Mythic Quest. While she was unable to give any details about the future of Dana/Rachel, she does say we’ll be able to see Dana finally getting to study what she’d been talking about all during Season 2. Exciting things lay ahead.

Mythic Quest Seasons 1 and 2 are available for streaming in their entirety on Apple TV+.