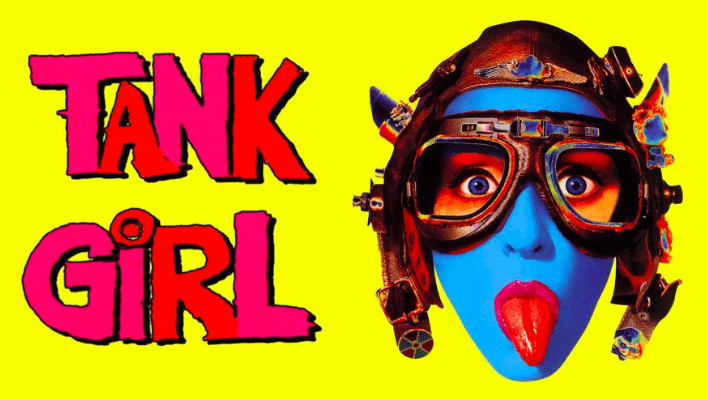 The year is 2033 and Earth has been ravaged by a comet that caused a massive drought across the planet. No rain has fallen in 11 years. Water is the new currency, and the elites in power make sure they control this resource fully as regular folks struggle for basic survival. Rachel Talalay’s 1995 adaptation of Adam Martin and Jamie Hewlett’s Tank Girl comic follows the titular agent of chaos Rebecca, aka Tank Girl (Lori Petty), after her outlaw community is raided for siphoning water without authorization. Rebecca’s boyfriend is killed and his daughter sex trafficked to a bordello that caters to the rich, while Rebecca is taken to the head of Water & Power, Keslee (Malcolm McDowell), to pay for her “crime” of providing water to her people.

Told in a hybrid narrative style that includes long strings of animation inspired by the comic as well as chaotic fast-cuts that mirror the protagonist’s eclectic being, Tank Girl is a wild and often-hilarious romp into what is now the near future: The comet that hit the Earth and caused global devastation and catastrophe in the movie version of Tank Girl lands in 2022, an aspect of the movie that probably won’t even phase people to hear as 2020 continues to be a complete and total trash fire of a year. 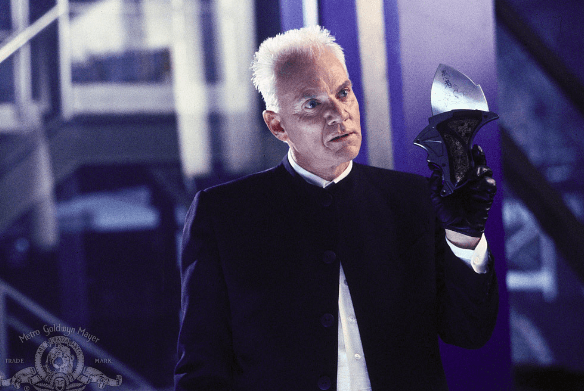 Not to mention, the world of Tank Girl is ruled by a fascist dictator with funny hair who hoards resources for only the wealthy. Sound familiar? Played with maniacal glee by Malcolm McDowell, Keslee is a sadistic psychopath who tortures anyone who disagrees with him or tells him something he doesn’t want to hear. He also has a stabby tool that extracts all the water from a human being’s body and purifies it for drinking. Keslee drains and drinks several people over the course of the movie, which ultimately becomes a metaphor for the powerful literally feeding on the bodies of their subjects. Sound scary familiar yet?

Because the Keslee character isn’t in the original comics, screenwriter Tedi Sarafian must have had a crystal ball when she crafted this monster. The parallels to the current leader of the American government are uncanny and so creepy. The biggest difference is that Keslee eventually turns into a holographic humanoid creature by the end and is ultimately destroyed by Tank Girl. She goes on to democratize water distribution for everyone, along with her crew that includes Jet Girl (an almost unrecognizable Naomi Watts speaking in her original accent) and the kangaroo-human hybrids the Rippers.

In the 25 years since Tank Girl’s release, water wars across the world have begun in earnest as climate change has provoked a variety of unusual weather events of extreme severity that have indeed resulted in widespread droughts across the planet. Migration in areas of Africa, Asia, and the Middle East have been provoked by water shortages and unequal distribution. In America, Indigenous activists and allies have been attempting to block oil pipelines that put huge American water sources at enormous risk for contamination. All the while, we have evil corporations like Nestlé that are trying to buy up springs with potable drinking water for resale and have even gone so far to try and make the case that access to water isn’t actually a human right. I guess they forgot that human bodies are majority water, and without water we die terribly in just a matter of days. Or, like Kesslee, they simply don’t care about human devastation in the wake of corporate greed.

But while Tank Girl has indeed predicted water wars and extreme shortages that are putting huge chunks of human society at risk, there is a glaring absence in the movie that becomes rather terrifying once you notice it. Tank Girl presents a future without people of color, and in particular Indigenous Australians. The only people of color on screen are James Hong (Dr. Chetsai), and as Rippers we have Ice-T (T-Saint) and Reg E. Cathey (DeeTee). Unfortunately, the Ripper characters are in heavy kangaroo prosthetics, so they aren’t at all representative of Black folks in the future. Tank Girl does, though, include aspects of the film score inspired by the didgeridoo, which only adds to the blanket Indigenous erasure on screen.

It gets worse when you learn that the movie was actually filmed in New Mexico and Arizona, two American states with huge Indigenous populations that have been struggling for their own water rights for decades and losing thanks to real-life Keslees. The Navajo Nation is one of the hugest COVID19 hotspots at the moment, and one of the reasons is because a huge chunk of the Diné population who live on reservations do not have access to running or potable water. They have also been denied the federal funds and assistance to curb the spread of the virus; a genocide by inaction openly perpetrated by the current political regime. All of this makes it extra problematic that Tank Girl adorns herself in a fake headdress and war paint in this context; it is cartoonish cultural appropriation of a now-disappeared people within the movie. It makes me scared that in a matter of years, we might actually be living in a version of Tank Girl in real life that is devoid of water and Indigenous peoples. The thought is terrifying.

Tank Girl’s apocalypse aesthetic and girl power may have withstood the test of time, and Rebecca/Tank Girl herself embodies so many positive qualities. She’s loyal, proudly pansexual, has a fierce sense of integrity, and kicks butt whenever she needs to (and also sometimes when she doesn’t). Taken on her own, she’s a messy role model for a post-apocalyptic world as well as our current times that can be far more accepting in particular of her open sexuality than they were back in 1995.

Watching Jet’s huge arc from simpering victim to a woman with agency and power over the course of the movie is fantastic. It’s weirdly awesome how Ice-T’s Ripper character, a self-confessed former cop, foreshadows his long run as Det. Tutuola on Law and Order: Special Victims Unit. The movie’s soundtrack still rocks, and Ice-T’s theme song “(She Walks Softly But She Carries A) Big Gun” is as relevant to feminist badasses as ever.

Unfortunately, the fact that in the 25 years since Tank Girl came out we as human society have only moved closer and closer to that fictional future is legitimately horrifying. The erasure of people of color that often comes with environmental devastation kicks Tank Girl into horror movie territory 25 years after its release. Potentially even scariest, I wonder in real life if we even have time now to turn all of these possible eventualities around.

Tank Girl may be a fun, technicolor feast for the eyes and ears, but the future it presents is not one in which we actually want to live even as every day we move nearer and nearer to it.