Our favorite Awkward Black Girl Issa Rae (and co.) is returning for Season 2 of her hit HBO show, Insecure, and we’re beyond excited. But what’s even more exciting was FlavorPill hosting an amazing “Hella Brunchin’” activation to kick off the momentous occasion where guests could come dine on some grub, have a few cocktails, bop to some music, get their nails done, and take in the Season 2 premiere!

Being the dedicated Insecure fans we are, Black Girl Nerds could not pass up the opportunity to attend the event and we’ve even got a play-by-play on the ‘lituation.’

Housed at the House of Yes in Bushwick, Brooklyn NY, the event was “hella live” as the line to get in went to the end of the block, and maybe even around the corner. Everyone was trying to get in. 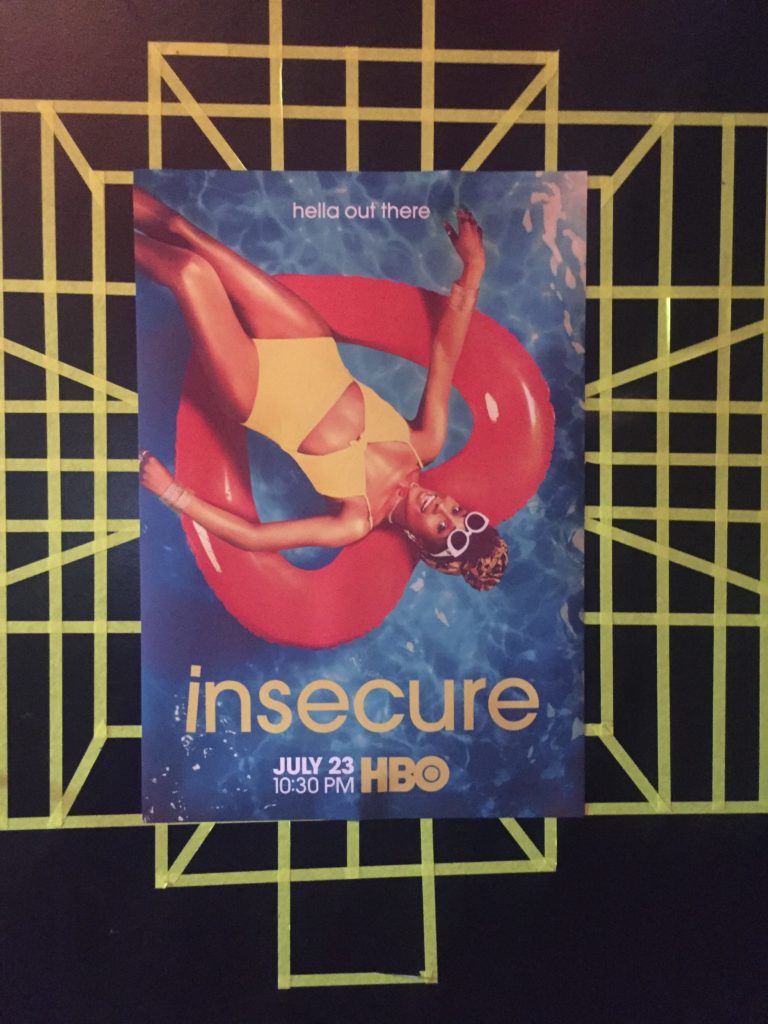 Once inside, guests were immediately graced with promotional artwork of Issa floating in her heart-shaped inflatable pool floats. DJ Kitty Cash was spinning bops at the DJ booth, which put us in a good mood as we made our way over to the bar where attendees were given a choice of several cocktails, all inspired by this Season 2’s “hella” tagline: 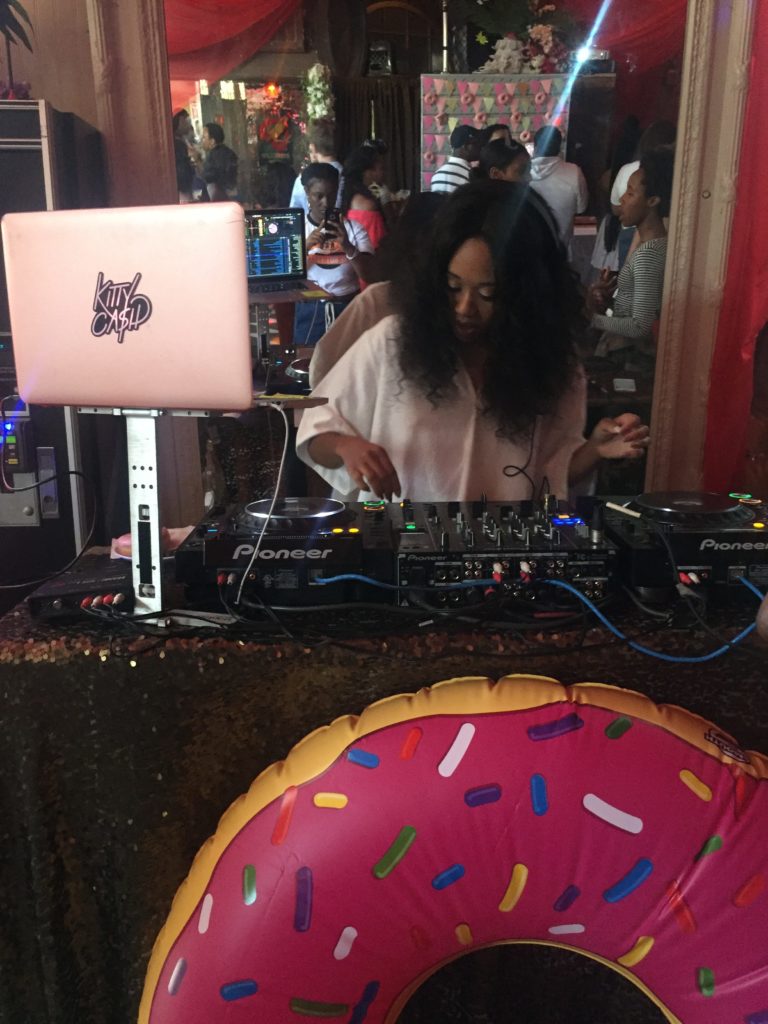 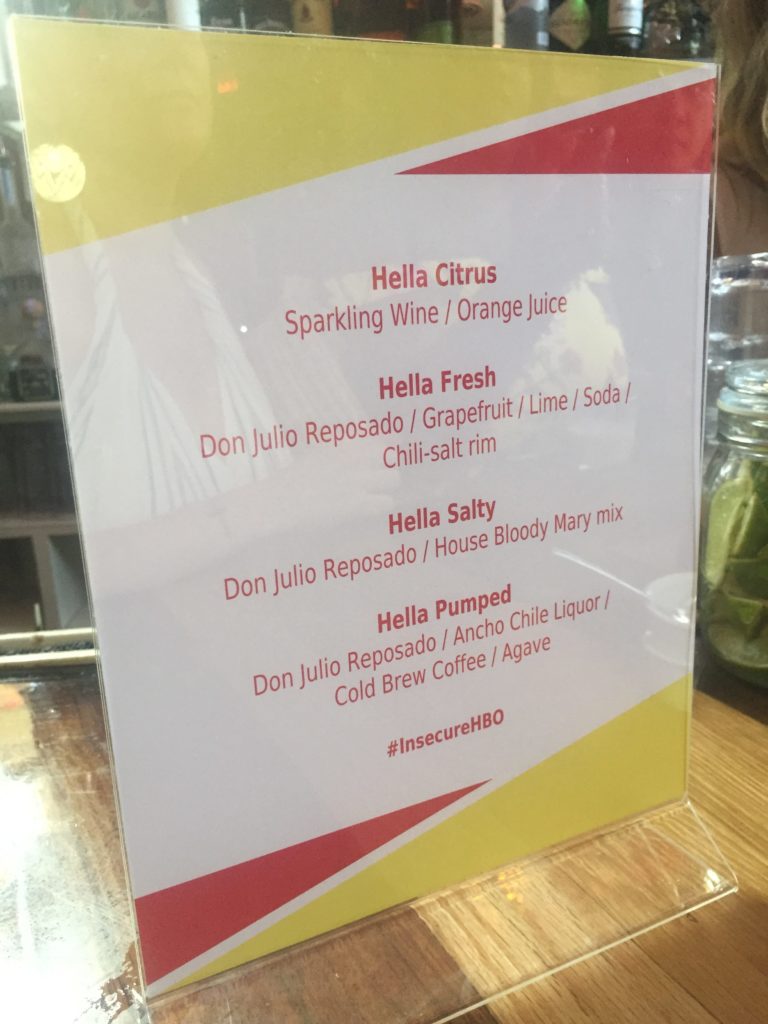 Armed with two drink cards, we partook of the “Hella Fresh” which was hella delicious.

In addition to some cocktails, there was also a “Doughnut Kill My Vibe” doughnut display with accompanying Baileys Irish cream mixed drinks for guests to nosh on while mingling through the crowd. 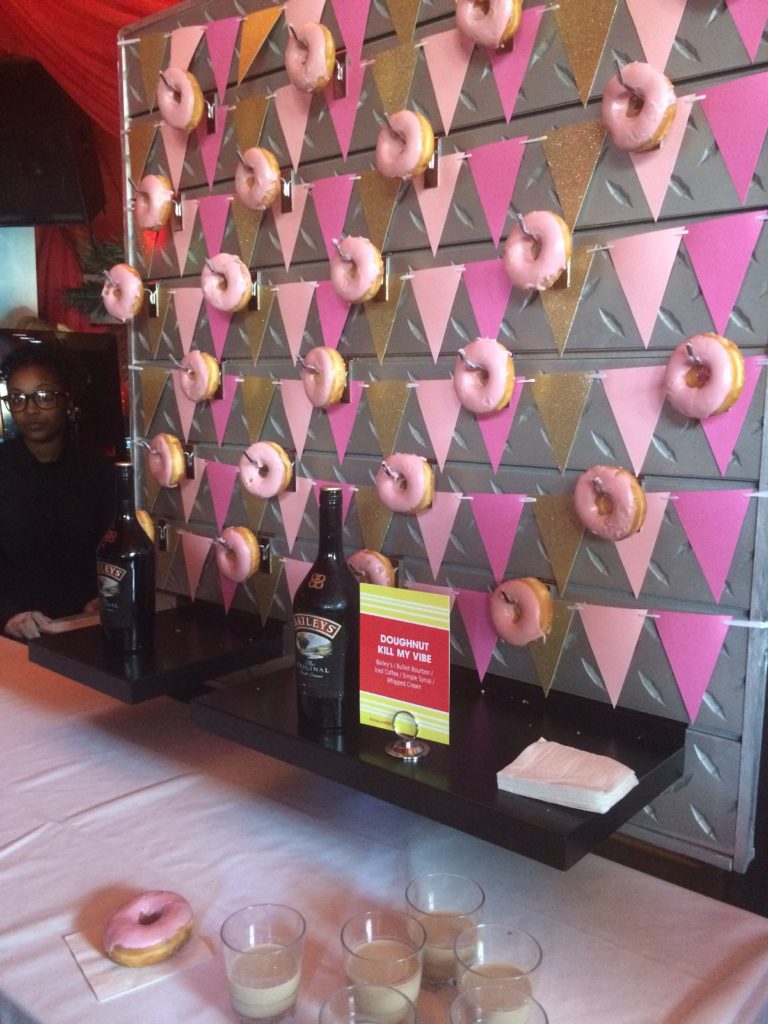 In addition to eating and sipping, guests were encouraged to have a little more fun at the photo booth which doubled as a GIF maker with a bevy of props.

Repping @blackgirlnerds and covering the @flavorpill_nyc #insecurehbo Brunch with @alja0214 . Yes I’m wearing a “We Got Y’all” shirt from the show, thanks to the @hbo team #hellabrunchin

Across from the photo booth was a manicure station (with an unfortunate wait time of 1 hour and 45 min) with about six nail technicians hard at work giving partygoers one of six trendy designs on their fingertips. 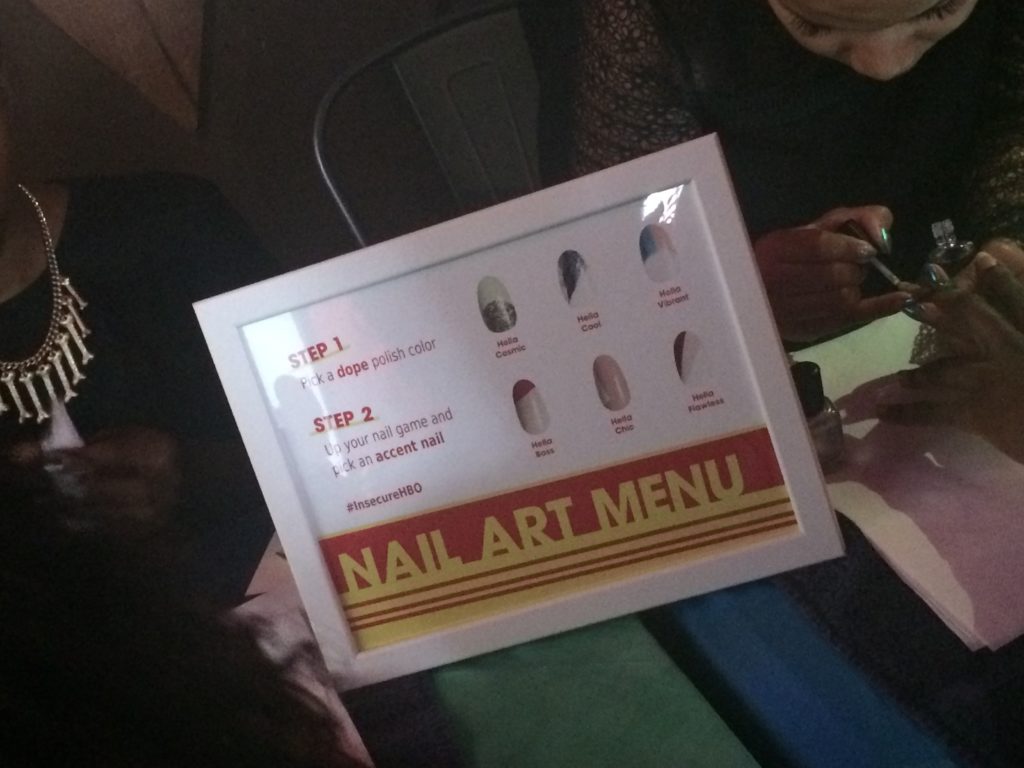 Sadly, we did not get any of the hella cute nail designs done on our hands (which were desperately seeking manicures) but we did get to dine on some of the micro-grub offered in the stage room where the screening happened later.

On the bar, attendees (who occasionally jumped ahead of those of us who were on the line) were given the choice of bite-sized treats like Rice Krispy cups with yogurt and blueberries, a mini oatmeal creme brulee, french toast bites, frittata squares, a shot glass parfait, and a few other eats. 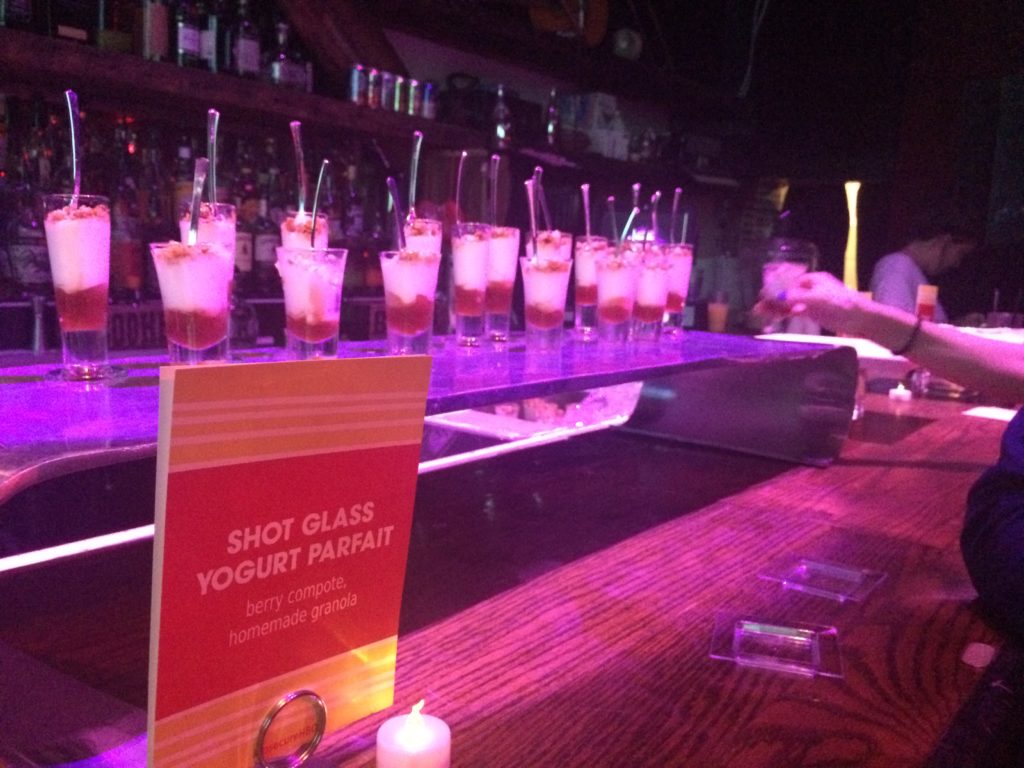 Scattered on tables were press-on tattoos, all following the “hella” theme as well. 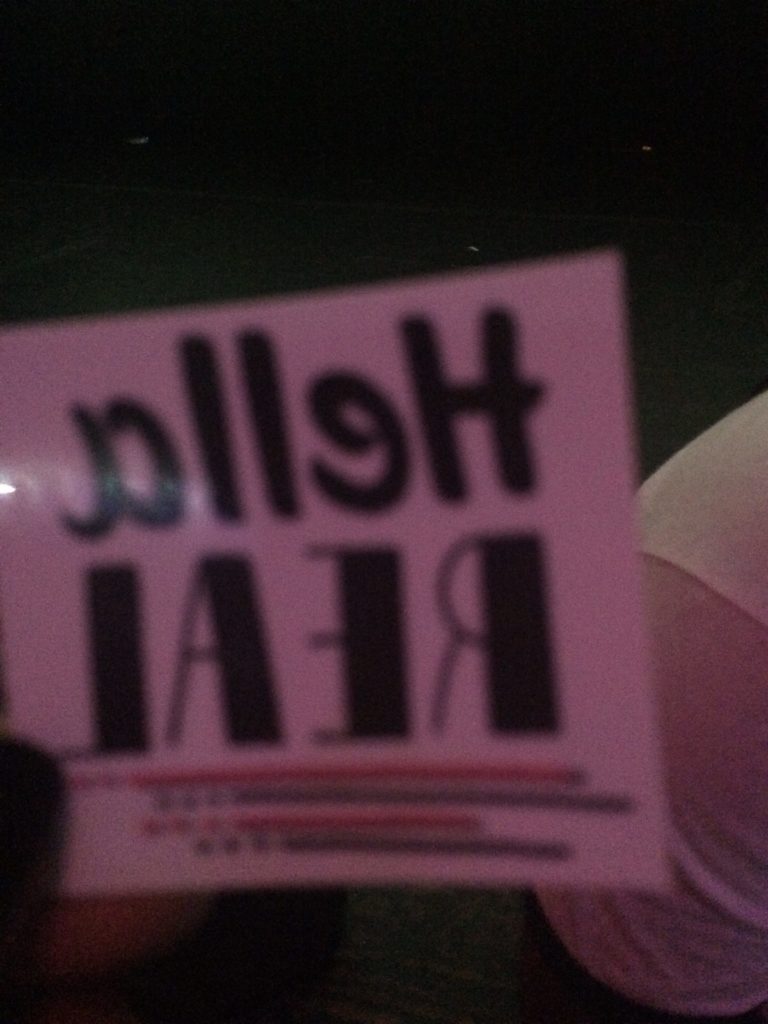 But as lovely as the snacks, drinks, and music (which inspired a couple electric slides in the bar area), were, fans of the show were probably the most enthused about the Insecure Season 2 premiere screening.

DJ Kitty Cash hopped on stage to usher everyone into the main stage room and grab a spot to watch the first episode, preceded by a quick Season 1 recap.

Not one to spoil anything for viewers (though we totally could), we won’t tell you what happened — you’ve just got to watch on Sunday, June 23 at 10:30 PM — but we did get a few grabs here and there:

By the end of the 20something minutes (because you know HBO can’t ever give us a full 30-minute episode), everyone was either clapping, cheering, saying “uh-uhhh,” “nahhh,” or “yassss”… basically, a typical reaction to watching Insecure. 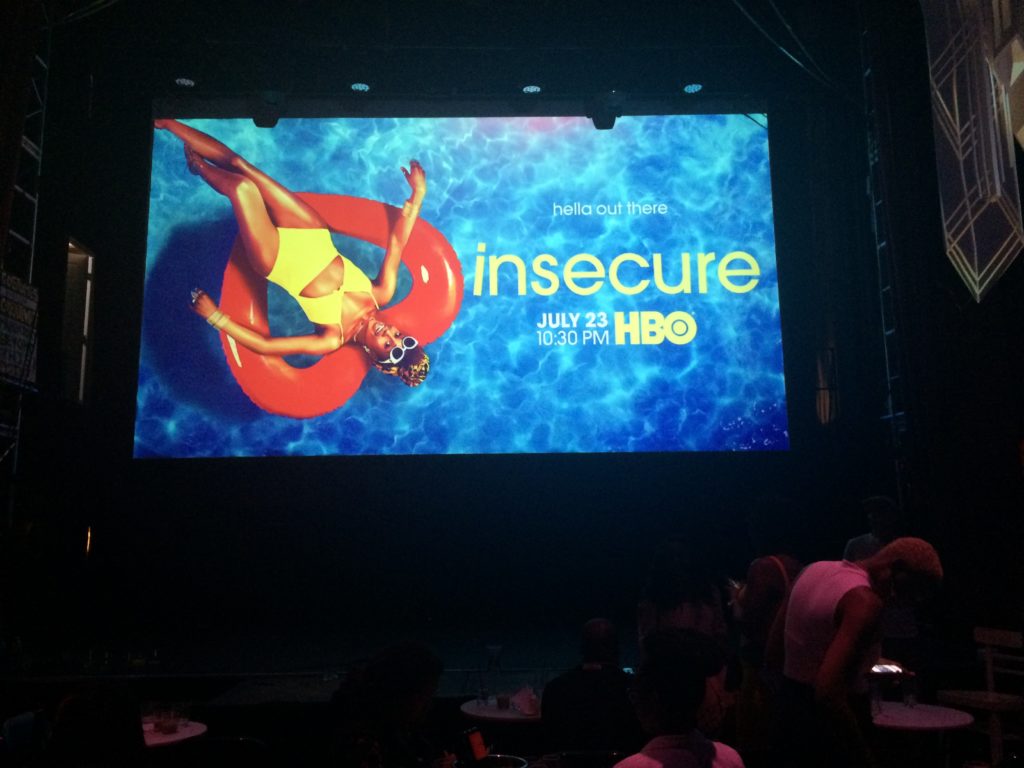 Afterward, the drinks were once again free flowing and the music was blasting, allowing for patrons to wander around House of Yes to pose with props, pick up their photos from the photo booth, get their last few bites of food before it was time to wrap things up.

All in all, it was an amazing event with much love and appreciation to HBO and FlavorPill for throwing it all together. Fans from all over the borough (and maybe even the city?) got the chance to enjoy in this shindig and it definitely got us pumped and ready for the Insecure Season 2 premiere. It’s going to be hella lit, y’all!

If you’d like to check out more shenanigans from the Black Girl Nerds crew at FlavorPill’s Hella Brunchin’, check us out on Instagram here, here, and here.