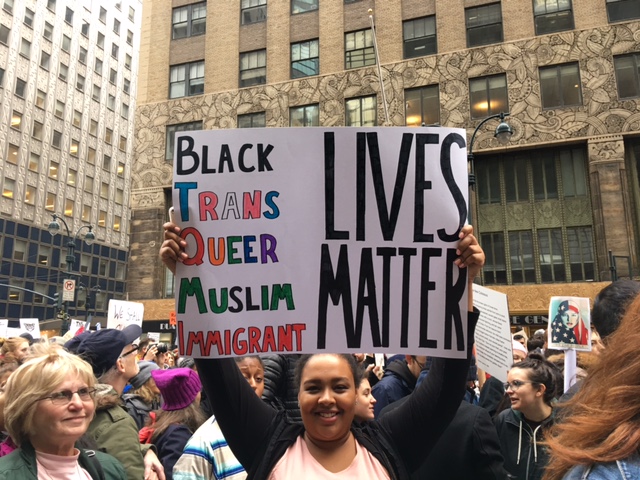 The Trump administration has got people acting so out of pocket. As the autonomy of women is stripped away by this white, male, republican regime, the talk of solidarity echoes throughout society. Many of these executive orders affect women directly, so feminists are rallying together to send a word to the President and his administration that women are united — or are they? The Women’s March that took place after Trump’s January 20 inauguration was supposed to be the catalyst for change as we all came together for a common cause.

Unfortunately, there was a big problem with this: the lack of intersectionality in the mainstream (white) feminist movement. The media highlighted Scarlett Johannson, Madonna, and Ashley Judd as they took the stage in Washington D.C. but neglected to mention those speakers who are connected to marginalized communities.

But that’s not all.

At Sundance, actress, and comedian Jessica Williams experienced the right hand of white feminism and privilege. Her words were dismissed and her character belittled because two individuals couldn’t relate. There were a few people who tried to stick up for Jessica, but do you know what the majority of folks at the table did? NOTHING.

If you want real unity, all this shit has got to stop. Lex from Sublime Zoo and I are about to let you know how you can be a real ally in this feminist movement. You won’t get help from women of color without it. Here are the dos and don’ts of intersectional feminism:

DON’T: Get Trapped By White Fragility. It’s Not Cute.

Confused about what white fragility means? Here’s a handy-dandy definition from Robin DiAngelo:

White Fragility is a state in which even a minimum amount of stress becomes intolerable, triggering a range of defensive moves. This includes the outward display of emotions such as anger, fear, and guilt, and behaviors such as argumentation, silence, and leaving the stress-inducing situation.

Every time you refused to confront your racist aunt Susan and uncle Stan at Thanksgiving, you miss out on an opportunity to check those with privilege.  Think of every time you got into your feelings when a person of color called you out for doing something foul and racist (best recent example? Margaret Cho vs. Tilda Swinton). Think of every time someone called your ally status into question. Think of every time you dismiss #BlackLivesMatter, or ignore police brutality discussions… but have the nerve to show up to the Women’s March to talk chant “we’re all one.” Seriously, how dare you.

Your fragility is an excuse to center yourself in a conversation that doesn’t involve you. You begin with tone policing, which is the ultimate derailing tactic. It’s when an individual (usually more privileged than the person they’re locked in discussion with) criticizes the opposing speaker’s “inability” to separate their warranted emotions from their arguments. It is the belief people need to distance themselves from their emotions and personal experiences to be taken seriously. Time to cease this mess.

DO: Shut up and LISTEN

It’s not the time for you to interject when women of color are explaining their struggles and experiences to you — it is time to internalize! Think about it. With Donald Trump’s executive orders attacking those from marginalized communities, do you think they are in the mood to hear about your opinion on their experience? Before you think to open your mouth and make the conversation about you, ask yourself self some questions: will what I have to say be helpful or harmful? Does what I have to say apply to this conversation? Do I know enough information to speak? If all the answers to this question are “no,” then please shut up and listen. By keeping quiet, you will be surprised at what you learn. If you want to know more, ask. Don’t be a douche bag by assuming you know about situations you can’t identify with. No one cares about your opinion. You hear that, Salma Hayek? NO ONE CARES! 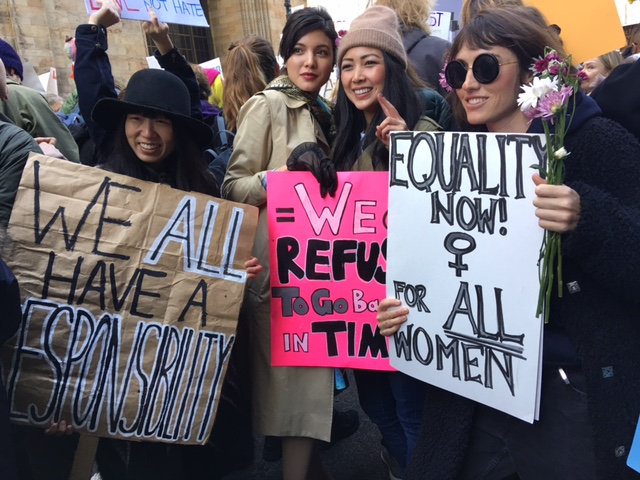 DON’T: Rely on MLK Rhetoric to get your point across.

Martin Luther King Jr. is not your patron saint or Magical Negro of love and positivity. His words are not to be used to patronize the oppressed. He did not die so that you can take his words and twist them around to use them when you want to be right. He was a radical. He wore and suit and tie, he was respectable, and in the end, he saw “allies” for who they really were. For that, King was cut down in his prime by those who feared him. You know, white people.

The Negro’s great stumbling block in the stride toward freedom is not the White Citizen’s Council-er or the Ku Klux Klanner, but the white moderate who is more devoted to “order” than to justice; who prefers a negative peace which is the absence of tension to a positive peace which is the presence of justice; who constantly says “I agree with you in the goal you seek, but I can’t agree with your methods of direct action;” who paternalistically feels he can set the timetable for another man’s freedom; who lives by the myth of time and who constantly advises the Negro to wait until a “more convenient season.”

Mind blowing, isn’t it? He didn’t think we were all one after all. People like to bring up this so-called “nonviolent” movement, but conveniently forget his defense of violence when it came to the oppressed.

He also had plenty to say about fake white allies (liberals and moderates ) and their emphasis on “peace over everything” — which he once referred to as “negative” peace —and the way in which said allies became obstacles in the pursuit of freedom, and furthermore, justice.

DO: Acknowledge our struggles are not the same

Sure, we are both women, but does that mean our experiences are the same? Not when Latin women make 56 cents on the white male dollar, while you make 76 cents. Not when Black women can’t shop in peace, while you get to enjoy your shopping experience. Women of color encounter a different set of struggles than any white feminist. They stand at the intersection of sex and race which presents two strikes. There is a privilege that comes with being born white in America. You’ll never understand what it’s like to be black, Latin or indigenous in America, but you can validate that there is a problem. Maybe acknowledging these differences between us will also help you gain a small bit of trust within WoC communities. Maybe.

DON’T: Try to sell us that bipartisanship/give them a chance s**t

This is an easy one. You see, fauxgressives will encounter many “progressives” who suddenly are ready to compromise with Trump like they speak on behalf of everyone.Many of your favorites progressives (Zoe Saldana, Scarlett Johannson,  Susan Sarandon, Chrisette Michelle, Mary Mary and the list will grow) will go back on their word. Instead of resisting like they told you they would, they will do an about-face, telling you that they intend to “reach across the aisle” and make amends. This benefits no one but yourself. It’s selfish, and it’s lazy.

Do not replicate these mistakes. You can’t convince people to reason with individuals who wish to violate your body and your rights. Some of you may have the stench of privilege about you to be able to give into all that, but many of us don’t have an option.  You’re either with us or against us. That’s it.

DO: Support and Speak Up

Your safety pins are not enough. Your empty promises of solidarity fall on deaf ears. Why? Because your actions are contrary to what you say. How can you say you believe in solidarity when you stand silent as WoC are brutalized by racism (verbal or systemic)? THIS IS THE TIME TO SPEAK UP! Why must we always support the bigger movement for the betterment of all when it isn’t reciprocal? Women of color are tired of putting in the work while others reap the benefits. They are sick of the disregard and the disrespect from your friends and family while you hang your head low because you’re too scared to check your peers. Until you start speaking up and showing us you mean business, kill your holier than thou attitude. You ain’t fooling nobody.

We’re not going to continue to repeat ourselves on this. Get it together or get left behind. Trust and believe, women of color got this thing on lock. Can you say the same for yourself?