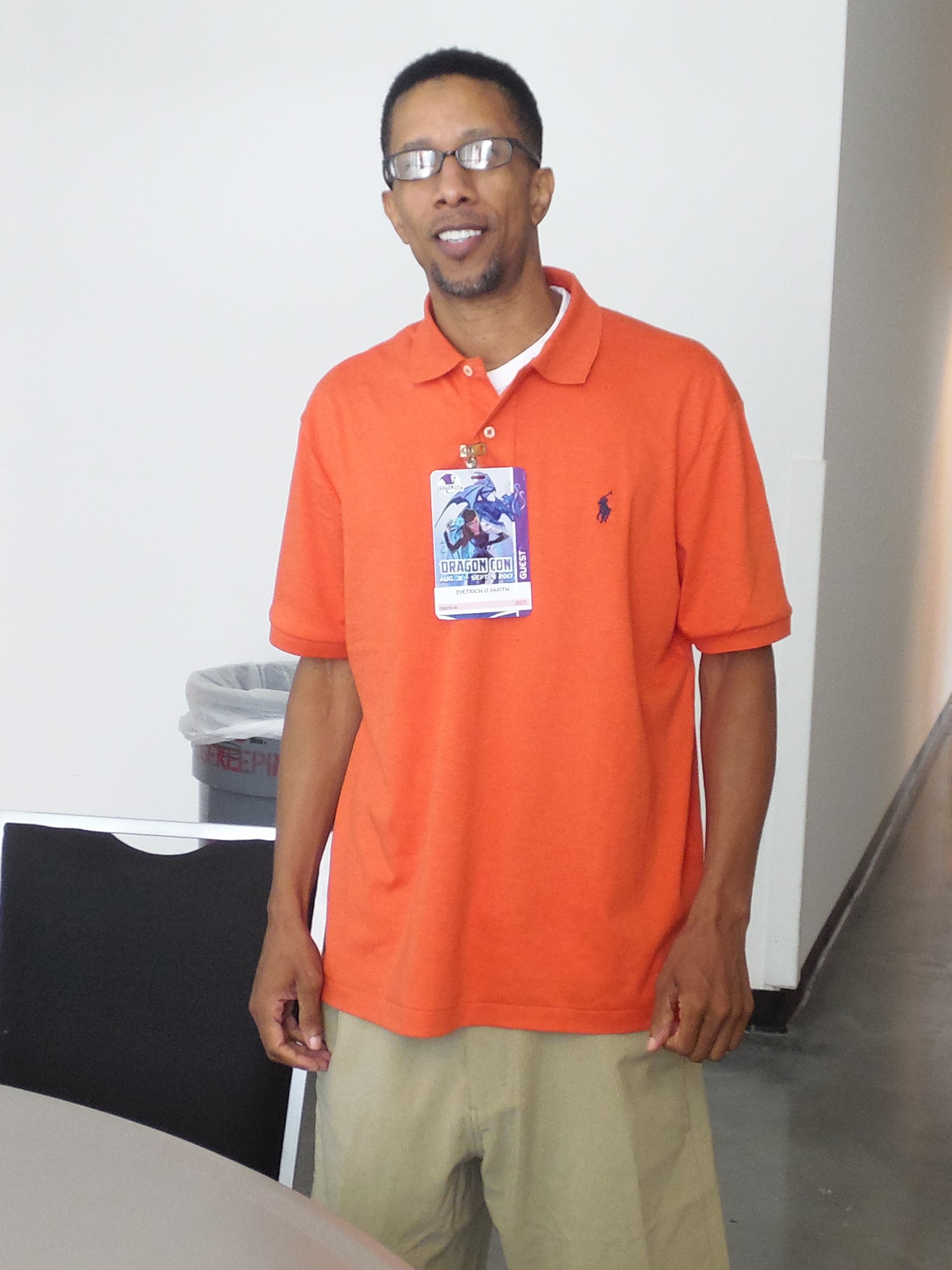 DragonCon 2017 featured all the cosplay, gaming, and panels that a convention lover could want. The Labor Day weekend extravaganza brought out over 80,000 people to downtown Atlanta to celebrate their favorite fandoms and areas of interest. The convention’s size and reputation for being a place to party means it does everything on an extravagant scale – including its infamous Comic and Pop Artist Alley. DragonCon takes over an entire convention space and dedicates a floor to almost 150 of the world’s most innovative and talented artists/writers who make our favorite comics, animation, toys, and much more come to life.

This year’s guest list included artist Dietrich O. Smith, an Alabama bred artist who has worked with various publishers including Marvel, DC, Dynamite, Image, and many more. I had the opportunity to sit down with him and dive into his background, musical inspirations, industry challenges, and his creative process.

How did you become an artist?

Dietrich: I think it was my great-grandmother reading the little Sunday morning comic strips to me as a child. Lois and Clark, stuff like that. I started tracing Snoopy and Charlie Brown…

Dietrich: Haha yeah! And then it graduated to watching Captain Caveman and Saturday morning cartoons. And then it went to comic books. I loved Teen Titans, Cyborg, Changeling, and Nightwing. 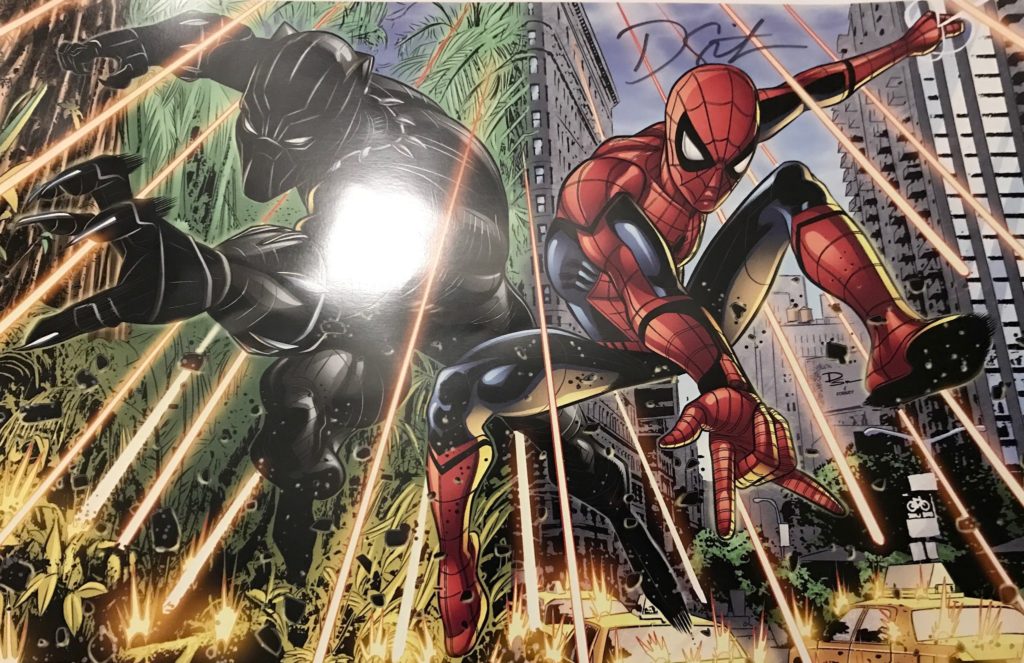 When did you get to the point that you knew being an artist would be your career?

Dietrich: I was on and off as a reader from junior high and dropped off in early high school. I got back into comics later in high school when the Image boom came. My sophomore year in college I was studying Mechanical Engineering and there was a huge Image talent search in California. My homeboy who went to Alabama A&M and he convinced a group of us to go there and take a chance. I was in one of my exams drawing Cable and Deadpool instead of doing my math problems. So I saved up that summer and took a risk by moving out to California and that’s how I got in the industry. I went to a few conventions and met (Image Comics pioneer) Rob Liefeld and a few of his assistants. It then became that persistence of showing up at their studio and being like “HEY!”

TG: So it really was just taking the chance, getting out there, persistence, and doing the work

Dietrich: Yep! So I was in Cali for about 6-7 months working at clothing stores here and there. I was seeing the artists and bothering them all the time.

Now, do you find that artists come up to you and ask you to put them on?

Dietrich: Oh yeah. When they do, I tell them to make sure they are using social media. Because we didn’t have Instagram and Facebook 20 years ago when I broke in the industry. I was faxing things back then! So I push social media and I try to give them editor’s email addresses because I know editors who are looking for work besides mine. I’m not always the right guy for the job!

You’ve had the opportunity to illustrate comics for several publishers. What do you feel your barriers of entry were to get into those mediums and do you think that race played a factor in your challenges?

Dietrich: I think my persistence, constantly bugging editors, trying to develop my style to what I thought was commercial enough to get me employed, and becoming friendly with other artists and other editors led to my success. I think they felt sorry for me after a while! They were like okay just hire this dude. (laughs)

You said you switched up your style to make it more streamlined and commercial. What exactly did that mean for you? Do you feel like you compromised your individuality?

Dietrich: I think I did [compromise my individuality]. I tried to become too much of a commercial machine. Some people look back at my earlier work from 20 or 30 years ago and said “man you had that animated energy!” So I think I did lose some of my originality. I was looking at Brian Stelfreeze and trying to adapt some of those styles into what I had going on. But, I think it helped me because commercial sells. I think what I had before wasn’t great, to begin with. So I think adapting and sharpening my artist skills got me more opportunities and kept me employed.

So, right now you are illustrating Victor Lavalle’s horror comic Destroyer. What is it like working with him and how do you collaborate with each other as you create the panels?

Dietrich: I don’t get a chance to have too much contact with the writers because there are so many of them on different schedules. But working with Victor is great. He pretty much lays out everything and gives me free reign. What he gives me in the script is straightforward. I might want to combine a panel here and there but mostly what he lays out for me is good to go. The characters are set out and designed, but the location and settings give me some play room. In one issue, I had to recreate the Medgar Evers (murder) scene. That was stressful! The scene he had me do was Medgar Evers coming to his door after he had been shot and it was very touchy stuff. It’s a hard subject and I didn’t want to offend anyone. I was like “Ohhh Victor you gave me a tough scene to draw!”

But working with David Walker on Shaft was interesting too. He gave me some Klux Klux Klan and screaming crackers and it was a thin line to walk. 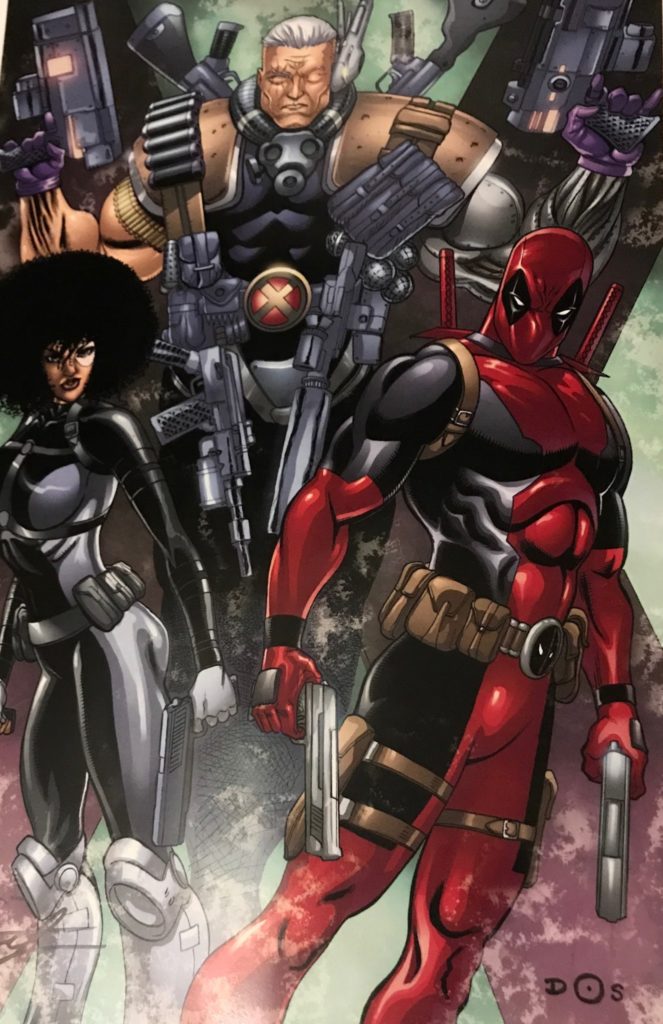 TG: It’s all about trying to get that balance between staying true to what the writers want you to do and making sure that people can get the most of out the panels with stumbling too far into certain territories.

Dietrich: Yeah. Like I said I don’t want to push past the rules allowed in comics and make it an X-rated or R-rated comic. I need to get and keep the PG-13 readers.

When you are creating art, what inspires you? What kind of music do you listen to and does the current social climate inspire your work?

Dietrich: I try to stay away from social media and politics because it starts to depress you and make you lose focus. But I love Pandora. Stevie Wonder, D’Angelo, Erykah Badu, and Jill Scott. Gimme some neo-soul and that gives me a different mindset.

TG: I understand the good vibes from their music! It puts you in the right headspace.

TG: Dietrich, thank you so much for your time!

Dietrich: No problem! Thank you for making me feel important!

Dietrich Smith was not only a great interviewee, but a gracious artist overall! He hooked me up with a few of his excellent prints and capped them off with his signature! For more information about Dietrich, catch him on Twitter and check out Destroyer.

Interviewed and written by: Tai Gooden