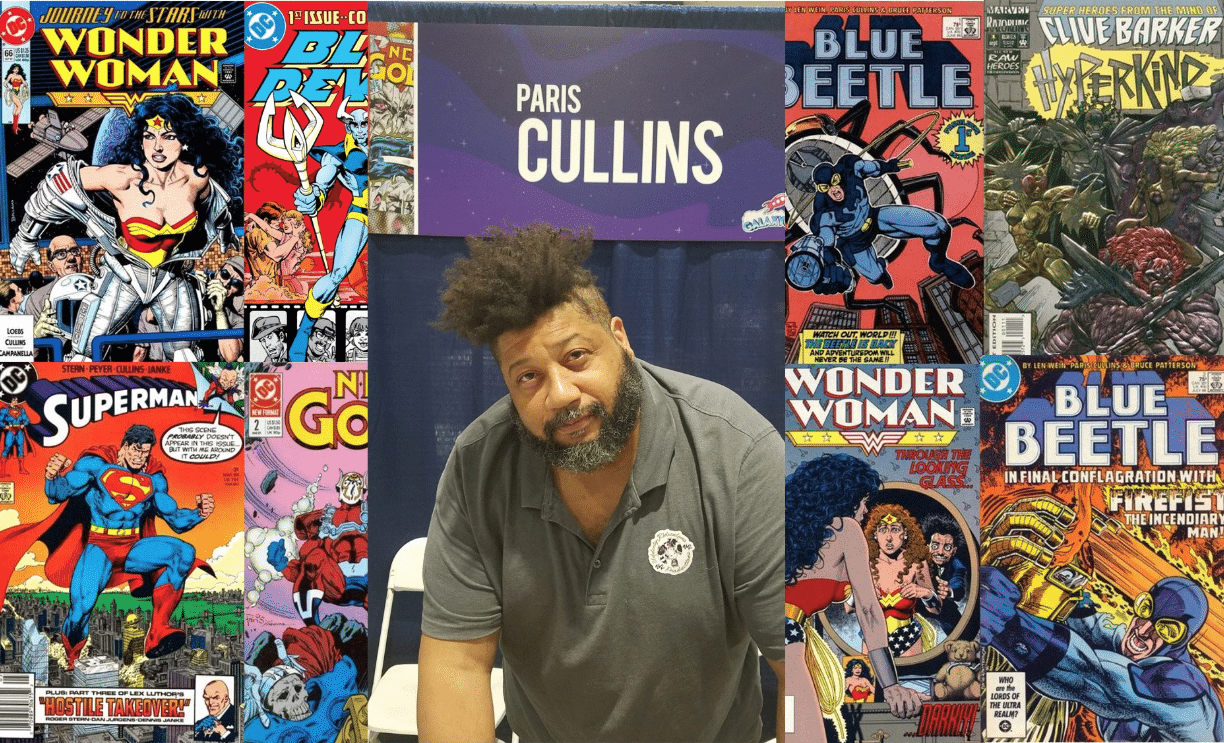 Whether it is the folks you meet standing in line to enter in the morning, to the hungry folks in line for a twelve dollar personal pan pizza, or the folks standing on the hard concrete waiting for a photo opportunity, one of the joys of comic conventions is the people that you meet.

Over the last few years, I have been fortunate to meet folks with such excellent personality, that your whole convention experience is informed by that interaction.   This happened last year when I ran into Tony Isabella, the creator of Black Lightning and Ken Lashley, comic artist extraordinaire.   So there I was in artists’ alley at Galaxycon in Richmond, Virginia and I am summoned over by an artist, with a drawing of a bovine.  Not unusual you say?  Normally no, but fortunately for me, I met Paris Cullins.  Cullins is an artist and writer, best known for co-creating the character Blue Devil.  His work, however, spans decades and dots through some of the best (i.e. Wonder Woman, Superman, New Gods) and for me the strangest (Clive Barker’s Hyperkind among others).  BGN sat down for a moment with Paris Cullins.

You’ve been in the industry since the early 80s, I think it is.

’78, excellent. What is this first superhero book that you worked on?

Superhero? Actually, the first thing I worked on was horror stories for DC Comics, House of Mystery and stuff like that. We graduated, so to speak, for backup of superheroes. So I think the first superhero book I did was Green Lantern Corps.

You’re one of the creators of Blue Devil. How did that character come about?

With the resurgence of the Justice League, Blue Beetle has been placed up front. Do you think that the Ted Kord Blue Beetle may make an appearance?

He’s making an appearance in the movies. There’s going to be a movie called The Blue and the Gold. Ted Kord Blue Beetle’s going to be in that. I think, because of the return of a DC’s, not daily, but they’re weekly animations versus the specials that go straight to video, if I understand correctly, something’s going to happen with that.

I think that though they got rid of Ted Kord in one way, he’s made a greater impact by being…what’s the word for it? A perennial of DC’s.

You’ve been in the industry for almost 40 years. What do you account for your longevity?

I’m more interested in working than being number one. Number one actually kind of comes to all of us at some given moment. Somewhere you do your job and somebody’s going to love you because they wouldn’t have hired you otherwise.  I worked for Nintendo, I worked for Atari, I work for Larami toys. I worked for Larami toys before I worked for DC comics. 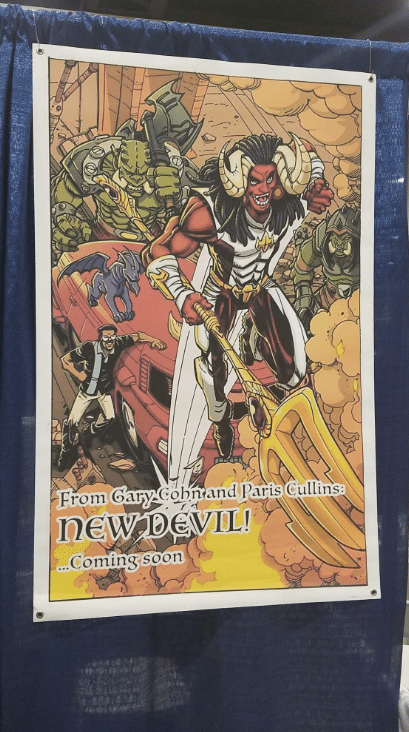 You have a good working relationship with Gary Cohn. What is your next project?

We have several next projects, one of the main ones is called the New Devil. The New Devil is all the things that we liked about the Blue Devil, which was, it was energetic, it was kinetic, it was fun. Mixed scenarios, mixed ideas about what it’s about. The plot of the New Devil is a character who got stuck in a video game in his avatar and the video game itself is wrapped around New York. So he’s got to stop this game for going on, but he’s loving the game so much he can’t face the fact, he really does have to cut it off and nobody’s going to be able to…

It’s going to be published by whom?

The company’s called Red Anvil. We’re going to go in every direction that that’s possible.

Do you have a Kickstarter or something where people could go find it?

We’re going to start a Kickstarter. We’re not done yet. We want all the books before we print one…it will be out in March.

Second is the one and only Bodacious Bovine and the creator of it is a member of the Richmond population. He’s a farmer, an agriculturalist.

He says, “Do you ever do anything like a trade?” And I don’t know why we both got it…and I told him yes. We started talking …and he says to me, “Well, I have this idea about cows.” And I want this picture of…as a matter of fact, I want to do a calendar about cows and I went, to myself, “Yeah, I always thought cows were sexy.”

So Bodacious Bovines, the basis of it is what? What’s the story?

It’s a farmer who likes this cow a little too much. It’s a cow that likes the farmer a little too much and the wife who’s kind of upset about the whole thing. Doesn’t find this whole situation suspicious. It goes from there because of tragic cow enemies, like the cow mafia, the cattle mafia, which does exist.  They’re called The Intolerant, but what they are, are lactose intolerant and just lots of crazy things. Real cow girlfriends, which are bulls, and all different kinds of cows and other animals make it. We even have a set of good guys called Guardians of the Pasture and just a whole bunch of things. But the main feature is this one cow. 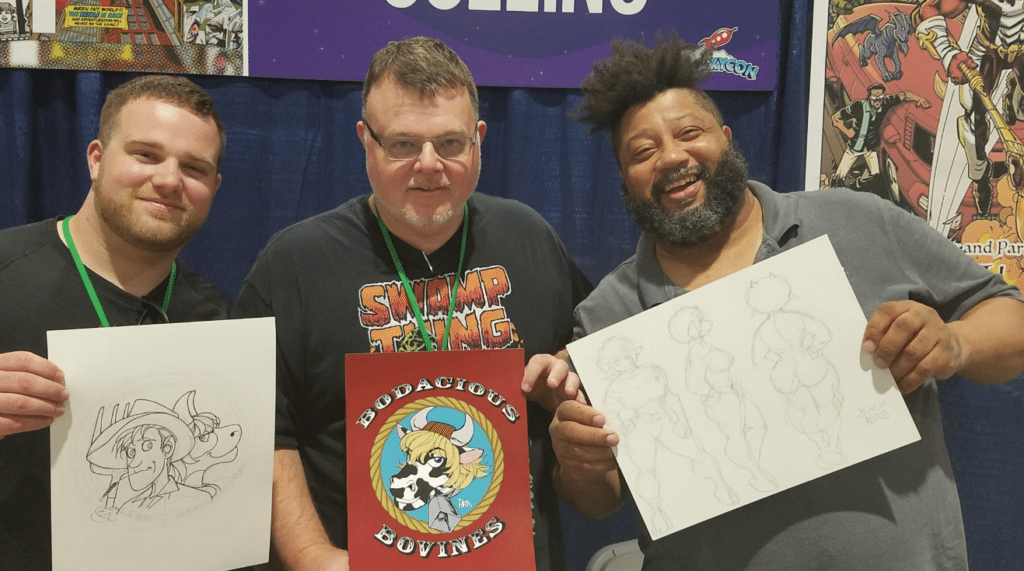 Actually, it is PG-13, closer to Family Guy, in terms of humor and stuff like that. But it goes right about there. There’s no cussing. We’ll say cow patties and we’ll say words that apply but we’re never going to say something that’s so rude, that you think we’re trying to upset you. It’s just everything’s a look. Everything’s a thing. I got a scene with a cow making faces and then she looks at you and says, “He got milk.”

We even got cow tipping.

And the #Mootoo Movement. 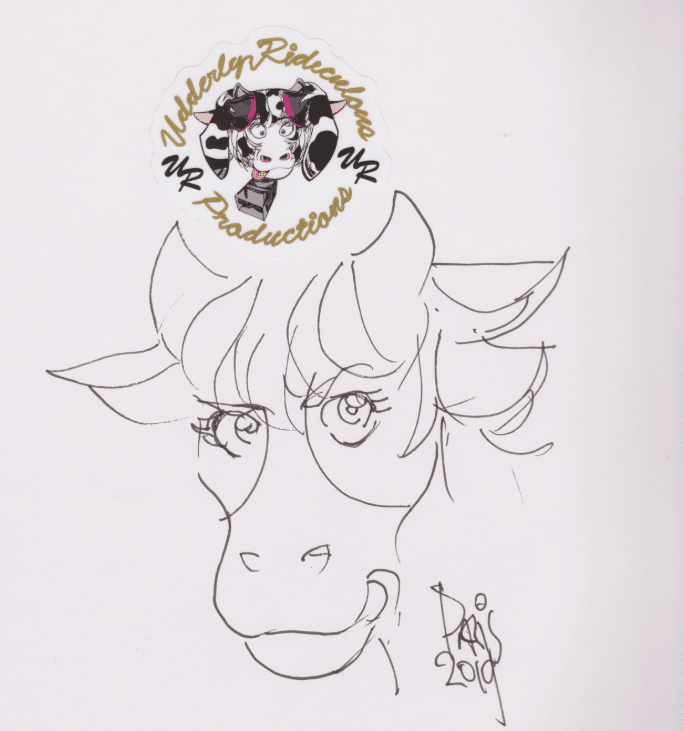 Paris Cullins is the creator of one and a character unto himself. If you’re shaking your head, join the club. The sketches are hilarious. Bodacious Bovines aside, as a comic collector, my focus was just on the titles and characters within my comics and not those who made it. His energy is contagious and seems to bring joy to all those around, so it’s easy to forget that individuals like him, through their day-to-day, year-to-year, decade-by-decade experiences, helped open up the comic industry for the current generation of Black and brown artists and writers.  Taking the opportunity to meet them and hear their challenges and triumphs can be a joy comparable to their work, and a lesson to help us be our best self.

On the movie front, DC Comics just announced that Ava DuVernay will be directing the New Gods movie, which will be written by Batman writer Tom King.  Also, DC announced late last year the Swamp Thing television show was announced with Blue Devil being a part of the series.

E.Angel is an engineer and holds a BS in electrical engineering from North Carolina A&T State University.  In her spare time, she works at her comic book store – Brainstorm Comics and Gaming – when she is not writing.  She’s a real nerd who loves all things Star Wars and Star Trek and is an avid gamer. E.Angel can be reached at e9of10@gmail.com or on either game platform as Bunnehs Sister.