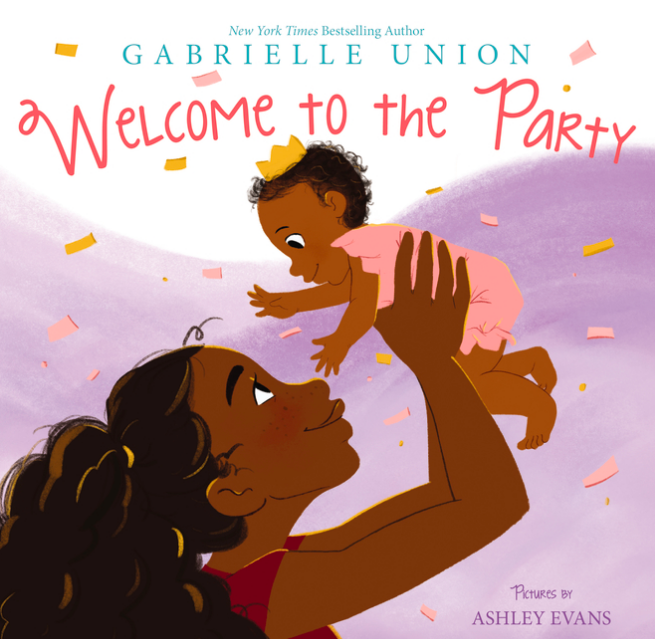 In addition to being an award-winning actress of both the big and small screen, Gabrielle Union has long been a champion of women’s health.

In her 2017 biography We’re Going to Need More Wine, readers get some of the very raw details about her own personal health struggles around infertility and trying to start a family. Now, on the other side of that long ordeal with a beautiful baby girl, she has written a book that focuses on the joy of bringing a new member into the family.

Welcome to the Party is an illustrated children’s book all about honoring a new child with bliss, regardless of how or when that might happen. The book, released earlier this month, depicts an enthusiastic Black family embracing their new baby, who takes center stage at their celebration. Inspired by her own journey to having baby Kaavia, Union dedicates the book to her daughter and other families who have lived similar stories: “Welcome to the party, you are right on time.”

For many families, that time can often be later than what was expected or originally hoped for.

In recent years, the L.A.’s Finest actress has been immensely open and candid about her multiple miscarriages, being in and out of IVF cycles in the midst of a busy filming career, and eventually deciding to have her baby via surrogate. When BGN spoke with her in a phone interview, we asked what she would have wanted someone to tell her during those times. She emphasized she would have appreciated more honesty about how isolating things could be. There were times where she found herself in what she called “Google rabbit holes” searching for communities online that were transparent about their experiences.

“I wish somebody would have explained to me everything that they’ve gone through and that there is a whole community of Black women with these experiences that speak openly about it, share resources, and are a source of inspiration,” she said. “You do not have to be on this journey alone.”

After years of emotional and physical challenges, Union and her husband Dwayne Wade welcomed their daughter Kaavia James into the world in 2018. In the time since, her Instagram has been flooded with her truly endless celebration of motherhood and family. Yet despite the beauty and joy, she said it was hard to find literature that reflected these kinds of experiences.

“There’s this idea that there’s only one way of creating or expanding your family, and anything outside of that is not worthy of even speaking about, much less celebrating,” she said. Yet as a stepmom to her husband’s children and nephew, as well as someone whose own mother began adopting at age 60, Union is living proof that families come together in all kinds of ways. With Welcome to the Party, she hopes to bring more visibility and acceptance to families like hers: blended, found, chosen, and altogether unique.

When talking about how she planned the book, Union explained the importance of telling a children’s story that didn’t depict the typical images of a pregnant mom, trip to the hospital, and then the appearance of the baby. “Not all babies arrive in the exact same way. I just wanted us to introduce her.”

The Being Mary Jane star also discussed how, despite being a New York Times bestselling author, writing a children’s book was a completely new ballpark. In facing that challenge, she describes how important it was to be surrounded by other Black women in the process. “I just had to humble myself and ask a lot of questions and rely very heavily on Ashley Evans, our amazing illustrator, and my wonderful editor Luana Horry,” she said. “Especially stepping into a space where I’m a complete novice, I wanted to be surrounded by excellence. And to me, there are no better people to understand this journey and to help me tell it than other Black women.”

The book has been positively received, particularly by foster parents, adoptive parents, and other families who have had children via surrogate. Many are grateful for another piece of literature that allows for more representation and space to tell different stories.

The actress shared what she hopes the book will impart to the children reading along: “You are deserving of joy, peace, and grace just by existing. You don’t need to shrink as you tell your story, whatever that story is. As you talk about your family, be as big as you want to be, take up as much space as you want, and just know that you’re loved and celebrated and welcomed.”

Signed copies of Welcome to the Party are currently available for purchase at Barnes & Noble.