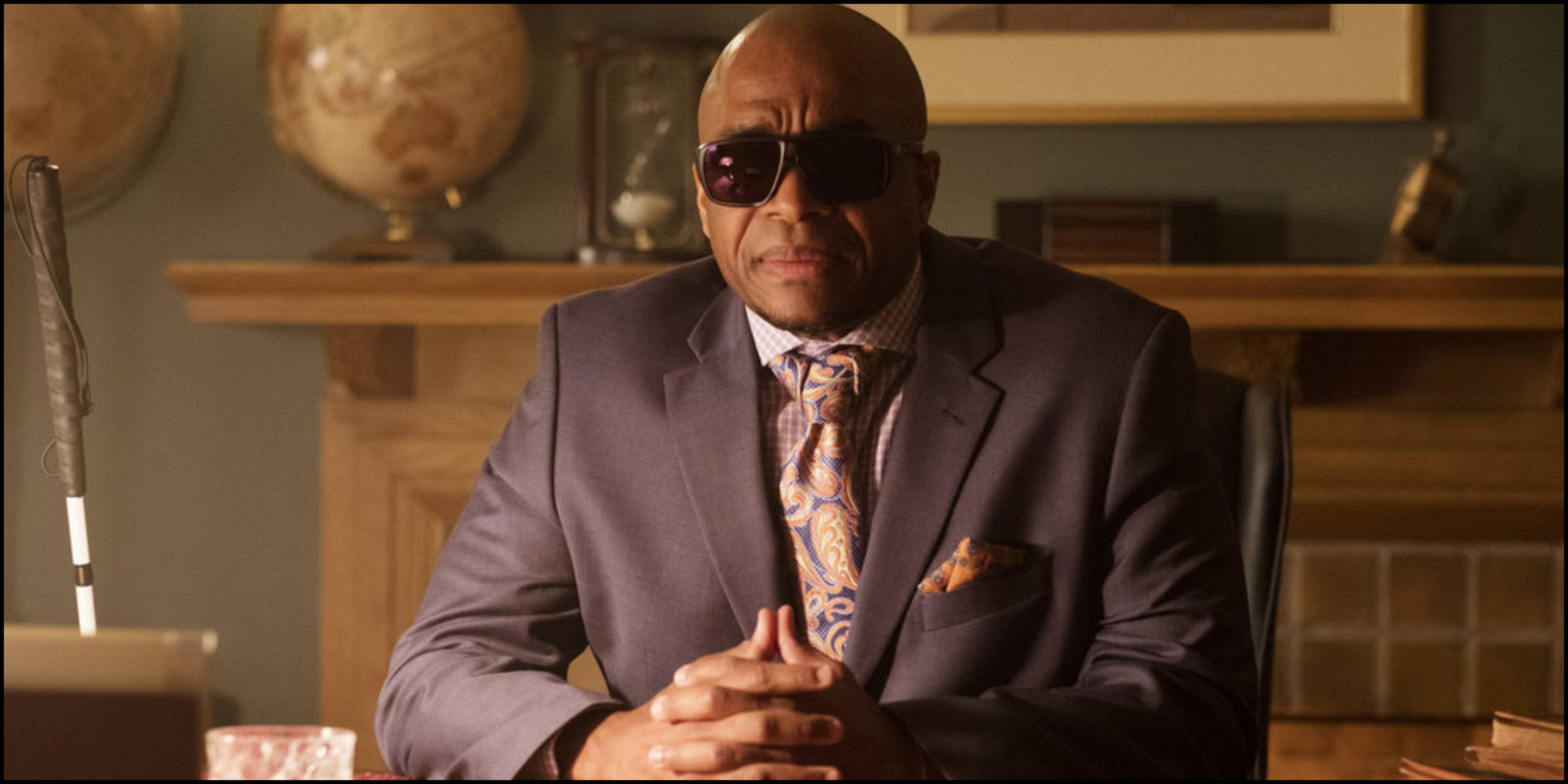 The set of Syfy fantasy series The Magicians is just as impressive and magical as it appears on the small screen. Sitting in the vintage-inspired, shabby-chic dining room of the Physical Kids Cottage under the lit TADA sign was surreal. It’s so nice to be on the set of a show that is an absolute fan favorite. It’s a bonus to get to talk to an actor who is just as much a fan of BGN as we are of him.

Rick Worthy, who plays Dean Fogg, on the set of The Magicians Season 4 was everything I wanted him to be and more. He walked into the room looking like a real gentleman with his suit and glorious tie. Worthy is very passionate about the roles he plays, and it shows in how open he is to discussing them. He even gave a demonstration on how to tie a tie the Dean Fogg way.

Check out the conversations we had about the Dean, mental illness, and of course the exotic array of ties he gets to show off.

Yes, you are! I’ve been dying to meet you guys. I want to be on your show so bad.

Like, I’m kinda fan-boying right now. Because I was watching some of your YouTube episodes that you did after The Magicians. And I was like these guys are awesome.

Yes, we absolutely love The Magicians.

I will give you my card when we’re done, and it’ll be great.

Everyone asks me, do I tie the tie? I’m like yes, of course I do. I tie my own tie, even on set. Yah. And I’ve learned I’ve become sort of obsessed with it, and I now know a few different versions of the “Fogg Knots.”

I would even go out to dinner. I might rock this and then, first thing I get is, “How’d you do that?” Or the, “I’m sorry, what is that? That’s really cool.” And it’s always good, you know, tip-off point to talk about The Magicians.

So, Dean Fogg — good guy or bad guy? Because at the end of Season 3, he made some pretty interesting choices.

It had to be done. Ultimate power move. I’ve always wanted to play him as sort of this, you know, this ultimate poker player, you know. Everything is very close to the chest. You’re not really sure what he is thinking. Is he going this way or is he going to that way? Is he good, is he bad? So, I personally loved seeing the end of Season 3 because no one saw it coming. And when I read it I said, “Yes.” Because I wasn’t sure myself how they we’re going to end Season 3 with Fogg and his relationship with the McAllisters as well as The Order. Zelda, as you know, essentially is The Order. So, I loved when he appears, blips in castle Blackspire and grabs the magic with Gavin and Irene, then they blip out. And everyone is like, “Holy fuck.”

And it’s as I’ve been saying, it’s something that he has had to create, this uneasy alliance, particularly with The Order and with the McAllisters, and find a way to hit the reset button because from Fogg’s point of view, magic in the hands of the students, who he loves… everything sort of went to hell. You know, when the plumber comes in and starts turning off magic, you know that. There are gods that we haven’t seen yet on this show that have been watching the events play out, you know. And they have decided, turn it off.

In the hands of these young humans, everything almost went to hell, you know. So, Fogg has decided, well as much as I adore them and I know there’s a lot of tough love the way he relates to his students, he’s had to hit the reset button and find a way to regain control of magic itself. So this season is going to be Fogg as sort of this business man, politician kind of guy. And he has a lot to do in terms of The Order, reporting to The Order, you know. But he doesn’t like it at all. He hates it.

Well that’s good to know. Yes you make some tough moves on the kids of the school, but they also come to you like Julia. She cured Fogg’s eyesight. Things like that. Alice comes to you. It’s like the strict yet loving father.

Yeah, absolutely. He’s very much like that you know and one of the things I love about Fogg is that he also tries to instill in his students the idea that they can think for themselves, and that they can challenge authority. That’s always been part of the whole relationship you know, and they challenge him. They will challenge him, and they will defy him and you know there’s a great line where Fogg says something like, “What’s the point? You’re just going to do what you do, regardless.” But underneath that, he’s like that’s exactly what I want you to do.

That’s what I love about this show, it’s like man, you’re talking about that, we’re going to go here, but we’re going to go really go over there. In terms of dealing with mental illness I think of Sera [Gamble] and John [McNamara]. I always think of them first cause it’s their pilot and they brought on Henry [Myers], Christina [Strain], and Noga Landau, and so many other writers and they have created a beautiful show that talks about real things and real issues and doesn’t kid glove anything.

I always think first of all, about Reynard and Stella or Julia. Even now you know it’s been four years, almost four years. It’s a really tough scene, episode to watch. It’s so intense that it’s almost too much for me. And at the end of the episode, there a 1-800 number that you can call if you know someone that has been a victim of rape or sexual abuse. And I love that about this show is that it’s never been afraid of going there and talking about something that we need to talk about.

Be it mental illness, be it sexual assault, or whatever it may be. Trying to use fantasy as a vehicle to also talk about something that is also happening in real life. I’ve been on other shows where you know I’ve done a lot of Star Trek. And I’ve done a lot of other things, Battlestar Galactica is probably one of the closest things to this show where we’re talking about something via politics or you know a fascist regime or whatever it may be, but it’s in a space opera, but we’re talking about something real and in our show, it’s not a space opera but it’s a show about magic, but we’re also talking about real life shit. Real life things that happen and how to deal with it. You know, sometimes people just need to be told, “you’re human.”

I grew up in the kind of house where it wasn’t okay to be not okay. You know I had a very stern father who, and a bit my mom but more my father, he was an old school southern black man who was like we don’t talk about mental illness, we don’t talk about nothing that … you know that you see on TV. Like our house is perfectly fine. Well, turns out that it wasn’t, and it wasn’t until years later that my dad and I were able to really say hey, you know dad I’m dealing with some things. And he says okay if you need help, go get it. But you know we live now in a world where we can have a show like The Magicians, and we can talk about issues like this and it’s great because it gets people permission to talk about things.

Sometimes it’s like you just need someone to kind of give you the green light and say it’s okay if you’re dealing with something and I can’t tell you how many people I’ve met, I also work on the TV show Supernatural.

Yeah yeah okay Supernatural you know it’s like, I love Supernatural. And you know Sera used to write for Supernatural. And you know that’s my show man. I love Supernatural as much as I love this show and I’ve met so many fans from Supernatural and now The Magicians, and they have been dealing with this issue or this health issue or that or this. And the show has given them a lot of hope and sort of a will to fight you know, and I just think that’s a wonderful thing about TV. It doesn’t always serve that function, but TV can be both entertaining and didactic and educational and in a way, therapy. You know it has for me anyway.

How was it playing Dean Fogg with everything that happened at the end of Season 3?

I loved it yeah. Because I kinda had this idea, like whenever I do any character especially if it’s a big character like Fogg or the Alpha or whatever it is, I write a very long bio, I write until my hand stops. I get my pen and paper and write, Okay, he was born this time, oh now I understand who he is, now I get, now I can say the first word of the script. That’s the life before that we all have before we step onto the stage. So, the audience doesn’t know all that but I know it and I bring that into the room or bring it to the set, on stage and that’s when I can start the character.

For Fogg, he has an immensely interesting past that started when he was about four years old up until now and no one knows it but me. And it’s so interesting that it makes sense why he is the way he is. Why he dresses like this, why he walks the way he does, you know. Everything about him all makes sense.

Season 4 is gearing up to be amazing. You can catch The Magicians season premiere on Syfy, January 23, 2019.