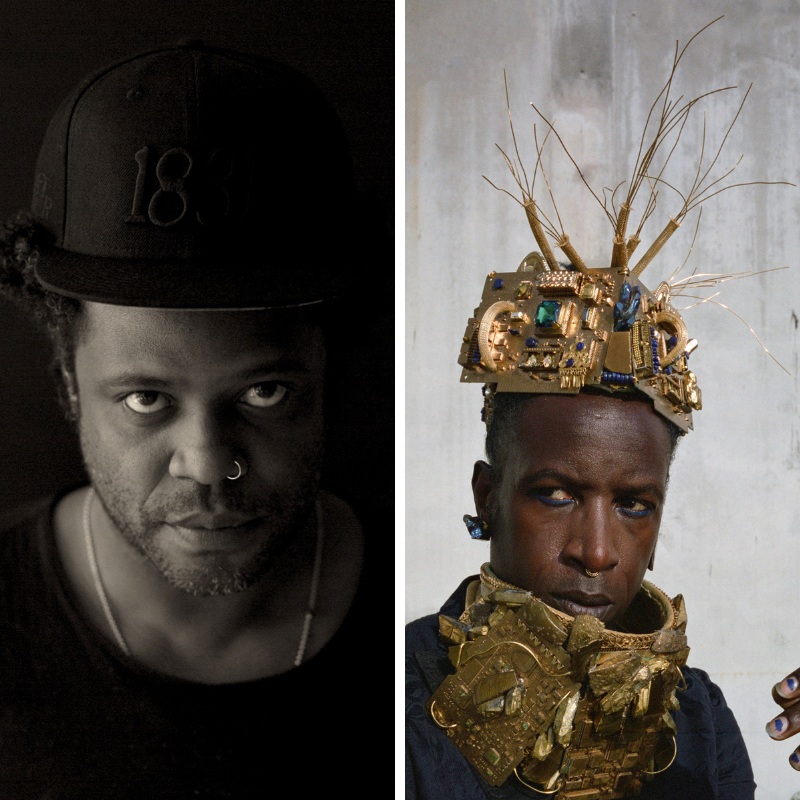 In Akilla’s Escape, Akilla (Saul Williams) exits his career of dealing cannabis, but when a robbery during his last delivery occurs, he confronts youth affiliated with a Jamaican crime syndicate that his father, Clinton Brown (Ronnie Rowe, Jr.) was involved in. Akilla stops one of the thieves, a fifteen-year-old mute and epileptic, Sheppard (Thamela Mpumlwana, who also portrays young Akilla).

BGN had the remarkable privilege to interview director and co-writer Charles Officer, and lead actor and composer Saul Williams.

Saul, it has been a while since you have acted in a feature film. What intrigued you about this particular project to not only act in, but to create music for?

SW: Charles and I met at the Toronto Film Festival back when my first film as an actor, Slam, appeared there. He mentioned, “We have to work together.” Since then, Charles and I have become great friends. Cut to two years ago. Charles sent the script. I was pleasantly surprised because there are a lot of people who say, “We’re gonna do something together,” but that something never actually turns up. I was blown away by the beauty of the story, the subtlety of the narrative.

When he told me, “I also want you to work [on music for the] film,” I was kind of taken aback. I was so excited to dive into acting mode. But once I got over the initial shock, some more magic in exchanging ideas with Robert Del Naja from Massive Attack happened.

This film holds space for the nuances of Black masculinity in a way that acknowledges poverty and political violence as a major influence while also acknowledging the necessity to not harm Black femininity in the process. Charles, I’m curious to know more about the process of writing that with your co-writer Wendy Motion Braithwaite.

CO: Being the youngest of four children and having three older sisters, I personally had experience of watching them grow and watching the violence they experienced protecting me — what my mother experienced at the hands of my father.

Akilla’s mother’s name is Thetis. There’s Greek mythology through leading her son to question what his weaknesses are.

There is this space where I believe that masculinity cannot exist without femininity. But there’s an idea that it exists on its own, and it hasn’t been my experience.

Akilla is experiencing his own thing in his relationship with his mother [Olunike Adeliyi]; and that carries with him. That stays with him. Therefore with Sheppard and his aunt Faye [Donisha Pendergast], it’s not a question [on whether to help them or not. He says, “I’m coming now!” He barely knows this woman. That move is not a weak move.

Their platonic intimacy got to me as well.

CO: I loved it, too. Wendy and I kept talking about this moment. While filming, there was a take that included a kiss.

SW: Me too! Me too! It really wasn’t in the script, but in terms of coverage, they were like, “Let’s do a take [with a kiss].” When I finally saw the film, I was so glad that they made the right choice.

It speaks to how Saul has been raised by a lot of women as well.

There are a lot of intersections of Greek myth and masculinity in this film. How intentional was this for both of you?

I also feel that cinema creates mythology. I’m dealing with the mythology of violence in this film that gets generationally passed down through stories. I felt that with Akilla, his character will be talked by this young Sheppard, who will pass this story on for generations.

SW: What I love about Charles is that our relationship [has to do with] the deconstruction of the patriarchy. We have both spoken openly in ways to each other that are not celebrated in any public light of how two Black men are assumed to position themselves in relation to the question of masculinity, and the structuring of power and authority in modern day society.

Recurring questions for my creative process are: “How do we deconstruct the patriarchy?” “How do we find ways to not perpetuate the myths that raised us, whether it’s a myth perpetuated through cinema, religion, society itself handed to our fathers?”

We have to throw these things into question. We have to!

With Charles, even when he first sent me the script, I was able to let my guard down in ways that I’m not. For example, someone asks me to jump on a song with them. I hear their verse and I’m like, “Dude. Why you sayin’ stupid sh** like that?” It’s usually something they think belongs to the genre, but is really something that perpetuates an idea of manhood that’s just absurd! There’s that quote from Henry David Thoreau, “What I have to do is to see, at any rate, that I do not lend myself to the wrong which I condemn.”

It is upon us in our creative work to speak openly about these existing structures, and to leave space for what we’ve learned. I know that you and I, Charles, have no space for “locker room talk.” It’s a crazy reality that imposes itself on the male psyche to choose to belong to that privileged structure again and again.

The way that it plays itself on oppressed groups who may even make as strong of a connection to it even though they see the bullsh**! They see the trauma their mothers have been through! They see it all!

It is so incredible how Sheppard and young Akilla are played by the same actor. Akilla literally sees himself in this young boy. Both Akilla and Sheppard are applying Clinton Brown’s advice on “self governance.” Was that always the intention after the script was finished? How did it feel for the both of you to witness that on screen?

CO: I did not [see that as the initial intention]. Saul didn’t know this, I was initially thinking of Saul’s son to play one of these roles.

I was talking to [producer Jake Yanowski], “I’m really thinking about casting Thamela to play both roles.” He said, “I love it!”

Having [Thamela] play the same character wasn’t the plan until we were greenlit to make the film. Thamela [also said], “This is a wild idea, but I would love to do it.”

SW: That’s wild! I thought it was always the idea!