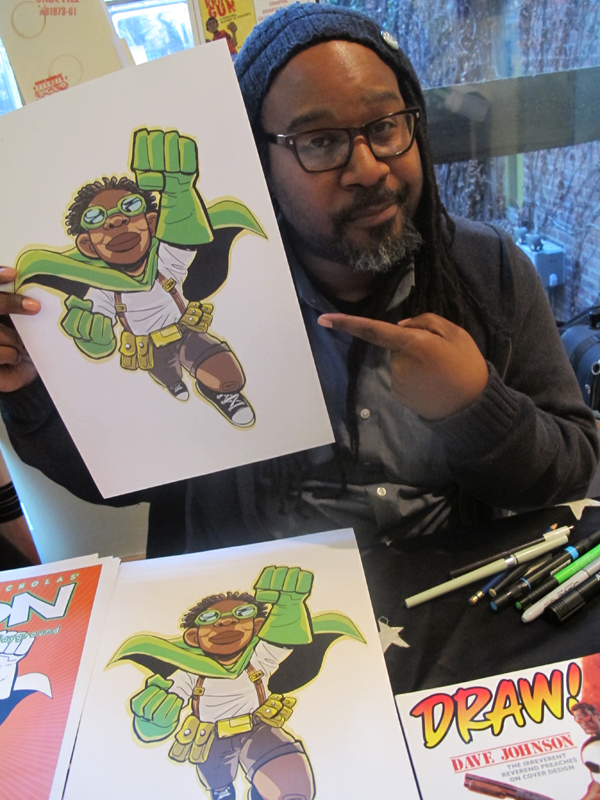 Jamar Nicholas is an award-winning African American cartoonist, graphic novelist, and educator based in Philadelphia, Pennsylvania. He is known for his graphic novel adaptation of Fist, Stick, Knife, Gun, a memoir written by African American social activist Geoffrey Canada in 1995. Nicholas’s work discusses topics such as bullying and violence while providing an alternative, positive portrayals of black individuals.

BGN’s E. Angel sat down with Jamar at Baltimore Comic-Con in the following interview and discussed his work as a comic artist and his book Leon: Protector of the Playground

BGN: Well we’re really happy to see you now. We like to support independent artists and creators at Black Girl Nerds. So I just had a few questions we wanted to ask. Sure. When I looked at the dedication it’s dedicated to your mom.  So can you talk a little bit about Ms. Eula, and why she is your hero?

Jamar: So when I was young too it was it’s always been my mother and I. When I grew up my mother was a commercial artist and she kind of dropped in and out of art school.  She had a studio in whatever apartment we lived in, and I used to hang out under the desk and steal markers that fell on the floor.  She was my main reason for wanting to be an artist, because was she was an artist.  And would really made that more important to me is that it wasn’t a dream.  You know especially like growing up in the hood like I knew a lot of kids drew, but no one knew that you could do it for real or professionally. And I watch my mother do that made me break through a barrier that other kids never got over.

BGN: So where did the idea of Leon come from?

Jamar: Leon is an amalgamation of a lot of things that are from my childhood; my love her superhero tropes and also my problems with just being a kid.  I hated being a kid. I didn’t like not like childhood. I was a very social kid, but I was always disillusioned with other people. You know anything about fake friends?  I guess they call them frenemies now. They were just fake friends back in the day. I had a lot of those. I was a trusting kid, and I wanted to think that somebody is going to be your friend they’re going to have your back or whatever and I found out that wasn’t the case. So there are little parts of that in the book, where you find out that Leon, just kind of walks his path and other kids bounce off of him. I wanted to figure out a way that I could put that into a character I wanted to have a superhero that wasn’t all super-super and not Teen Titans.

You know what I mean. He’s more like a normal kid that has this thing rested on top of him, and the dynamics between kids is really important to me. So I wanted to have a project that could touch all of these areas.

BGN: So, they say a good…nemesis really helps define a hero.  So who is or are Leon’s enemies or frenemies, as the case may be? 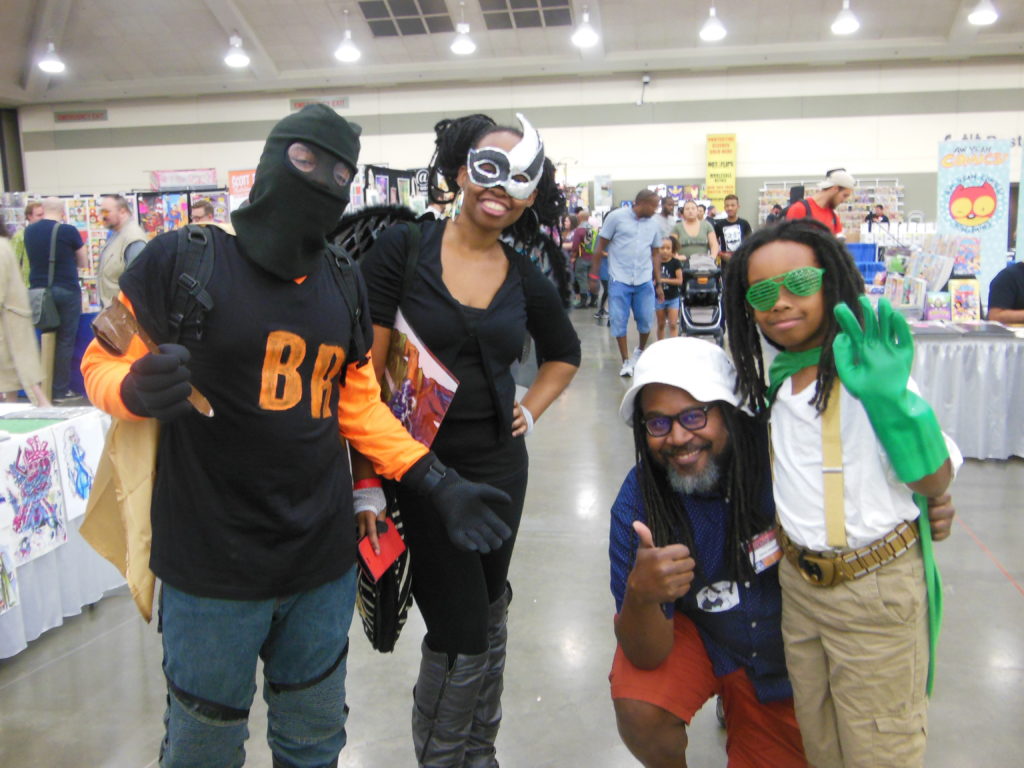 Jamar: So, the main characters that you meet is the Steeple-fingered villains, which is kind of a Legion of Doom in the Treehouse of Terror and Tyranny. This group of little supervillains is kind of like the Legion of Doom from the Superfriends cartoon. They have a treehouse that they hash their schemes from and they’re all just [kids, but] really not … threatening kids. But that’s also something about kids they don’t have to do something that’s outrageous for them to be fearful. You know what I mean…kids being mean is enough by itself.

BGN: What about the hall monitor?

Jamar: Clementine Justice, is the queen of the hall monitors and is kind of like the major irritation point with Leon in school. Everybody seems to like Leon except her. I wanted to try to create almost like a Margaret to Dennis the Menace if you remember Margaret.  Margaret was just tall and really imposing. And she just didn’t like Dennis. And you never really got into [why], it was just [that] they just didn’t like each other. And Clementine has her own stuff going on, and she is I don’t want to say she’s jealous or salty, but she doesn’t see what the big deal with Leon is about. And that’s kind of her driving power. You’ll see them kind of interact in a book and there’s just there’s a little bit of a story arc there. But she also has minions that she does not care about.  …She doesn’t even know their names. One of the kids’ name is What’s-His- Face, and another is Number Two. And also Clementine has a little kid that’s in love with her, named juice Box and you’ll see Juice Box carrying around Clementine’s books around the graphic novel.

BGN: BGN was so pleased to see Leon headlining this show.  How did that come about?
Jamar: Well you know I’ve been a big fan of the Baltimore Comic-Con for years. It’s my favorite show on the East Coast and you know I’ve been talking about Leon for years and Mark Nathan, who is the showrunner is really supportive and he’s a friend, and when I talk about Leon and some things the first time he said well when is it coming out?…I said uhhh… and he was like “give me the book, I want Leon.” …So them he was like, “what can I do to help?”  I suggested “let’s have a Leon day” and he said “we’ll figure something out,” and then, the next thing I know, I got asked to do the cover of the program and I almost didn’t know that Leon was going to be on the [convention] shirt this year… and it sort of went from there. It was sort of like a happy storm.
ALSO READ
Jéan Elie on New Series ‘Send Help’

BGN: Is there a message that comes through? Is this an after-school special book?  How would you describe it?

Jamar: The quick elevator pitch for Leon is [that] he’s a sixth-grade superhero whose powers are common sense. And just from there I just go into just you know what would you do if you were a kid? Who is super in a super world?

BGN: What’s next for Leon?

Jamar: So, right now, I have a soft cover and a hardcover edition of this book. I have been talking to several people who are very interested in Leon and its wild to me and I’m entertaining things right now.  I’m very eager to do another volume.  This one took me awhile, the next one won’t take that long… This came out three weeks ago, I believe but it’s still sitting in my studio. This actually was part of a Kickstarter that me and my virtual studio Comic Book Diner, put out some time ago and it was a three-book Kickstarter and my book was the third and took the longest to get done. So my first order of business was to make sure that backers get their books…I’ve been blown away by the support, and it is making me eager to do something else, so you will see more of Leon.

Jamar: Well, one thing that I have to add from this weekend is that I was very proud to be one of the original jurors for the Ringo Awards that happened here last night. Some of that has to do with my friendship with Mike Wieringo who passed away 10 years ago. It was really tough, but I’m really glad that we could celebrate him.

I have a lot of things on my plate but I really don’t have something that I can say yet. What I can say is that this is my 20th year in comics. And we’re looking forward to creating some hard copy printed matter of some of my studio projects and we’re working hard on a 20 year retrospective of my career which I hope to have out maybe right after, like in the spring.

You can get Leon: Protector of the Playground and other titles by Nicholas on Amazon or online at https://mkt.com/jamar-nicholas-studios/ .