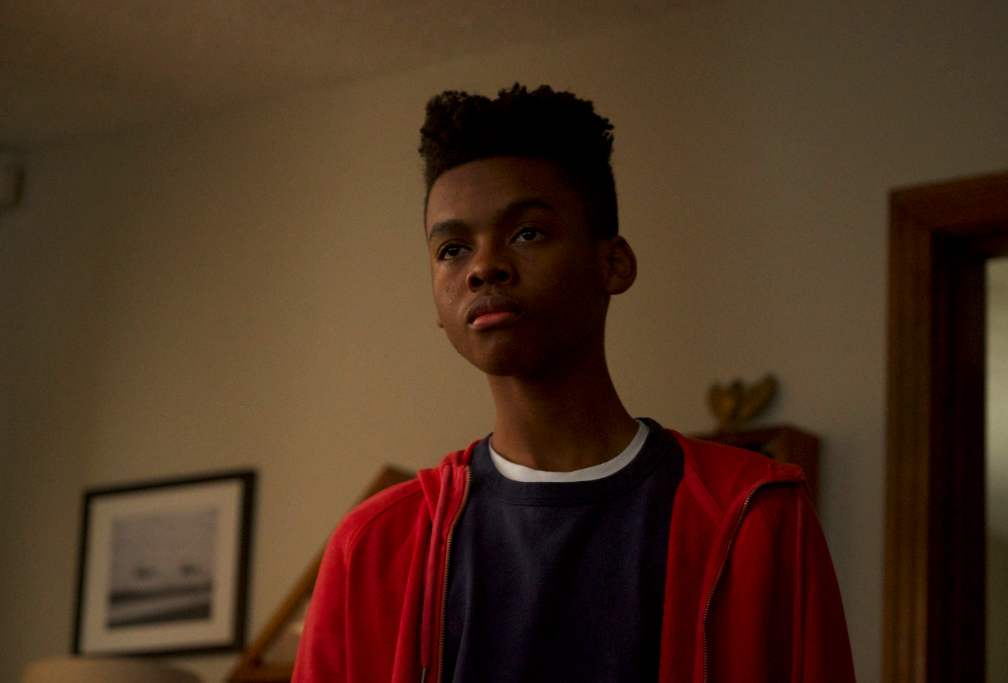 Get your tissues ready, because this one’s going to make you cry for sure. Filled with unexpected plot twists and romantic cynicism, The Violent Heart is an emotional drama that’s not your typical boy meets girl love story. Now in theaters and on-demand, The Violent Heart is about life after nine-year-old Daniel (Jovan Adepo) witnesses the murder of his teen sister. Now a young adult, Daniel must learn to cope with his feelings and find his place in the world as he attempts to fill the shoes of his father, a decorated Marine stationed in Afghanistan. Daniel resides at home with his mother and younger brother Aaron (Jahi Di’Allo Winston) while he works at an auto shop to makes ends meet. It is there he meets a college-bound high school senior named Cassie (Grace Van Patten) who greatly impacts his life to the point that secrets unveil from both of their pasts.

In The Violent Heart, each major character is important to driving the plot. Because the film begins with such a unique backstory, certain characters help tie the story together to create a clear understanding of the past. In a recent interview, Black Girl Nerds sat down with Jahi Di’Allo Winston, who plays Daniel’s brother Aaron, another central character in the film. Winston discussed character development, starring in a drama, symbolism in the film, and much more.

What was the experience like to play a character in such an emotionally-charged drama?

It was fun, heavy but fun. I think it was not too heavy, which I was glad about, because after this I had to do another film that was a lot heavier where I killed a cop. So I was like, “Okay thank you, this is heavy, but the right amount of heavy to keep my sanity.” It was cool just having the opportunity to work with other great actors who made it as smooth a process as possible and to make it as fun as possible. It was just a really cool, really fun, chill environment getting to work with Jovan and Mary and Grace. It was just awesome.

What was your favorite scene to shoot?

I think any of the house scenes, specifically, the house scene in the third act where I have the confrontation with Mary and Jovan. That was fun because getting that opportunity to play and let out all of the steam that I’ve been bottling up until that point. You know, all of the house scenes really, because I just got to sit and talk to Mary and Jovan for three days in a room while we waited for whatever shot. Sometimes it would take like 20 minutes, so we would just talk, and talk, and talk. So that was a lot of fun. The three of us have really great chemistry off-screen as well. It was just a lot of fun, great conversation, lots of laughs. It was a really cool, chill environment.

The film deals with issues that occur in real life like losing family and coping with past trauma. What sort of person would resonate with your character Aaron?

I think the person who feels misunderstood maybe. In many families, there are uncovered and unresolved incidents and mysteries about how things have sort of come together. That person can absolutely resonate with someone like Aaron, who is very relentless in his curiosity about who he is. The person who feels misunderstood, who feels like they’re not being heard in their own space. Usually, young people but also people of any age can relate to that theme. I think that’s the person who can relate to Aaron and just relate to the story as a whole.

In the film The Violent Heart, every major character is significant in their own way. How was your character Aaron significant or different in comparison to the others?

He’s the one who can see through all of the BS. He sees through it all. I think he speaks for the audience in a way. Like what the audience is thinking Aaron is the one who says it out loud on screen, which I think makes him stand out from the other characters. He’s at the center of all of the mysteries and some of the lies that have been covered up. He’s like the manifestation of all those things. So when everything goes awry, he’s left to pick up the pieces and try to be the backbone of the family and try to take care of his mom and figure it out. That makes him unique in his own way and makes him a standout character from all of the rest.

There is a lot of symbolism in the film. Why is the symbolism with flashbacks important to the film?

I think it informs who our characters are when we first meet them. It also gives us a lot more insight into the why, which I think is important if you’re an audience member or a creator just trying to formulate a story. Where a creator’s vision was going, I think the flashbacks definitely made sense. I think they inform who the characters are, I think they inform the story that we’re telling. Specifically, as it pertains to Aaron, they really show us all the things that he’s trying to uncover throughout the present day. He’s trying to get to that. They inform a lot of things about Daniel’s character, Jovan’s character, about who he is, what he’s running from what he’s trying to come to terms with. So there’s that duality there with Daniel and Aaron. They definitely inform the story that we’re telling as a whole which I think is important.

Being that this isn’t your first acting role, what steps do you take to create a believable character when taking on any role?

I think you just have to do everything that you can to really get in tune with yourself so that you can make the character as believable and as realistic as possible. I think that’s what I attempt to do with every role that I take on. I try to find honesty in myself because if I don’t believe it I can’t really play it. That just makes it a lot harder if I’m having trouble really believing it. The way that I try to relate it back to my life is by tapping into my own insecurities or my own doubts, my own fears, my own guilt, my own feelings of inadequacy. All of those feelings can help inform a character. They can serve as the best referential tool or best resource to really make a character full and three-dimensional. Even if it’s not on the page.

In the future do you see yourself taking on more emotionally-complex roles or films like The Violent Heart?

Of course. I’m definitely looking for the best characters and to work with the best directors and to tell stories that I would want to see. Whatever it is, just something that challenges me and pushes me as an actor and stretches my instrument as much as possible. I’m always interested in continuing to make stories that mean something to me on a social and spiritual level.

The Violent Heart is now available in theaters and on demand