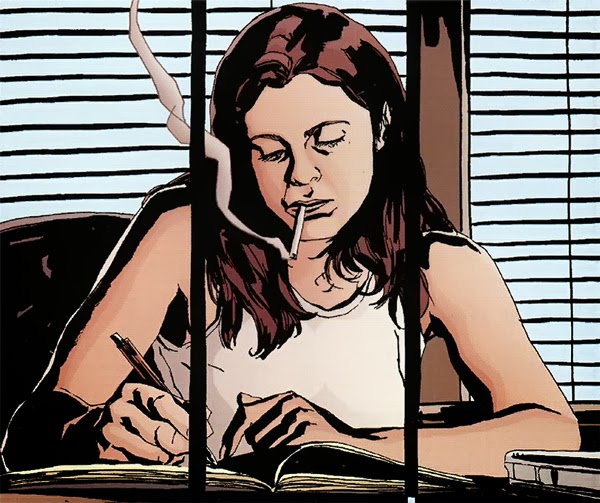 Up until the Netflix series adaptation, my knowledge of Jessica Jones was purely Wikipediaish. Almost two years later, after going through the rest of the Marvel Netflix universe, I decided to rent Jessica Jones: Alias by Michael Bendis. I’ve heard about this comic in passing around the internet, but I never knew how good it actually was. If I knew how good it was, I would’ve gotten it some time ago.

As I mentioned earlier, the series was written by Michael Bendis and is illustrated by Michael Gaydos. As described by a character later on in the comic, Gaydos’s art is a mix of modern with an indie touch. Initially, it came off as a little ugly with a few of the characters looking similar, but it’s not bad art at all – just different. There is some painterly art in the later issues that break from the mold.

In terms of the narrative, Alias follows retired superhero, Jessica Jones, as she runs a private investigation company where she is the sole employee. Throughout most of Alias it doesn’t feel much like a superhero comic. Jessica uses her powers maybe only twice and very briefly during the first three issues and there aren’t super-powered shit going on around her most of the time. This comic instead focuses on investigations, Jessica’s psyche, and her relationships with people.One of the first things I noticed is I was reading the character of Jessica Jones in Krysten Ritter’s voice. I do feel that Ms. Ritter captured this character perfectly. She’s just as sarcastic and smart as the comic version. The comic version of Jessica Jones feels a little less gloomy in this that is until The Purple Man arrives, but we’ll talk about him later.

Jessica’s investigations are the vehicles for her growth as a person. The first case starts out simple enough as is, but turns into something else while Jones is looking a government employee’s younger sister. Because I feel it’s best to read Alias without knowing much, I won’t say much other than it leaves Jessica feeling paranoid and hurt.

Her second case in vol. 2 has her searching for a missing teenage girl in a rural town in the state of New York. Now for this case, there is a lot I want to say, so skip ahead until you see the mark for spoilers ended.

Once Jessica arrives at the rural town she discovers a picture of herself in the local newspaper announcing her arrival to find the missing girl. Understandably, that would make her upset as it jeopardizes her case and the missing girl if she is being held captive. The first person she meets in town is a cop that looks like Luke Wilson. He immediately comes off suspicious as he stands there like he’s been waiting for her and offers her help in her investigation with a smile on his face.

The investigation has a strong air of mystery around it. The mother of the missing child suspects her husband to be behind it and once we see him he’s immediately defensive and claims his wife blames him because their relationship veered off badly. He does come off suspicious, but you can’t be entirely sure. Here the cop shows up as well, willing to lend a helping hand. He and Jessica end up sleeping together and Jessica wakes up in a jail cell because he apparently couldn’t handle her in the bedroom.

After meeting a student that attends the same school as the missing girl, the student tells Jessica that she thinks the missing girl is a mutant. Mutants in the Marvel universe are ostracized and this begins to churn the idea that the missing girl was attacked or killed for being a mutant or ran away from the aggression.

Jessica’s investigation leads her to a church where a pastor practices her sermon for the following day. His sermon is full of derogatory comments about mutants, adding more to the theory that the girl was a victim of mutant hate. Jessica eventually goes back to question the father again and she finds him dead, marking him out as a suspect. A nearby neighbor notifies Jessica of the missing girl’s location. It turns out she ran off to get away from the bigotry in her town that extends to black people and homosexuals. Once the mother and daughter reunite, a fight starts, and the girl runs off once again. The end of this chapter was emotional and the journey was intense.

Volume 3 follows a strange story that involves yet another missing girl, but this one happens to be a superhero. Up to this point, this is probably the least interesting of the stories, but I was still entertained throughout due to the change in the comic’s structure. The dialogue is laid out in a script style over the painterly images that set the scene. Here, Jessica is set on ends with J. Jonah Jameson of the Daily Bugle and while throwing insults at Spider-Man and superheroes in general he asks her to take on the case of unveiling Spider-Man’s identity. Jessica seems turned off by Jonah’s tirade against superheroes, but she takes the case anyway. This part of the comic feels separated from the rest of it as it has a different visual style by dropping the comic panels and it is like its own mini-story that doesn’t have much impact compared to the rest of the story.

The final volume is where we finally get to see Zebediah Killgrave, The Purple Man. The Purple Man is a clearly disturbed individual who has no remorse for people or his actions. His past isn’t solely tied to Jessica in the superhero realm, but Jessica suffered the most from him. Her being under his control for eight months was carried over from the comic to the show, but his motives were different. The Purple Man doesn’t have a twisted unrelenting love for her like in the show and he never used his powers to sexual assault her. He does bring a bit of the fourth wall breaking that I found hilarious the first time, but waning on the recurrences. He’s still a great villain in this, but he feels less threatening.  Multiple people have encountered him before and I find it surprising that they managed to take him down somewhat easily when his power is to control people by only opening his mouth. Her takedown of The Purple Man didn’t feel all that satisfying, but the story was overall enjoyable.

Throughout Alias we get appearances from other superheroes. Carol Danvers (Captain Marvel) is Jessica’s personal friend and introduces her to Scott Lang (Ant-Man) who she starts dating.  Daredevil also shows up, but only in his Matt Murdock persona and provides both work and legal protection for the PI. She also has a fling with Luke Cage. Luke in this threw me for a loop. His personality in this seems to be in complete opposition with the Netflix show. He cusses up a storm, treats Jessica like a side chick when she shows up at his door at 3 in the morning, and is a little mean at least to me. Alias sets up the couple’s eventual marriage.

Overall, I massively enjoyed Alias and will be definitely purchasing this so it will stay in my collection.

While the Netflix series focused on Jessica confronting Killgrave, Jessica Jones: Alias primarily focused on investigations which I hope season 2 of Jessica Jones will focus on now that Killgrave’s arc is over.