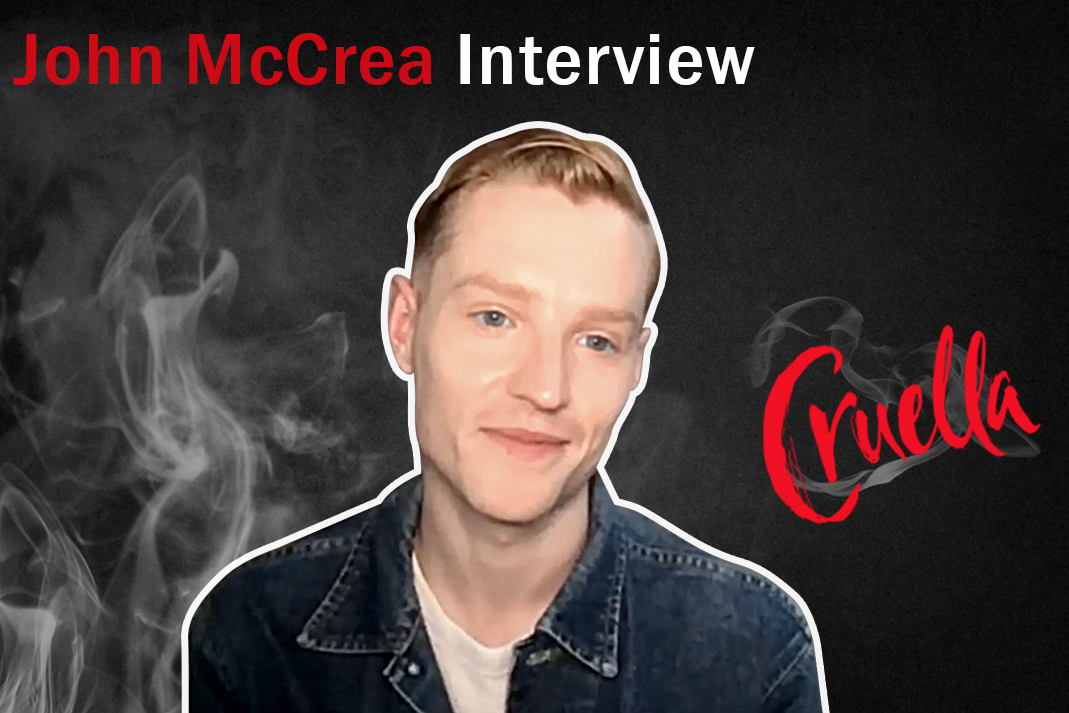 After much anticipation, Disney’s Cruella, directed by Craig Gillespie adapted from a screenplay by Dana Fox and Tony McNamara, is about to arrive on Disney+ and theaters on May 28. This live-action prequel of the classic 101 Dalmatians film stars Emma Stone and Emma Thompson.

The film is set in London during the 1970s with the backdrop of the punk rock movement and evolution of the fashion industry.

It unravels the story of Estella, a young fashion designer who eventually becomes the Cruella de Vil that many of us have come to both love and hate over the years.

BGN was able to catch up with the multitalented John McCrea (Dracula) on his role as Artie, a member of Cruella’s entourage and all-around chic dresser.

He’s the first notable openly gay character in a live-action Disney film, and fans are thrilled. Artie’s character is true to who he is, which makes him a touching character for viewers of all ages.

McCrea shares, “I think he just lives authentically and I think he’s proud of who he is. I think there’s a level of pride in him, of who he is, because I think he knows that he’s a good person.”

Artie spends his time as a vintage shop owner but also remains passionate about being a loyal friend to Cruella.

“He’s an influence in her life that she’s never had before, which is another creative person, ” McCrea explains.

“When she meets Archie, it awakens something in her for the first time in which someone validates her and says, yeah, you are a creative person and you just have to show that to the world,” he adds.

One the central forces that bonds Cruella and Artie together and weaves beautifully throughout the film is fashion.

In fact, McCrea explains that his favorite part of playing Artie was the clothes. “The clothing is just incredible. I love it so much. It was always such a treat to get into the costume room and see what wonderful stuff I was going to wear that day.”

He went on to mention the depth of fashion in the film and how it made so many elements stronger. “It’s a film about fashion and how that becomes a tool you use to present who you are to the world. It really is important to him that the image he puts out. There’s great care in it,” McCrea said.

BGN also was curious to know how Artie and McCrea are both similar and different when it comes to their personalities.

“We’re similar in some ways and completely different in others,” McCrae said. “I mean, I think our images are obviously very different.” He goes on to add, “Artie cares a lot less about what people think than I do. I’m trying to care a bit less. But, you know, we’re all human. So we’re all affected by words because they are affecting things.”

With that said, he comes back to some of their similarities, “We’re both quite chill and quite relaxed. I think I can be quite levelheaded, at least I hope I can.” He laughed and added, “I can hear my friends and family laughing at me.”

One thing seems certain, both Artie and McCrea are very talented and are definitely forces that drive the film home.

While the list goes on for reasons to appreciate Artie and his flare for fashion and friendship, there is another powerful takeaway from his character. Many are thrilled to know that Artie is hopefully the first of many openly gay characters yet to come in the Disney world.

McCrea gave BGN some insight into how people have responded to Artie being gay. “I’m lucky that I didn’t have to see any of the responses. I get that people are talking about it, which is great. But I mean, my friends are proud of me. That’s always that’s always something that makes me smile.”

It’s news that has been making many others smile and feel proud of both McCrea and Artie as well.

Disney seems to be broadening horizons over the years and exploring new character avenues and inclusive storytelling. We’re excited to see what happens next.

Cruella premieres today May 28 in theaters and on Disney+.

Here’s What We Know About Disney’s Upcoming Film, ‘Cruella’