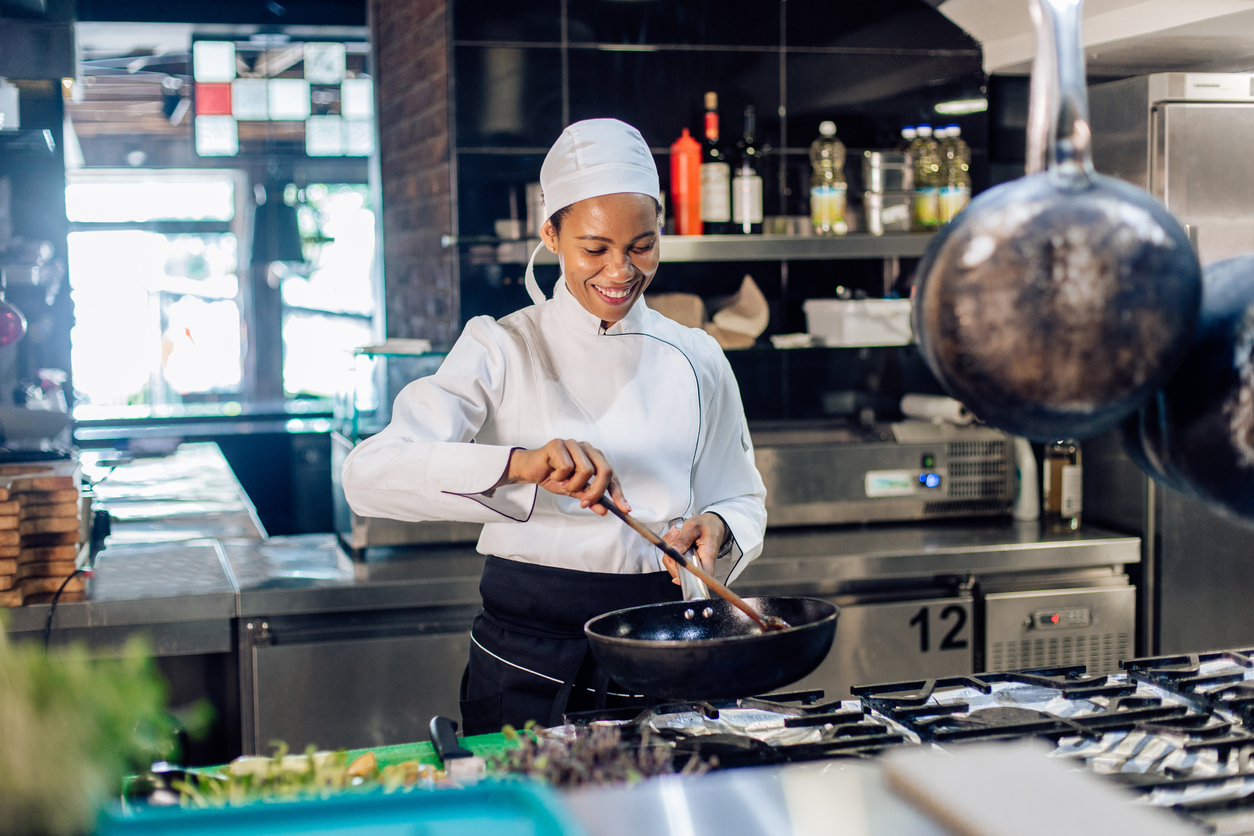 July is National Culinary Arts Month, recognizing professional chefs and cooks who bring us amazing cuisines. This month, culinary schools, restaurants, and kitchens honor chefs for their innovative recipes and creativity in the industry.

“Food is love,” as my Nana demonstrated daily in her tiny kitchen in Kansas City. Her recipes were passed down from her mother and grandmother. She truly was the first chef I saw growing up, and everyone felt the love at her dining table.

If you’re like me, food shows and cooking competition shows stay on your watch lists. I love them all! This month is an opportunity to celebrate ones that create food and bring to light voices and stories that may go unnoticed.

A painful history of enslavement actually produced some of our most beloved foods. It’s not easy uncovering the stories of enslaved cooks because few records were kept. From the cast iron skillets they used to the gardens they grew it’s clear that enslaved cooks were central in the birth of our country’s cultural heritage.

Zephyr Wright was the personal chef for President Lyndon B. Johnson and rallied crowds of people with her comfort food. In 1942, Wright started working for President Johnson as a maid and cook to help pay her way through college. She stayed with the family until 1969. One of her biggest hits was peach cobbler. Not only was she a force in the kitchen, but Wright is believed to have told President Johnson of her experiences with discrimination. When he signed the Civil Rights Act of 1964, Wright stood right there. He gave her the pen he used and said, “You deserve this more than anybody else.”

When we talk about Black women paving the way in culinary arts, Edna Lewis was one of the greats. A chef and cookbook author, she taught the American public to appreciate southern cooking in a new way. She was one of the first Black women to write a cookbook that did not hide the author’s real name, gender, or race. This was rare at that time for a Black woman’s published work.

Growing up in the early 20th century, Lewis did not have the luxury of modern cooking appliances. However, she inherited the creativity and resourcefulness central to Black food preparation. For example, without access to measuring spoons, baking powder was measured on coins to ensure the right amount was used in each dish.

Lewis spent much of her career cooking in the South but returned to New York City at 72 to become a chef at the Brooklyn restaurant Gage & Tollner. She received “Who’s Who in American Cooking,” by Cook’s Magazine, an honorary Ph.D. in Culinary Arts from Johnson & Wales University in 1996, the James Beard Living Legend Award in 1999, and was named “Grande Dame” by Les Dames d’Escoffier International in 1999.

Another area that is starting to emerge is how Black chefs are portrayed on television. One gem I found on Discovery+ is The Great Soul Food Cook-Off, a soul food cooking competition series celebrating Black chefs and Black culinary traditions. I was excited to find this show because I had never seen one like it. The show challenges Black chefs to highlight the past and present of soul food. In the end, the winner takes home $50,000.

What makes the competition different is that it centers on Black chefs and soul food cooking which celebrates the creativity and skill of our culture. For example, the Soul Starter Challenge pays homage to the “meat and three,” a meal featuring meat and three sides that are a staple in the Black community. These chefs prepare smothered pork chops, macaroni and cheese, collard greens, potato salad, and more. Trust me, don’t watch this show hungry.

With over 145,000 chefs employed in the United States, only 25 percent are women.

Black people — specifically Black women — have been underrepresented in the culinary world. Although the number of Black chefs is increasing, there is still progress to be made in giving them the recognition they deserve.

In my hometown of Kansas City, Black women chefs are making their mark. Known as “Chef Shanita,” Shanita McAfee-Bryant started thinking up recipes and cooking at age 13. In high school, cooking classes were where she was able to experience a formal culinary education, and graduated from the culinary program at Johnson County Community College. She competed on Food Network’s Cutthroat Kitchen and won. The rest is history.

In 2017, Kimberly Brock Brown became the first Black woman to serve on the board of the American Culinary Federation (ACF), an organization 93 years old with over 17,000 chef members. In August 2022, she will be inducted as ACF president during their national convention and serve a two-year term. Brown decided to run for president because “I wanted women to have a voice and position of leadership in the organization. I have always preached to others that when opportunities present themselves, you should take them. Now, I felt it was my duty to practice what I was preaching.”

This month, we can celebrate by trying a new recipe and post ourselves cooking it on TikTok. Try a new restaurant and share photos. Shout out your favorite chef or cooking show. Don’t forget to add shows to watch lists like The Great Soul Food Cook-Off, Cutthroat Kitchen, MasterChef, and Chopped to name a few.