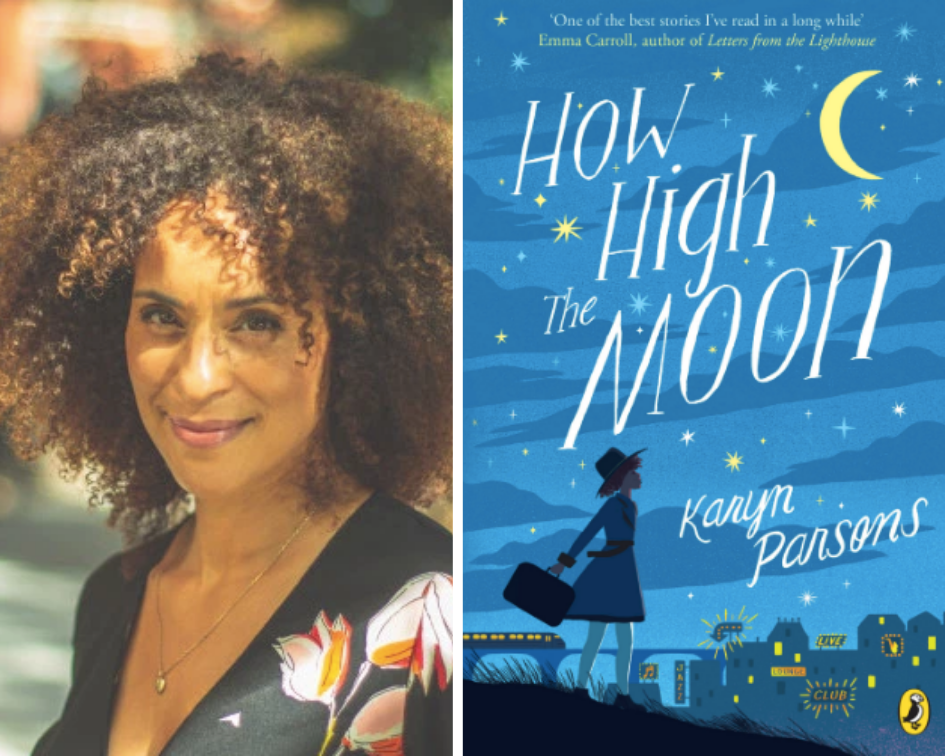 In the 1990s, I, along with millions, watched Karyn Parsons barely tolerate Will Smith as his socialite cousin, Hilary Banks on the hit TV sitcom, The Fresh Prince of Bel-Air. After the series ended in 1996, Parsons acted in some movies, but her creative passion grew. She founded Sweet Blackberry, a non-profit organization, and turned little known Black History stories into animated films.

Aired on HBO and currently, on Netflix, the films are narrated by Laurence Fishburne, Queen Latifah, Alfre Woodard, and Chris Rock.

Parsons’ first book, a new novel titled, How High the Moon (Little, Brown, and Company), will be released March 5th. The book is set in the Jim Crow South in Alcolu, South Carolina, and centers around three cousins, Ella, Henry, and, Myrna. The main character, Ella, is raised by her grandparents, because her mother is pursuing a career as a jazz singer in Boston and, she doesn’t know who her father is. She is also bullied for her light brown skin tone. Ella’s mother invites her to Boston for Christmas and her trip leads to some life-changing experiences. The cousins’ lives also change after Ella returns home just as her schoolmate, George has been arrested for the murder of two white girls.

On President’s Day, no, better yet, the birthdays of literary greats Toni Morrison and Audre Lorde, I talked to Parsons about her writing journey.

I read How High the Moon and loved it! What made you decide to write this book?

Well, my Mom is from Charleston, South Carolina and she grew up in the 40s. And she used to always talked about her happy childhood. I was looking at the time that she grew up and, it just seemed so strange to me that during the Jim Crow south she would always refer to it as so gleefully all the time. I didn’t set out to explore what would it be like as an 11-year-old girl, to grow up during that time. Instead, I mixed it up to what it would be like for me to grow up during back then, and, being biracial. My mother’s relationship with her father was shrouded in mystery. It’s different from the story, but the similarities are there. My mother’s mother lived in Boston while she lived with her grandparents.

Did you ask your mom a lot of questions about her childhood?

Oh yeah! But, here’s the thing. My parents don’t voluntarily talk about their past. You have to ask them. My husband’s parents are the exact opposite. He grew up knowing his background. He would ask my mom questions, and, I would find out all of these things about my mom that I never knew. It wasn’t that she wouldn’t tell me…I wasn’t asking the right questions.

Did you put any of the things she told you in, How High the Moon?

Yes. Much of the backdrop is from my mom growing up in a town called, Wando, that is similar to Alcolu in my novel. They had a farm with all these trees with fruits, animals, and, they grew so much crop. They were very self-sufficient. It was deeply segregated. She said they rarely saw white people in Wando. I think I put more white people in my book than she came across.

How long did it take you to write the book?

Ella goes through a lot. She deals with colorism, not knowing who her father is, trying to connect with her mom, and, the consequences from that.

Well, with her mom, those were developing as I was writing. The connection between Ella and her mother just came around and showed itself. The pen was telling the stories.

When you developed Ella’s story, did you use stuff that you went through because you’re biracial?

Yeah, definitely. What she goes through because of her background, yeah I went through it. But, the more I wrote her story, the lesser she was like me. She became this strong, fireball who jumps up and in your face. I was nothing like that. I’m an introvert (Laughs).

You were like, Henry. He was shy but grew into his own.

You also included a real-life person and his story in the novel. The character, George, is based on 14-year-old George Stinney, Jr. Why did you include his story in How High the Moon?

Well, years ago, I created Sweet Blackberry, which is a nonprofit organization, and, the mission is to tell unknown stories in Black history. The goal is to inspire children. In my research, I discovered George Stinney’s story and, it was always coming up, time and time again. And, it’s a horrifying story, and, it haunted me. I was telling people about the story, and, they’d never heard of him…which was really a shame because this boy’s life was unfairly cut short. I wanted people to know more about him, so his story came quickly in my writing. He lived in a town not unlike or far from where my mother grew up, around the same time. I fixed Ella’s age to blend with the time when everything took place. Originally, he was not a prominent character in the story, but a memory of someone Myrna met at some point without knowing about the incident. I was afraid to get too close to it. But I was talked into it, so I brought him into the circle of friends and include the trial and horrible execution in the book.

Did you talk to George’s family about your book?

Yes. I reached out to them and told them. I did not ask any additional questions. I got their blessing.

I noticed that you wrote his and Myrna’s story as a, ‘what if.’ It looked like George and Myrna was a blooming young love story.

Yeah, well, it’s hard to not look at George’s story and wonder about all of the, ‘what ifs.’ All of the things that he may have wanted to do in his life, who he would’ve become. He was a real person who had many tomorrows in front of him, harshly taken away. I wanted to explore that a little bit.

Ella and Myrna are strong characters. With Myrna, I saw a civil rights activist in her, even before George’s fate.

The injustices that happen all around them, especially with what happens to George, it starts to build up inside of them. It’s these incidents that will affect what they will do later in life.

Will there be a sequel or series?

I was glad to finish this. I was glad it was over (laughs). But, people are asking for a sequel!

How High the Moon is beautifully written by Parsons. The story will give readers the chance to dig deep into America’s past, that remains prominent in 2019.

You can pre-order How High the Moon on Amazon, Barnes & Noble and wherever books are sold.