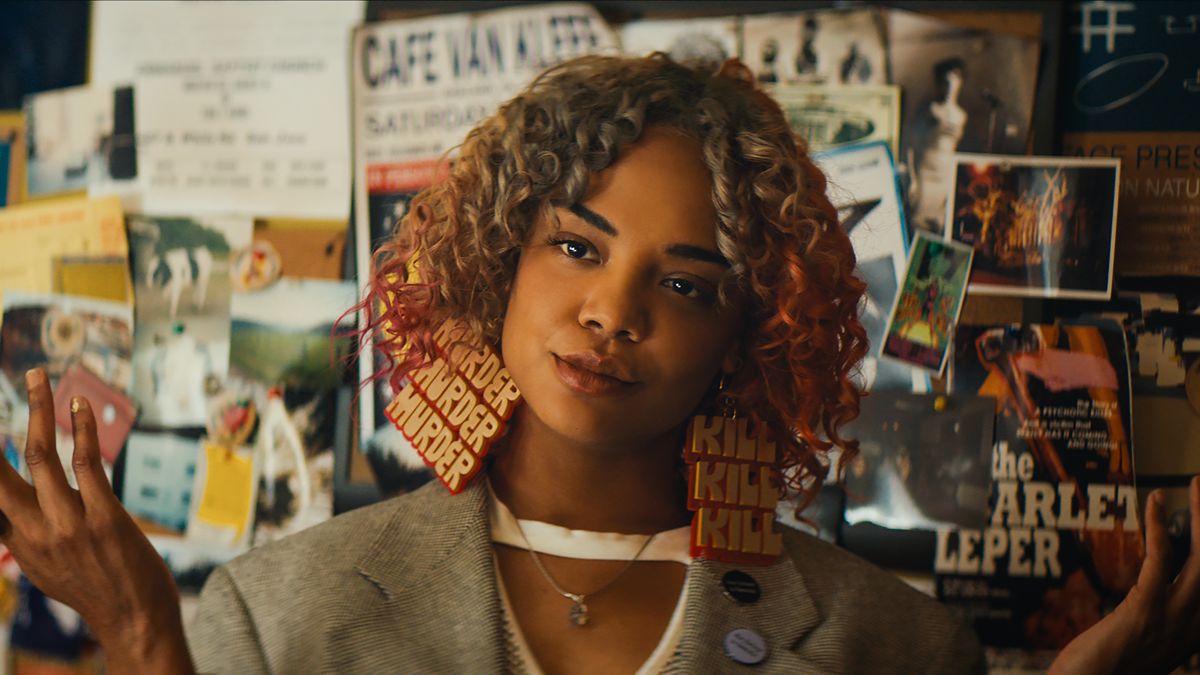 Boots Riley’s Sorry to Bother You is a surreal black fantasy film made for everyone. Costume designer Deirdra Elizabeth Govan’s talent, and Boots Riley’s vision came together to create memorable costumes for the characters in the film. One character whose style stands out from the rest is artist and activist, Detroit. She has colorful hair and isn’t afraid to play with patterns and textures. Her personality and demeanor would catch anyone’s attention but the big, bold earrings she wears are in a league of their own. 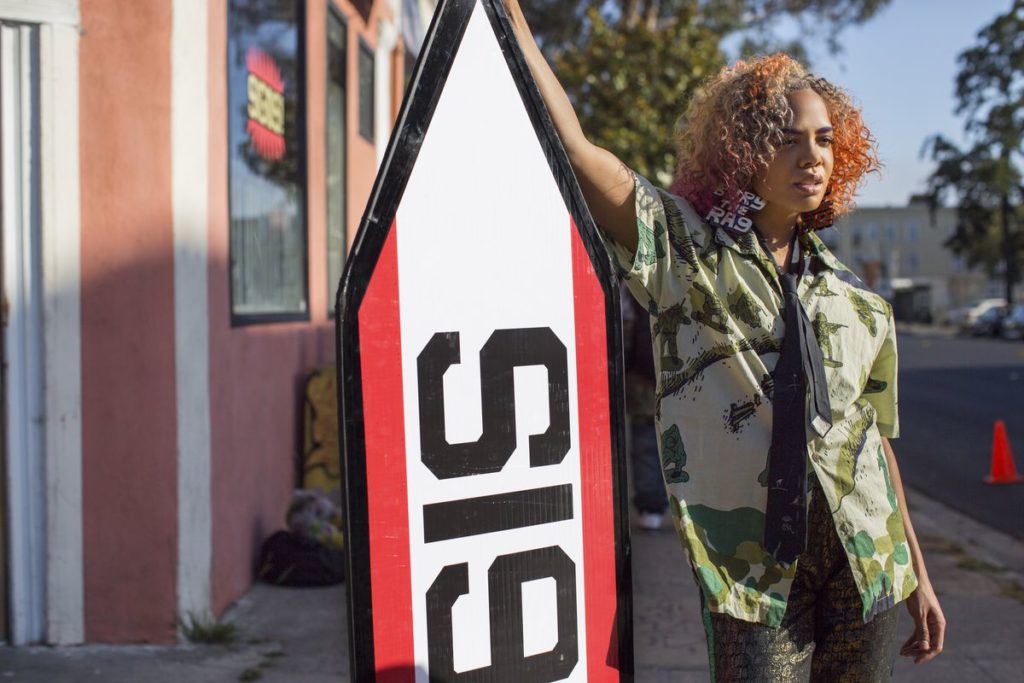 Yep, They Really Do Mean Something

Govan mentioned in an interview with Vogue that Boots Riley purposely included the earrings in the script, the inclusion of the earrings was not a decision made while trying to figure out costume designs.

During an interview with Vogue Riley talks about Detroit’s style, he said “[Detroit is] someone who is always trying to make a statement, she’s using every inch of her body, every inch of every wall around her, to talk about what’s going on.” Her outfits were strategically picked, not only to match her character but to match the scenes in which she was in. This goes for the choice of earrings she wore, as well as the clothing pieces.

Some Make a Social Statement

The first pair of earrings she wears are the “Murder, Murder, Murder/Kill, Kill, Kill” pair. She puts them on before she goes to work as a sign twirler on the street corner. This scene comes after viewers watch a WorryFree commercial and get a glimpse of the company for the first time. The earrings’ immediate appearance after the commercial works to amplify the film’s message that the WorryFree company is more than corrupt–it’s deadly for the people who sign up for it.

Detroit doesn’t wear her earrings all the time. When hanging out with her friends and her boyfriend Cash she keeps them at home. She also omits them when her outfit is already making a big statement, such as when she wears “The Future is Female Ejaculation” t-shirt. Wearing the earrings would take away from the message on the shirt. 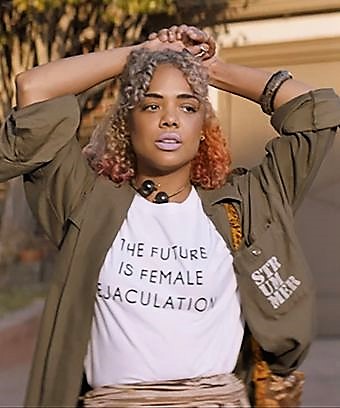 The next pair of earrings we see her wearing are the pink and purple glitter penis earrings. She wears them at the RegalView telemarketing office when she and her co-workers stand up against the company. The message the earrings are sending is pretty clear and appropriate for the scene. Detroit is telling RegalView and the management team to “suck it” without explicitly stating it. Again, she chooses to omit the earrings during the RegalView strike held outside the company’s office. The message of the protest, with the collective effort of the RegalView team, was already so strong on its own. The earrings weren’t needed.

Another pair that stood out was a gold-plated set of earrings that featured a guy strapped to an electric chair. After viewers are shown a close up of her earrings, the camera focuses on a WorryFree billboard of a guy sitting on a couch with a remote in hand with the following words “Show the World That You Are a Responsible Baby Daddy.” The earrings could be making a statement about WorryFree taking away the lives and freedom of the workers by making them slaves. By taking away their freedom, WorryFree is, in a way, killing those workers – like the man in the electric chair.

The man in the electric chair earrings could also be making a statement about the mass incarceration problem in the U.S. After all, WorryFree workers are prisoners, so it’s hard not make the connection to the U.S–a world leader in incarceration. The U.S spends about $182 billion dollars on mass incarceration a year. Let that sink in.

Along with being a screenwriter, director, and producer, Boot’s Riley is also a rapper, and he included a few song lyrics on Detroit’s earrings. The first pair of earrings we see her wearing featuring song lyrics are the “Bury the Rag/Deep in Your Face” pair that she wears to work. This line comes from the song “The Lonesome Death of Hattie Carroll” by Bob Dylan. The song is about a Black barmaid who was struck by a cane and killed by a rich farmer in 1963. The farmer was only sentenced to six months in jail.

This pair speaks to the racial violence that still lives on today and the justice that fails to be served for the victims.

The “Bury the Rag/Deep in Your Face” earrings also appear before Cash fails to pick up Detroit after work. Including these earrings seem to be Detroit’s way of saying “Forget You Cassius, save your apology for someone who cares.”

Detroit wears her next pair of lyrical earrings at her “The New F**k You” art gallery opening. At the gallery she wears earrings that say “You’re Gonna Have to Fight/Your Own Damn War” from Prince’s song “Party Up”. The song is a protest against war drafting. By wearing these earrings she is protesting against the concept of war.

The last time we see her rocking earrings is in the second to last scene where she and Cash are back in Cash’s uncle’s garage. The two seem happy about where things are now. That happiness disappears quickly when they realize that things are not as good as they thought they were. In this scene Detroit wears earrings that say “Bella Ciao”. Bella Ciao is the name of an Italian Folk Song and anti-fascist resistance song meaning “Goodbye beautiful”.

The song is about a man who leaves to go fight the Germans in WWII and ends up dying. Is she saying goodbye to Cassius, or is this just a clever way for Boots Riley to (almost) end the movie – by leaving us with a reminder of Nazi Germany?

I think it’s brilliant that Riley choose to include a character like her in his film. He’s promoting freedom of speech and the right for us all to speak up, stand up, and point out the injustices and issues in our world. Detroit’s character is beautiful and well thought out. Sorry to Bother You is an absolute must-see in all its afro-realness and Black magical realism. So, make sure to check it out when you have the chance.

Sorry to Bother You is in theaters everywhere.