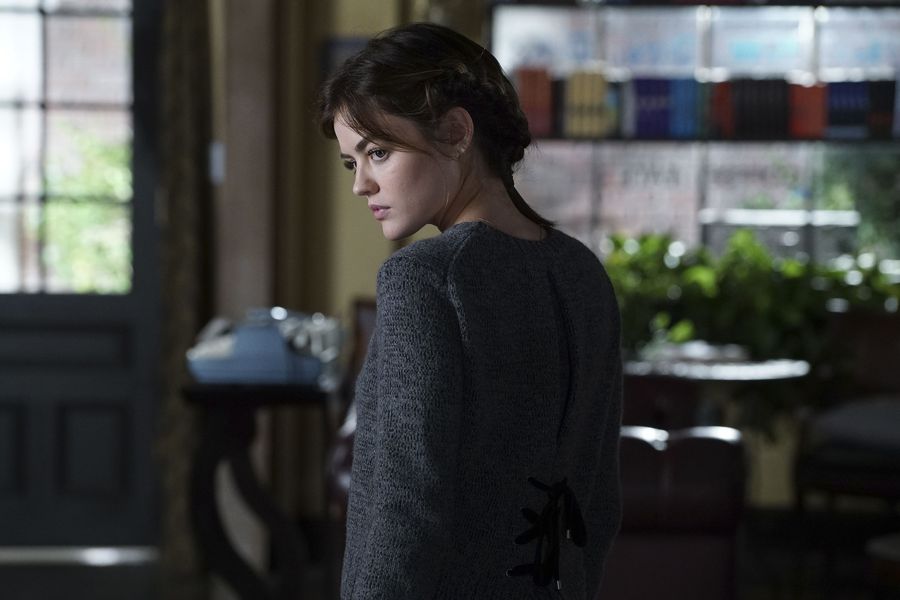 You know what would be a really good ending for Pretty Little Liars? It’s been twenty years or so, and the Liars reunite at the Brew, free from prison and out on parole. Just like there’s no way out for Aria after her alliance with A.D, there isn’t one for the Liars either. They did kill Archer Dunhill. Then they covered it up. If they go to jail tomorrow, there would be little injustice in it. A case can be made for Dunhill being the absolute worst, but at best they’d get some leniency in sentencing, not a free ride.

Thus, “Choose or Lose” plops the Liars into a race to the bottom, as A.D informs them they have 36 hours for one of them to take the fall or they all go down. You’d think literally slapping a timer onto the episode would make things feel a bit more urgent, but just like putting a countdown clock on the show as a whole (two more episodes to go), it doesn’t quite work out that way.

A.D is PLL’s Big Bad, so logistically you’d think the final season would be ramping up toward a collision with them. Instead, the creepy game is more or less a thing of the past (no one actually has turns anymore), and instead, the Liars are forced to contend with their lies. Namely, the really big one of Archer’s murder, as Lieutenant Tanner (replacing Detective Furey, which I am salty about) collects more and more evidence against them.

This scenario is actually a better one, at least metaphorically speaking. The only reason A has had any power is because the Liars give it to them. They lie so much the truth becomes poisonous, and A is particularly adept at turning their dishonesty against them. Spencer’s push and pull with Marco was entertaining but not enough to protect her, as the episode opens with search warrants being served and the girls’ homes being cleared out.

But since there’s really nothing to do about this, the Liars just do nothing. Emily and Alison have a romantic date at the kissing rock, Hanna and Caleb get married, Aria tells Ezra the entire truth (I think?), and Spencer and sad lumberjack Toby hook up. These are all important relationship beats. Aria needs to level with Ezra, Emily and Alison need to do something other than be tormented and kinda sad, Spencer and Toby need to have sex because that’s the way PLL works, and Hanna and Caleb, the only mostly functional relationship, are running out of time to tie the knot anyway. But none of these things are unexpected, more like things being checked off a list so, excepting Hanna and Caleb’s small nuptials, nothing really feels like much — even if they think it’s their last night of freedom.

Of course, they aren’t going to let any one person take the fall. But of course, the suggestions are put out there. Should it be Hanna, who was actually driving the car? Or Spencer, whose astronomical mistake is what got the cops back on their butts? Or maybe it should be Alison, who married Archer to begin with? Or perhaps Aria, finally outed as working with A.D.?

I’ll take this moment to note Emily’s pure as driven snow and register how incredulous I am that none of the Liars, angry and betrayed, don’t even suggest Aria take the fall on her own. (But I’m pettier than the Liars, I guess). I’m torn between wishing more had been done with this and just being glad it’s over. Having Mona turn up and simply tell the Liars Aria’s working with A.D is certainly anticlimactic, but PLL doesn’t have the time to do anything else.

Spencer tries to be semi-understanding. After all, she once threw her hat in with A, too. But unlike Aria, Spencer always had a plan. She never intended to ally with A for real. She wanted to find the missing Toby and learn who A was, but Aria never had that kind of clarity. We can only guess how long Aria would have let this go on or even how far she’d have taken it. Despite moments where it seemed she might try to turn the tables, it never really worked out that way, and I’m not 100% sure what Aria would have done if she’d actually met A.D. Would she have told the Liars who it was? Or would she just have enjoyed the fruits of her labor, like a video putting her out-of-state the night Dunhill died?

It doesn’t help matters that this was all for nothing anyway. For a minute it looks like Aria actually may have gotten something for this. Ezra hasn’t totally abandoned her), even if her friends have, and A.D seemingly cleared Aria of police suspicion. But her “unlimited freedom” isn’t all that, since it takes the form of Archer’s body in her trunk.

Thrilling Mysteries to Watch If You Love ‘Pretty Little Liars’