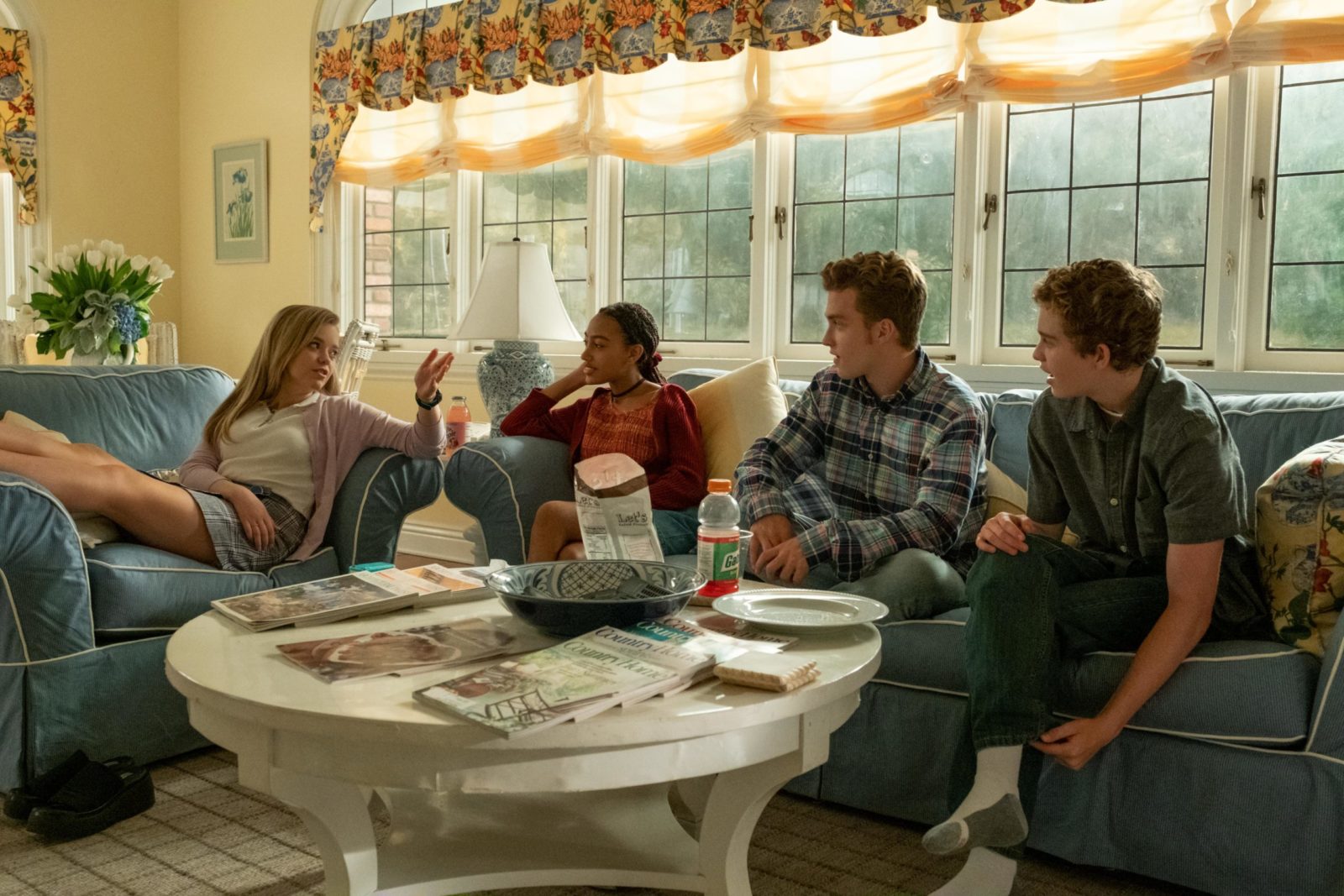 If you’re waiting for drinking age and no one would blink twice if you told them you hadn’t yet graduated high school, then you know where Lexi Underwood and co-star Jordan Elsass are in life.

Except, here’s the envy part. Hulu’s Little Fires Everywhere (based on the book by Celeste Ng) is their first big work project, their first series, and their first taste of Hollywood. For young actors that means suddenly getting invited to glam parties and premieres (well, before the coronavirus), photo layouts, cover shoots. Everyone celebrates the newbies.

In a gorgeous house located in the Hollywood hills, BGN caught up with the two young actors to chat about the show’s intricate plot, their exciting new experiences, how their lives have changed, and of course, working with Reese Witherspoon and Kerry Washington.

How many episodes are there?

So eight done and what’s the possibility of renewal?

Jordan Elsass: And it went on to Season 2, so you never know.

LU: It could go anywhere, but I would love for there to be a Season 2. I have some questions that I need to be answered.

LU: I have questions. Anyone who is familiar with the book, as soon as you are done reading it. You are like, ‘What happens next?’ And even how our show ends, it’s even more. There’s so many questions.

JE: There’s a lot of subplots that could be fleshed out. For example, between what happens in the future between Trip and Pearl.

Yes, the two of you have great chemistry on the series. Are you going through some of the same teenage issues in real life?

JE: I think so, to some degree.

LU: Even though it’s set in the 1990s and we’re not going through what our characters are going through, I think any teen, period, no matter what race you are, where you live, or what time period you’re in, can relate to the struggles of growing up in society and trying to desperately fit in, and the romantic aspects of it. Does he like me, does he like me not? I think everybody can relate to it.

JE: It’s cool seeing how even back in the ’90s everything was so wildly different in every way imaginable but yet it’s still the same struggles because we are all human and, if this is accurate — which it is — then [teenagers] went through the exact same kind of stuff.

Anything that specifically happens to your characters that is similar to what you are going through now?

LU: What I thought was brilliant was the first time I read Episode 1. The first time you see me as Pearl, it’s with the exchange with the police. I thought it was absolutely incredible to have that aspect in there because we’re also talking about police brutality and how that has always been around but it’s super relevant right now. Everybody wants to talk about it right now but this has been happening and it’s been a problem.

So I feel like a lot of black people in America can look at that and say, “Yeah I can relate to that,” because at that young age, you do have to have that talk with your daughters and with your sons, and especially because in the book you don’t know what race Pearl is. For that to be the first time you see them is absolutely powerful.

JE: I think that throughout the series, Trip starts to find his true identity and who he really is. I think I struggled with that growing up and finding out who I really was and that I was more than this label that people put on me from a distance.

You two had the scripts and read the book. Was there anything specifically weird about the times, the ’90s versus the 2000s?

LU: It was definitely a culture shock for us because they were using pagers and like, were you [to Jordan Elsass] a ’90s baby?

JE: No. I had never seen a pager. I had no idea. I would watch old movies and see somebody whip one of them out. I had no idea what it was and then I finally had one in my hands and I was like, “Whhhaat is this? What is going on?”

LU: That was the weirdest thing, having to deal with all the ’90s accessories.

JE: The clothes were wildly different from anything you see today.

LU: I love the wardrobe though. Our wardrobe was awesome.

How have your lives changed since you did the show?

JE: I got a decent car. I was very excited. Since I was about three years old cars have been my passion so I got a decent car. But in terms of changes in my lifestyle, I’ve just been traveling a lot, way more than what I am used to. Don’t get me wrong, I love traveling, being on the road and on the move, but I would say that’s the biggest change.

LU: I think the biggest change for me has just been people knowing me and just the experiences that I get to have. One of the cool things that I did recently, I went to the Essence Black Women in Hollywood brunch with Kerry. That was such an incredible experience for me because I never would have even dreamed to be in that position.

I’m a girl from like the small side of Washington, DC, and for me to even just be here and to get into those rooms, I’m still pinching myself.

JE: Everything since a year ago has just sped up so much and changed so drastically, it’s almost unbelievable. Like I can’t even remember what last year was like and my lifestyle feels so wildly different.

What was it like working with Kerry Washington and Reese Witherspoon?

LU: Just the journey of creating Little Fires Everywhere was magical. Just being with two icons like Kerry and Reese—I am only sixteen—just to say that I got the experience to work with them at such a young age is mind-blowing. To have that experience is truly a blessing.

Everyone on set was so kind and we all bonded over those, what [to Jordan Elsass] like six months?

JE: Oh yeah, it was awesome.