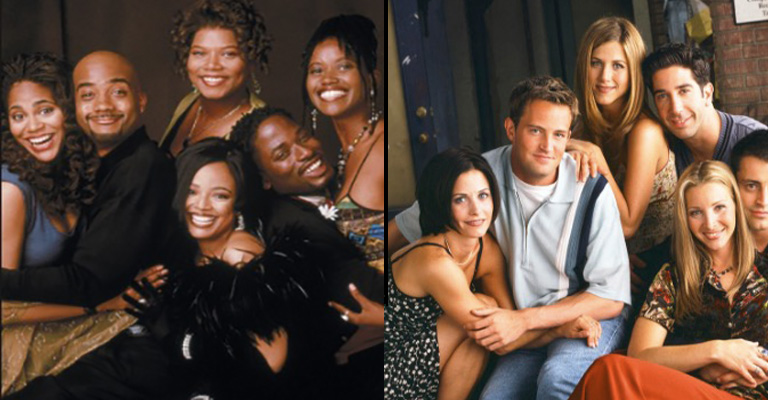 Or that’s how I compartmentalize it in my head. I’ve never had a problem with Friends. I’ve watched and enjoyed it on occasion. However, Living Single was such an integral part of my development that it’s not even fair to compare them. But I’ll try anyway.

We’ve all heard the story of how the creators of Friends were so “inspired” by Living Single that they came up with a similar version of the show just a year later. It can be argued that there are quite a few similarities between the characters. I want to not only address them but argue why the Living Single characters are better in every way.

Similarities: They’re both fashion-obsessed “girly-girls” who will spend every last penny on clothes. They both had perennial man problems (Rachel/Ross, Regine was forever looking for a rich husband) and both held professions as buyers for clothing boutiques.

Smackdown: Yes “The Rachel” set the hair salons in America on fire, but one iconic haircut can’t outclass a wig for every occasion. Regine Hunter created looks, ma’am.

Similarities: Both are less…intellectual than the rest of their friends, and are usually the first person to have something off-the-wall to say that has nothing to do with the present situation. They’re also susceptible to manipulation, which typically leads them to end up as the center of whatever shenanigans are going on.

Smackdown: Joey was an actor and a ladies man, but Overton was the cuddliest, most clueless teddy bear that you ever did see! Plus, he’ll put your bedroom door back on its hinges if you ask him to.

Similarities: Both of these characters are partially defined by their careers in successful, high-paying jobs. Chandler holds jobs in IT and later, advertising. Kyle is a stockbroker who likes to flaunt his wealth to others. Chandler is more humble but also thinks money can fix everything. Both men have a tendency for over-the-top sarcasm and a deadpan demeanor.

Smackdown: Now, in real life, Kyle would be horrified to be paired with the likes of Chandler. Kyle has no problems attracting the ladies. And, could you imagine this velvety voice coming out of Chandler’s mouth? It’s no comparison.

Similarities: They are both the “mother-hen” of their groups. Both women are very ambitious and have creative jobs that require them to be leaders. They are both very competitive as witnessed through Khadijah’s love of basketball and Monica’s ridiculous aggressiveness in practically every sport she plays.

Smackdown: The Queen vs. Monica Geller? No offense to Monica but, Khadijah had it going on in every aspect of her life. She was beautiful, smart, strong and successful, while Monica was often a neurotic mess. She also had that whole magazine office running like a well-oiled machine while Monica was…a chef (was she head chef??). Finally, at the end of their respective series, Monica married Chandler while Khadijah ended up with…Black Lightning. No further discussion needed.

Similarities: Even though the two characters are of different genders, they are both well-educated and successful in their respective career. Maxine is an attorney and Ross is a professor at NYU. Also, both are involved in an on-off relationship with one of the other characters. The back-and-forth banter between the couples about their relationship always takes center stage in any scenes they have together. Ross and Rachel always joked about being “on a break”. Maxine and Kyle would always joke about their sex life and the other person’s lack thereof. Of course, the arguing and sniping is nothing but thinly veiled unresolved sexual attraction. Of course, everyone knows it but them.

Smackdown: Have you seen the show? Maxine is funny! She is famous for her acerbic barbs and Kyle always gave as good as he got. She was also confident and sexy, not a passive aggressive sad sack. Overall, Max and Kyle come across the more compatible pair. With all of the secret liaisons and sneaking around, their storyline was a great deal more exciting.

Similarities: These characters are sweet, naïve and ditzy, true cloud cuckoo landers. They’re both free spirits who are very loyal to their friends. Their sense of style tends toward the unusual at times, but both ladies are friendly, approachable people.

Smackdown: These two are the most alike out of the group, which makes this a bit more difficult. However, I’ll just say that the one-two punch of Overton and Synclair together was electric, even before they officially got together. They both talk in a language only they understand, and we love them for it.

Tripp or Marcel the Monkey

Similarities:  Both seem to be ideas for a sweeps storyline that just got forgotten halfway through the season. Eventually, some writer figured out there was an extra character in the scripts and the character leaves for some odd reason.

Smackdown: Alright, I’ll give Friends this one. The monkey is cuter than Tripp, and more essential to the cast.