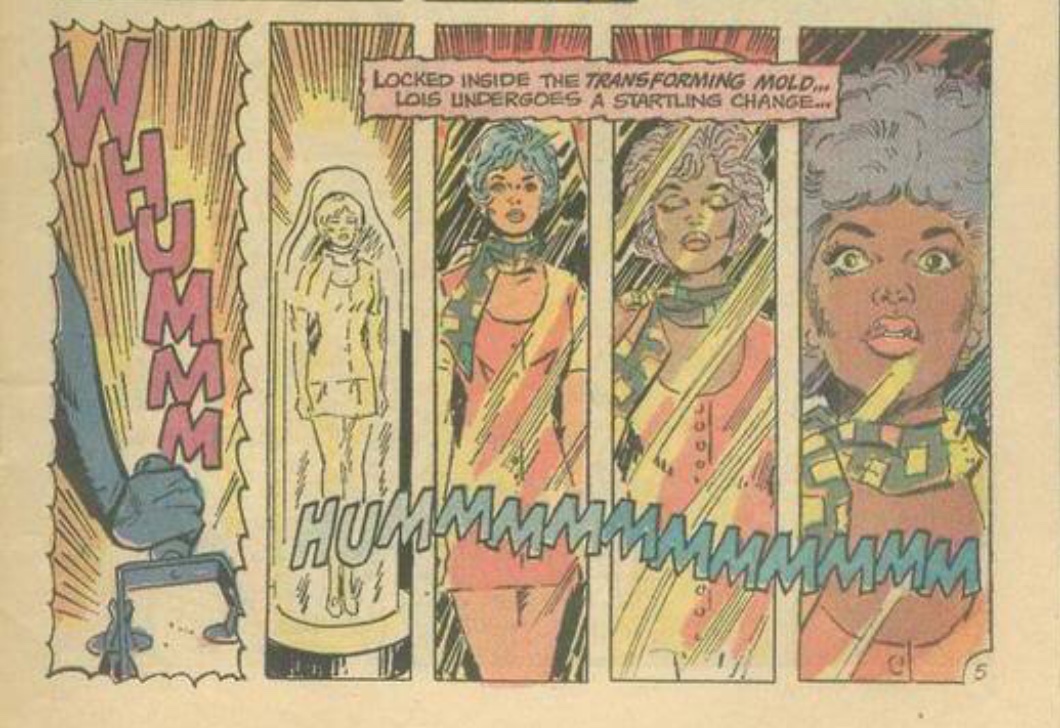 I love when comics attempt to be progressive. What I love even more is when comic writers do it well, which was rarely the case in the early ages of comics. During the Silver Age (1956-1970), writers were more attentive to societal issues in an attempt to be relatable to new audiences. In November 1970, DC Comics attempted to bridge the racial gap with its release of ‘Superman’s Girlfriend Lois Lane #106’ titled, “I am (Curious Black)!” Writer Robert Kanigher, a White man, presumed this comic would help ease some racial tensions, but in my opinion, it does quite the opposite. Lois Lane’s transformation into a Black woman — yes, you read that correctly — stinks of racism and cultural appropriation; in the end the comic ultimately reinforces the idea that Black people are dependent upon Whites.

“It’s important that I live the next 24 hours as a Black woman!” Sorry, but you can’t understand racism in a day!

In this comic (which you can find here on AFROPUNK), Lois Lane embarks on a trek into Metropolis’ “Little Africa” to get information from its residents for a story she’s writing. She’s excited about her story and brags about how she “should win the Pulitzer Prize for getting the ‘nitty gritty.’” She hails a cab and is dropped off in the ghetto with full confidence that she’ll get all the information she needs to write her story, but to her surprise no one wants to talk a White woman. Kids and adults turn their backs on her and slam their doors in her face. In fact, the only person who says a word to her is an old blind lady, who is obviously unaware of her complexion.

A defeated Lois hears a Black man, Dave Stevens, condemning Whites for their continued discrimination against Blacks. He says, “Never forget, she’s whitey! She’ll lets us shine her shoes and clean her floors… but won’t let us into her lily-white schools!” *Cue White tears from Ms. Lane*

She’s hurt by this because, “he’s wrong about her, but right about so many others.” I understand why Kanigher thought this was a good idea; his intent was to use Lois as a vessel to show how White people can understand racism. I get it, but unfortunately being ignored for a few hours is a heck of a lot different from being treated as sub-equal for your entire life! So, nice try, but no.

Superman swoops down to find Lois in the park and carries her to his Fortress of Solitude, where she tucks her White body into the Plastimold machine. Lois then pops out of the machine several shades darker, her straight raven-colored bob transformed into a curly brown Afro. She decides to retire her business skirt and blazer for an African-inspired outfit. She hails a taxi for the second time, but it zooms right past her! She says, “The color of my money isn’t good enough…I’ve learned my first lesson in the meaning of Black!”

rewind: “I’ve learned my first lesson in the meaning of Black!”

I had to re-read that a few times when I first read this story because I MUST have misread that! The diction in that statement is problematic because the Black experience isn’t something that can be replicated. All Black people — dark-skinned, light-skinned, male or female, straight or gay — have different experiences with racism and prejudice. It’s quite insulting Lois’ short time as a “Black” woman can be representative of the struggles of all Black people.

Lois Lane “Swagger Jacks” Us, then Saves Us

Lois Lane’s transformation mirrors the appropriation of Black culture we see today, especially in the music world. We’ve seen Miley Cyrus wearing grills and twerking with Black chicks in her music video for “We Can’t Stop.” The article titled, ‘Is it Fair to Say Miley is White Again?”, explores how Miley has recently shed her pseudo-Blackness to return to her innocent roots. Only White people have the luxury of doing what Mama Pope from Scandal calls “swagger jacking.”  Both Miley and Ms. Lane get a glimpse of Black culture, earn their “black cards,” and dispose of them when it’s no longer needed to gain popularity or get useful information, respectively. They can then be welcomed back in open arms by the White community as if their wannabe Black phases never existed. Miley reconciles with her beau, Liam Hemsworth, and Lois remains Superman’s lover. It’s important to note, however, a White person can only be welcomed back if she’s completely rid herself of all that Black tomfoolery; pay close attention to Superman’s roundabout answer as to why he can’t marry Lois if she remained a Black woman (see below).

The final scenes are troubling. Lois runs into Dave Stevens again who now interacts with her because she’s Black. They hear ruckus coming from an alleyway and find a group of White gangsters selling drugs to Black teenagers. Dave lambasts them for selling his fellow brothers their “poison.” A fight ensues and a bullet strikes Dave, which puts him in the hospital. He’s lost so much blood that he needs a transfusion and Lois decides to be the one to donate her blood. He survives only because of her. This trope, the White Savior Complex, gives rise to the false notion that despite the proven resilience and perseverance of Black people, we still need a White person to save us at the end of the day. But, are we being saved or are we being made to be dependent? It’s the latter — the oppressed are helpless.

Superman returns and Lois turns back into a White woman; she fears Dave will no longer speak to her. Superman quells her fears saying, “If he still hates you with your blood in his veins… there may never be peace in this world!” This line is particularly worrisome because it points to the fact that African Americans have White blood in their veins as a result of the countless rapes of Black women during slavery. Are we supposed to be grateful that we have White blood? We didn’t ask for it and neither did Dave; he’s placed in a position where he has to somehow be grateful and appreciative of something that was forced upon him. Black people are trapped in a cycle of perceived freedom and forced dependence.

The main goal of this comic was to be relatable, but too many instances highlight Lois’ ignorance. She can’t fully recognize the privilege she has. She and other White women have the privilege to “act Black” for a short frame of time, while Blacks who “sound White” get shamed for it or are condescendingly praised for their eloquence. Part of being privileged is to be unable to see you have been afforded it. This comic may be progressive for the fact it focused on Black culture during the 70s, but its misrepresentation of Black culture causes it to fall short in its attempt to be revolutionary.

Author Bio: Ayana, a BGN intern, is a makeup-obsessed geeky Black girl. She’s passionate about racial issues, comics, and prides herself on being a strong Black woman. She aspires to get her Masters degree in Journalism and when she’s not writing, she’s watching any show, a slice of pepperoni pizza in hand, featuring a black female lead. When she’s not eating, she’s drooling over kitten photos on the web!