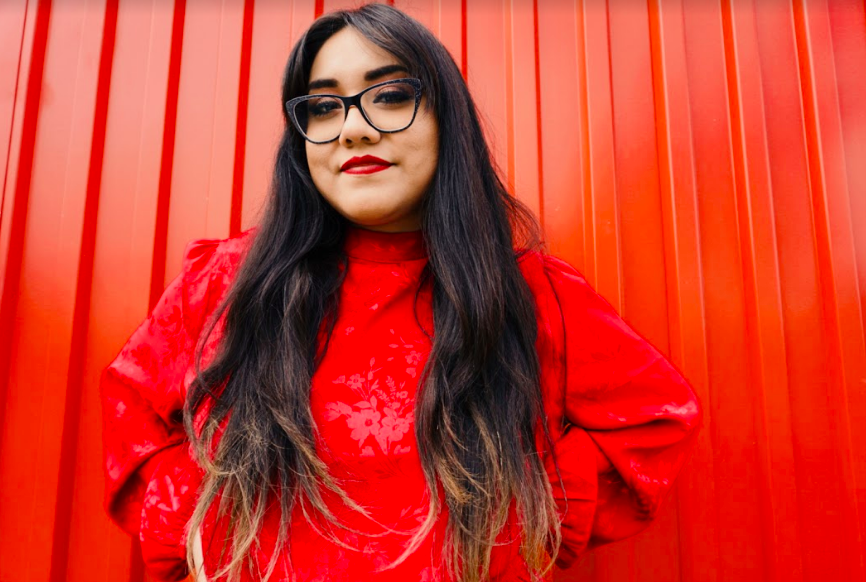 Gloria Lucas is a powerhouse of body positivity and the founder of Nalgona Body Positivity Pride. She leads workshops and speaks on fatphobia and social justice while dismantling diet culture and encouraging people of color to love our bodies unconditionally without shame. Here’s a taste of BGN’s conversation with Gloria Lucas.

Why were you called to create Nalgona Positivity Pride?

Nalgona Positivity Pride came out of my own personal story as a young woman of color struggling for many years with an eating disorder without the language or representation to talk about it. I ultimately was feeling very isolated. There wasn’t even a lot of mention of fatphobia or weight stigma. I had to find a way to educate myself. I learned about post traumatic slave syndrome through Dr. Joy DeGruy, and I learned about historical trauma through Dr. Maria Yellow Horse Brave Heart. I just started connecting the dots. All that self-study led me to create a community of people who have the same interests. It spoke so clearly to me that I started doing public speaking on historical trauma and eating disorders.

What does Nalgona mean?

Nalgona in Spanish is slang, similar to bootylicious. A friend of mine said to me, “Oh it’s because we are Nalgona positive.” I don’t think I will ever change it because it’s been the middle ground for lots of people to come to the table. Spanish speakers have just been like, “That’s funny. It sounds familiar, I could relate to it.” And then we start having tough, deeper conversations.

I love it! You mentioned weight stigma earlier. What does that mean?

Weight stigma is all of the discrimination, inequalities, and shame that people in larger bodies experience. We’re looking at the hatred towards fat people or hatred towards fatness in general. That correlates with weight stigma, and it’s very unfortunate because it’s one of the issues that is least checked. It’s acceptable to be hyper-vigilant over other people’s weight. It’s acceptable for people to go through extreme measures to lose weight, as much as surgeries. This is not to shame individuals who go that route. At the same time, culture has a “thin obsession,” getting to a smaller body by any means necessary. People are pushed to that extreme because it’s proven that people with larger bodies get paid less and it’s less likely for them to get hired. The amount of shame that they receive in the medical world when seeking treatment — you’re less likely to be diagnosed with an eating disorder. Weight stigma is normalized.

Why should diet culture be dismantled?

Our ancestors did not grasp the idea of diet culture. It comes with white supremacy. If we look at white supremacy, we look at diet culture and we look at religion. The foundation is the same — purity, punishment, and perfectionism. I feel our ancestors were like, “You got food, great!” There was no need to manage weight. Diet culture is a facade. It’s saying the best thing for you is to strive for health without questioning who is defining health. Does everyone have equal access? It’s a very unrealistic expectation for people to abide with this idea of wellness.

Do you think that some of these wellness gurus are doing more harm than good?

I would ask, “What does health mean to them?” Ultimately, we all have a role in how we address health within communities. What does it matter if you get to juice every day and you’re doing X amount of body movement, if you don’t even have clean water because of environmental racism? Or the fact that there’s high rates of missing and murdered indigenous women? What’s the point of juicing? There have been studies where they put pop-up vegetable and fruit markets into low income neighborhoods, and there really isn’t an improvement in health outcomes because a lot of health inequities are based on stress that is based on structural racism. My question to them is, “Besides teaching individuals how to improve their lifestyle, what else are you doing for communities that are left out of the equation?”  There are wellness people who do look at the larger picture and are very critical, and that’s who we need more of.

When I attended your white supremacy, religion, and eating disorders panel discussion on Zoom, a woman said this in the chat, “The Church still blames one woman’s choosing to eat for all humanities woes.” That really stuck with me. What influence do white supremacy and religion play in diminishing  body positivity?

If we look at diet culture and wellness, there’s this idea of “purity,” of becoming a better version of yourself, because who you are right now is tainted. When we look at some religions, there’s a lot of restriction and shame. You’ve got to control your body; your body’s sinful. It’s kind of the same with diet culture. The food restriction, the cleansing, the detoxes. Then look at the church, that they do it in a different way. You go and tell all your sins, or you do a sacrifice for God like the Catholic Church. I think that there’s such a correlation. Ultimately, if we look at all of these things white supremacy and religion do, ultimately, it’s removing one’s autonomy and informing people that they need to continue transforming because where they’re at is impure or it’s not good enough. If you have religion, you have diet culture and you’re always comparing yourself with this white supremacist standard. Are you ever going to truly become the powerful being that we all need to be in order for things to get better?

I feel that body positivity was a good start for a lot of us. I think it’s more of a body liberation. It feels like it stops because it just gives us ideas you just have to be at peace with your body. If you’re not, it’s because you’re not doing this and that. It’s difficult for Black folks to live at peace in their bodies when there is high rates of police brutality just simply by skin color. It’s hard for Brown children to learn to see themselves as healthy, strong people in the correct embodiment when they see Brown children that look like them locked up in cages. It’s difficult for Indigenous women to see their potential, all their sacredness and power, when it’s constantly killed out of them. If body positivity is not addressing all of that, then it’s not enough.

How does body liberation bring us closer to joy?

Body Positivity gives language to what I’m feeling and experiencing  and brings forward this collective “Oh, we’ve all been struggling with our body image, the relationship to how we view ourselves. That’s been very powerful. I’m moving away from this. Ta da!” type of portrayal of myself. I used to struggle to not hate myself, and now I don’t. The Nalgona community is a big part of my joy.  A powerful outcome of folks striving for body liberation is that you get to build a strong community where you don’t have to feel so alone. A lot of people are able to get to a better place with their bodies as is.

Nalgona Body Positivity Pride (IG @nalgonabodypositivitypride) has co-created Sage and Spoon, a free peer support group for Black folx 18+ of all gender identities, expressions, and sizes who are struggling with their relationship with body image and food. The group is led by licensed therapist Alisha McCullough (IG @blackandembodied) the last Tuesday of every month at 8:00pm EST.