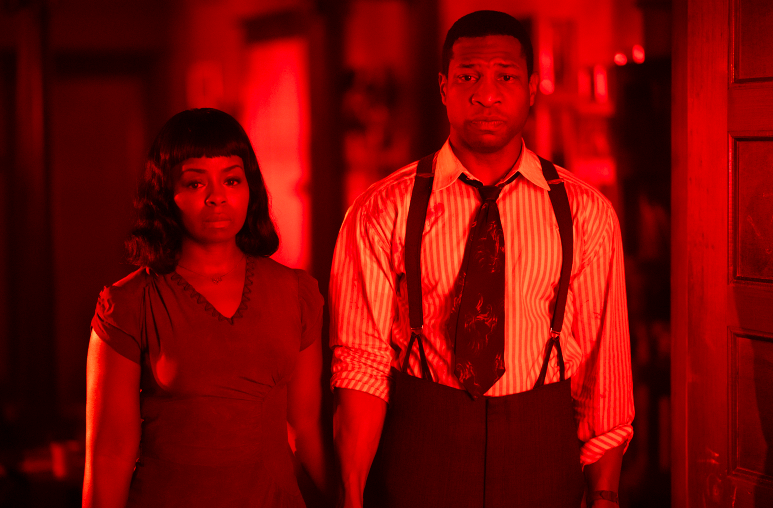 Every life has a purpose and Lovecraft Country proved that in its season-one finale Sunday night. Titled “Full Circle,” the episode answered a lot of questions while also creating the ultimate one – is Tic (Jonathan Majors) really dead. We’ll get back to that. But first, let’s unpack the installment and figure out what we know.

“Full Circle” opens with Tic, Leti (Jurnee Smollett), Montrose (Michael Kenneth Williams) and Hippolyta (Aunjanue Ellis) carrying Diana (Jada Harris) into her family’s apartment. The temporary reversal spell Christina (Abbey Lee) placed on her has worn off and everyone has to work quickly to save Diana’s life. Just as Tic opens the Book of Names, however, the plan falls apart because the book causes Tic and Leti to pass out. They are transported to an ancestral plane where Hattie (Regina Taylor) communicates with Leti and Hanna (Joaquina Kalukango) talks to Tic. Just before the show’s title card appears, Hanna tells Tic the answer is in his blood. Hmmm.

After that, Hattie tells Leti that Hanna took her own life because the Book of Names and its magic confused and frightened her. But Hanna did manage to open the book and create a birthmark that protects her family. She also bound the book so it wouldn’t harm anyone else. But, as Hattie points out, now Leti can use the book to help her family. And Hanna takes that message one step further and says that Tic can use the book and his power to “save them all.” We later learn that means all Black people. Tic also gets to spend time with his late mother, Dora (Erica Tazel), who tells him it’s normal to be afraid of death but his death will mean so much more. Which begs the question, what did Tic’s mom die from again? Dora also tells Tic that he has the best parts of Montrose and George (Courtney B. Vance). But which one is his dad? Oh, never mind. Leti and Tic then join Hanna, Hattie and Dora and they save Diana from the curse but they can’t save her arm. Dang. So Diana is the mysterious woman with the robotic arm from the future who handed Tic the book and pushed him back through the portal, a revelation that is confirmed by episode’s end.

Leti and Tic return to reality and thanks to Hanna, Hattie and Dora, they know what they have to do. Tic tells Montrose that all their hard work could save his life but Leti knows that’s not true. Still they press forward and hold on to the book even after they have to fight the racist ghost of Titus, take a piece of his flesh in a ritual, and tell Christina she can’t have the book. To spite them for denying her the Book of Names, Christina takes back her invulnerability spell from Leti. Or maybe she just puts it on pause. That part is unclear.

What’s is clear is that Diana is mad at her mother for abandoning her and leaving her vulnerable to the racist magical cops and Topsy (Kaelynn Gobert-Harris) and Bopsy (Bianca Brewton). Hippolyta apologizes and says she is Orithyia Blue but Diana is still fuming. Things improve between the two when Hippolyta shows Diana an official copy of her comic book and her lab where she can give Diana the robotic arm she needs. The other gift? Leti has new Black neighbors.

Meanwhile, Leti and Tic are looking for reinforcements. They get Tic baptized at church but they also turn to Ruby (Wunmi Mosaku) and Ji-Ah (Jamie Chung). At first Ruby curses out Leti at their mom’s gravesite for asking for help but later appears to have a change of heart after talking to Christina. Ji-Ah, on the other hand, came to Chicago to help Tic and try and save his life so of course she says yes.

The gang pack up and head for Ardham and up pops Ruby ready to ride along. Everything seems relatively swell on the drive and in the episode’s only scene of joy, Diana starts singing the Coasters’ “Sh-Boom (Life Could Be a Dream),” causing Hippoylta, Ruby and Ji-Ah to sing along. But things really get groovy when Tic joins in, causing laughter and happiness throughout the car. Even cranky old Montrose relents and sings along. There’s just one problem, as a few fans pointed out on Twitter, Ruby hates this song and her willingness to sing along is the first tipoff that this is not the real Ruby. Wow.

Tic and company arrive in Ardham and waste no time getting ready for war. Tic eats that cold ghost flesh and drinks what he thinks is Christina’s potion with her blood. Montrose, feeling sorry for his son, gives Tic a swig from his flask. Montrose starts sprinkling salt on the ground and Tic heads to the altar to be sacrificed. A bunch of white people scoop him up and the whole vibe is too similar to a lynching for comfort. Leti and Ruby are going over the spell they need and Christina reveals that Ruby is dead and she’s using her body. The two start to fight to the death all while Hippolyta, Ji-Ah and Montrose fight the white townspeople on the covered bridge. Hippoyta even gets to use some of her Dahomey Warrior moves. The fighting escalates and the Christina version of Ruby throws Leti out of the tower and she appears to die.

The townspeople overpower Hippolyta, Montrose and Ji-Ah and take them to the ritual site too. Diana is still in the car, reading what appears to be grown-up Baby George’s Lovecraft Country book, but is quickly attacked by a white Shoggoth. Thankfully, Tic’s black Shoggoth arrives and defeats the white Shoggoth and Diana is safe. We later learn in a montage shown when Ji-Ah uses her powers to bind Tic and Christina, that Tic introduced Diana to the Shoggoth so that it could protect her. Such an awesome big cousin.

Sadly, no one can protect poor Tic and Christina wastes no time cutting his arms and showering in his blood. Then she extracts what appears to be his soul. The similarities to Jesus dying on the cross are equally unnerving. As he slowly dies, Leti awakes and has the invulnerability mark on her again. Sigh. There is a scene in the montage where it seems like Christina gave Leti back the mark but it’s debatable. Maybe the ancestors did it or maybe Baby George? Either way, Leti is very much alive and gets to the altar just in time to tell Tic she loves him before he perishes.

Leti stabs Christina to bind her magic but a cocky Christina tells Leti her spell won’t work because she’s immortal now and that potion she gave Tic didn’t actually contain any of her blood. But Ji-Ah realizes her purpose in that moment and steps up to use her Kumiho powers to bind Tic and Christina together while Leti recites her spell, which most certainly works now. Maybe Christina should’ve gotten to know Ji-Ah better because she never saw her coming. The townspeople scatter like roaches and what’s left of the Braithewhite home further crumbles. While all of this is happening, that aforementioned montage also shows Christina catching Ruby trying to steal her potion, Christina hooking up a deceased Ruby to a machine so she can steal her likeness and Tic getting baptized. We also see Tic hand Hippolyta a letter from him to Montrose explaining his inevitable death and Christina as Ruby saying a little spell that appears to bring Leti back to life. Or, did she reactivate the invulnerability spell? Only the writers know. What we do know is that Leti’s spell has stripped white people of magic worldwide. That’s what Hanna meant by “save them all.”

But we don’t know for sure that Tic is really dead or if the magic that Leti now has can bring him back to life. For Montrose’s sake, it would be nice if Tic can come back because he seems truly broken from all the loss he’s suffered in his life. Perhaps the one bright spot will be his grandson George who Montrose will be able to raise and shower with love the way he couldn’t with Tic. So sad.

Diana, on the other hand, seems to have it all figured out. And when we see her turn into a cold-blooded killer and use her robotic arm to murder a magic free Christina for good, it’s clear that Diana, with that black Shoggoth by her side, will never be sweet again. If there is a second season, Diana, Leti, Hippolyta and Ji-Ah would give us more than enough of a story to follow. Until then, Rest In Peace Tic and Ruby. You will be missed as much as this show is on the Sunday nights to come.