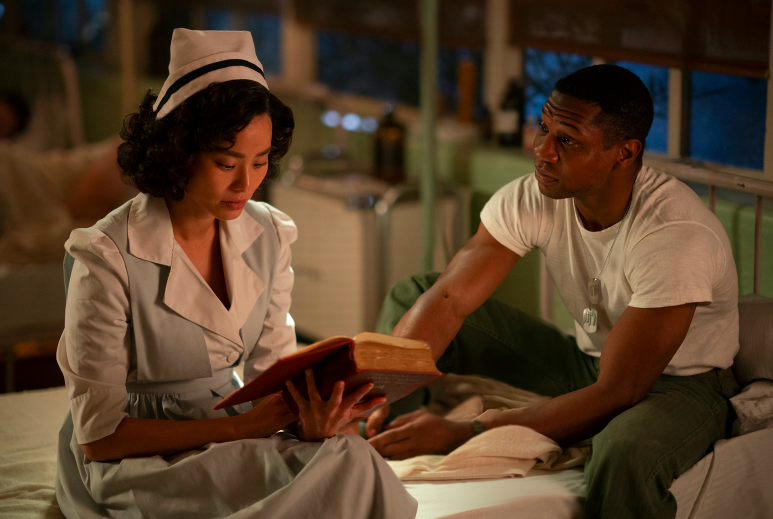 For an episode that didn’t include Atticus (Jonathan Majors) for the first 30 minutes and only a glimpse of Leti (Jurnee Smollett) the latest installment of Lovecraft Country, titled “Meet Me in Daegu,” was beyond riveting. That’s because the episode, told as a flashback, dug into Ji-Ah’s (Jamie Chung) backstory and her eventual romance with our guy Tic.

The drama opened with Ji-Ah watching the Judy Garland musical Meet Me In St. Louis at a nearly empty South Korean movie theater – save for a man and woman who made out and left. Ji-Ah was so into the flick that she even got up and danced a little. And then, before the title card dropped, the camera cut to Ji-Ah’s watchful eyes, and they almost looked like the eyes of a spider. Weird.

Later, we learn that Ji-Ah isn’t a spider woman but a Kumiho, a nine-tailed fox spirit that avenges men’s wrongdoings. But more on that later. It’s the fall of 1949, some nine months or so before the start of the Korean War, and Ji-Ah is seen walking around at home talking to her Umma or mom (Cindy Chang). Umma made Kimchi and Ji-Ah tasted it and commented about the pumpkin broth substitute her Umma tried out.

The conversation, all in subtitles, was lightweight until Umma started pressuring Ji-Ah to bring home more men. That’s was odd, right? But later, after Ji-Ah went to class at nursing school and then a Mee-Ting (an old school Korean speed dating affair), it seemed like Ji-Ah needed to get married to make her mom happy. The latter made the rejections she suffered at the hands of suitors at the Mee-Ting all the more unbearable. But nope. Sis had to bed a dude and kill him with her crazy foxtail things coming out of all – and we mean all – of her orifices during sexual climax. The first dude we see her kill in the act is a stranger (James Kyson, Heroes) from a bar, who thought he’d hit the jackpot until, well he didn’t.

There were a couple of fascinating aspects about the killing. One, Ji-Ah tapped into his memories, all of which were good ones. And two, Ji-Ah was giving us major Bilquis (Yetide Badaki) vibes from American Gods. Instead of killing her lovers and absorbing them into her vagina like Bilquis, Ji-Ah squeezed them until they exploded. Eww. The fact that she had to keep killing and then cleaning all that blood off her walls was just too much to fathom. Oh, and after she killed old dude, her Umma came in and was like, “You need to kill 10 more.” That’s a lot of sex and a lot of blood.

But that’s Ji-Ah’s cross to bear as a Kumiho. She has to kill 100 men and then, according to the rules of summoning such a beast, the original Ji-Ah can return. What is sadder and grosser still was that we learn Umma conjured this beastly avenger of wrongs because Ji-Ah’s stepdad had raped Ji-Ah. When Umma found out, she let a monster takeover Ji-Ah’s body and had the Kumiho inside her daughter kill that rapist first. He had preyed on Umma, who was a single mother, and Ji-Ah and deserved to die but all the other guys? We don’t know.

This of course created a very lonely existence for poor Ji-Ah and her only friend was a fellow nursing student named Young-Ja (Prisca Kim). In fact, at the Meet-Ting it seemed like Young-Ja was flirting with Ji-Ah a little. Later, when Young-Ja is exposed as a communist spy, Ji-Ah watches in horror as Tic and his fellow American soldiers shoot and kill several of their nursing coworkers/friends to draw out the culprit. An overwhelmed Young-Ja confessed that she was the spy to stop them from killing anyone else and Tic and his brigade dragged her away to torture, question and kill her.

Ji-Ah needed to kill one more man and when she saw that a bandaged and battered Tic had landed in the very medical ward where she worked in the Fall of 1950, she decided to make him her next and final victim out of revenge. And then a strange thing happened. Tic flashed that magical Chicago smile at her and they debated The Count of Monte Cristo and slowly but surely, Ji-Ah started to develop real feelings for Tic. He even created a makeshift movie theater for her on the military base, where they watched another Garland classic, Summer Stock. There was also a fascinating interaction between Tic, Ji-Ah and Sung (Daniel Chung). The latter was a Korean soldier from America who told Ji-Ah he was an outsider in the United States because of racism and an outsider in Korea because he’s American.

It’s a duality that popped up in various places throughout this fascinating episode. Tic is a romantic and a nerd but he’s also a killer, the very man who killed Ji-Ah’s bestie. Ji-Ah is also a killer and a revenge monster and a woman looking for love. As Ji-Ah points out, just because a person does monstrous things, that doesn’t make them a monster.

Sadly, it’s a message that got lost on Tic when Ji-Ah’s crazy foxtails nearly took his life in a moment of passion after she lost control. It’s a moment that allowed Ji-Ah to see into Tic’s future and even witness what seemed to be his death once he returns home. Ji-Ah and her Umma go to the sorcerer (Alexis Rhee, Black Panther) to find out if Tic is going to die, but she tells them very little and she wants that 100th kill. Was Ji-Ah’s vision true? Is Tic gonna die like that or will he die only for his cousin Christina (Abbey Lee) to bring him back from the dead? So many questions, so little time.