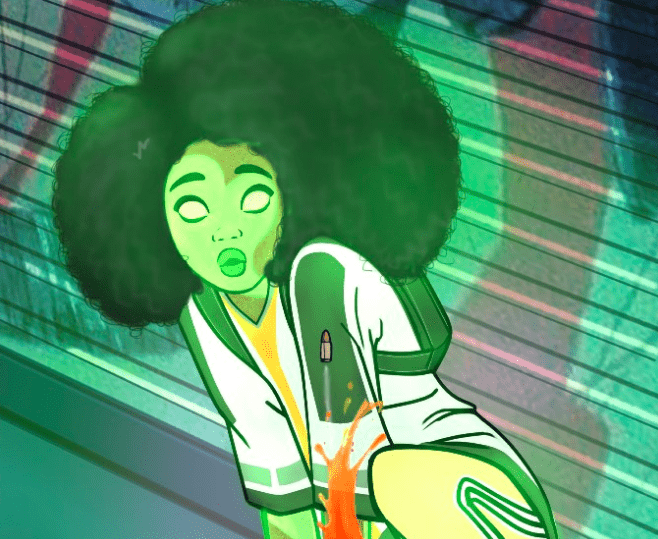 Sometimes one single event in our lives can change everything. The way we think, how we live, how we see ourselves, and how we see the people around us. In the webtoon comic Legend of Althea, we meet a young teenage girl by the name of Althea whose world is flipped on its head after a medical emergency. The comic, written by Royce Adkins with beautiful and stylish art done by Aleksandra TotBulajic, is one of both tragedy and overcoming it through strength and the hope of better times ahead. The story mixes elements of superhero fantasy with social commentary to an impressive effect.

As stated before, the comic stars Althea, a teenage girl who lives with her father and has lost her mother. One day, while Althea and her father are people watching in the park, she feels an intense throb in her chest. After passing out, her father takes her to the hospital where she’s rushed into surgery and undergoes a heart transplant. This is where the odd occurrences begin, something that’s par for the course in a superhero origin story. After returning home from her stay in the hospital, Althea notices this strange green glow coming from her chest when she’s standing in front of the bathroom mirror. It’s this heart transplant and its strange glow that kicks off the rest of the comic. With the three parts available currently, we see Althea’s relationship with her father and a budding new friendship with a boy named Clay that pushes her towards her duties as a superhero.

One of the most satisfying things about the comic, aside from the amazing story of a teenage girl thrust into the role of a superhero, is that the representation is outstanding, from a present and involved Black father to an intelligent teenage girl with ambition and drive. Not to mention our main hero is a young girl with vitiligo, which is something that we don’t see much of in fiction. Her vitiligo isn’t a plot point, and there’s no attention drawn to it. Althea is allowed to exist as she is without it being seen as an anomaly or something to be drawn attention to and that’s so refreshing.

Speaking of refreshing, the art style of the comic is something to behold. The soft edges give each panel an almost dreamlike essence to them, making the read a calming experience. The colors are vibrant without assaulting the eyes, and the character expressions are bold yet understated. Everything feels natural and honest. Something else that deserves recognition is the way the characters are dressed. Something that’s not often stated enough is how futuristic settings are staged when it comes to clothing. The characters in Legend of Althea are dressed in clothing that appears futuristic without coming off like costumes. They look like garments people would wear while out and about.

In terms of writing and dialogue, everything flows nicely and there’s never a dull moment or throwaway lines. If there’s something written out on a panel, it’s there for a reason to move the story along. You can tell that great care was taken to make every word in the comic count. It’s easy to get bogged down in the details of a story, but Legend of Althea knows the value of saying what you mean and meaning what you say. It’s easy to lose yourself in the comic and quickly find yourself wanting more. You have room to breathe and take in the narrative without feeling as if things are dragging along. That’s a talent in itself when it comes to writing.

Another thing to applaud about the writing of Legend of Althea is the historical easter eggs and callbacks to important figures in Black history. Like the hospital Althea undergoes her heart transplant at being named for physician and author Rebecca Lee Crumpler, who’s known for challenging the prejudice against Black people in the medical field. She also went on to become the first Black woman to be a doctor of medicine. Althea goes to Ruby Bridges High School, which is a reference to civil rights icon and activist Ruby Bridges, the first Black student to attend William Frantz elementary school during the New Orleans desegregation crisis in November 1960.

Give Legend of Althea a read through and marvel at the talent and obvious care that went into creating what’s shaping up to be an important comic. If things continue as they are, we may see Legend of Althea move to a larger scale, and that would be an amazing thing to witness.

You can follow the release of the comic on Webtoon here and support the ongoing creator Royce Adkins by becoming a patron here.