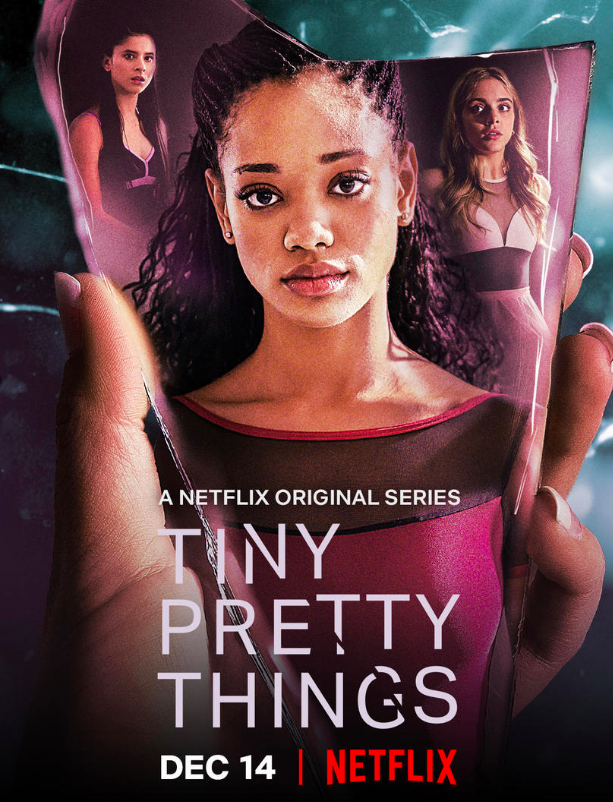 If you haven’t heard of actor and contemporary ballet dancer Kylie Jefferson, you don’t have to dig too far to find out about her work or see what she’s all about. Just fire up your Netflix app and tune into Dance Dreams: Hot Chocolate Nutcracker currently streaming. And if that’s not enough for you, then simply wait until December 14th to see her take the lead in the series Tiny Pretty Things.

Based on the book by Sona Charaipotra and Dhonielle Clayton, Tiny Pretty Things is set in the world of a ballet academy and charts the rise and fall of young adults who live far from their homes, each standing on the verge of greatness or ruin. However, the overarching story of Tiny Pretty Things is grounded in a gruesome accident that led to a classmate being pushed off the building of the Archer School of Ballet. Kylie Jefferson plays Neveah, a young woman recently accepted to the school to replace the student who suffered the tragic accident. Neveah finds herself attending a school filled with pretentious elitist dancers, and she’s forced to prove herself to the domineering and dismissive Monique Dubois (Lauren Holly) who runs the school.

In a phone interview, BGN spoke with Kyle Jefferson to discuss her breakout role in the upcoming series.

You play Neveah in Tiny Pretty Things. Tell us a little bit about who she is and what we can expect to see from her character in this series.

She definitely holds everyone around her down, whether it works in her favor or it doesn’t. She has her own sense of justice and does not stop at any cost. I love that confidence about her. It’s a fight that is so necessary. You often see that in other characters as well, but I really love the way that she does it because she’s never just advocating for herself. She’s the type of person who stands up for everyone. There’s no one who can be bullied or disrespected in front of Neveah. But she’s also still very soft. She has so much to learn, especially as she proceeds forward. I think she learned how to be soft in her approach to dance.

There is this dichotomy that we see with Neveah, because there’s a moment where she’s rejected and she’s ready to give up, but on the other hand she’s someone who tries to exude strength and confidence. How did you tap into both sides of her character?

That’s the part of me with myself, even before I knew that this character was being thought of. That was something I was coming into with myself. I called it “confidently being myself.” I’m many things; I’m not just one way ever. It’s always been very interesting to hear, maybe the way that I’ve been perceived, or how my intention could be one thing but someone experienced it a totally different way. Especially when it comes to people that I care about. They helped form and shape who we become in the world. I definitely think it was my upbringing and the people around me, all of the things that I wanted for myself. There came a point in life where I had to realize that this is going to hurt sometimes. You just have to keep bouncing back for a sense of stability. I guess doing the work on myself really helped me show up for that part of my character.

One thing that stands out is the rooftop, which is the centerpiece location for this story. Without giving too much away, what’s the significance of having the characters meetup at that location throughout each of the episodes?

I think it’s a sense of freedom, the sense of ownership for them. When you’re in the building, you have to abide by all these rules and you’re bound to all these dynamics with the people in your class and stuff like that. But when you get to take a moment on the roof, it seems like, listening to characters on the show, they are experiencing very freeing moments. Sometimes there are hard moments. It’s definitely a place where everyone can decompress and face whatever is burdening them at the time, so that when they leave that rooftop and go back downstairs, they can at least present themselves as though they have it all together.

Neveah has a complicated relationship with her mom. In fact, many of the ballet dancers have issues with their moms in this series. What is it about Neveah’s that stands out the most and how has it shaped her character?

Because ballet is the only structure in her life, we see that she navigates in every other part of her world with the rules of ballet. Especially because of her mother. She never really had that closeness with her mom that most children get to experience, and that’s her experience in life. In that regard, that is why she clings so much to dance and the rules of it. It gives her safety. I think it also helps give the audience compassion. Because, you see, it really reiterates that everyone acts, either in or out of love. Basically you’re trying to give love or you’re asking for it. You see that in so many different ways from all the characters.

When choreographing the scenes as someone with ballet experience, did you provide any feedback for your character’s choreography?

I felt more comfortable with a certain part of the choreography, stamina-wise and things like that. We had such amazing choreographers come in that it was really just about getting to experience the differences between all the voices that were being brought with the work. It was a collaborative effort, top to bottom, but, for me, being the dancer, or the vessel in this dynamic, I felt that I could just communicate like where my body was.

This is your first series ever. What has this experience taught you as an actor and what do you have planned next down the pipeline?

As an actor, it’s taught me that there’s so much to learn in every single environment that you go into. For me, my process, knowing that I was the one person in the room with the least amount of acting experience, I had to continue to learn from people. I was always watching my housemates, how they use different ways to color their acting or even how they get ready for characters on certain days. I really like to have people around me and to be a lot more observant. It also taught me a different level of opening up.

What’s next for me? December 14th is next for me. My little Christmas. I’m just at home with a bottle of wine and chocolate chip cookie. It just keeps getting better by the day, and I mean by the day ever since I found that I was even getting the part for Neveah. Every step of this journey has definitely gotten better. Whatever welcomes me is what’s next for me, and I just hope that I’m doing my part of my own time to be ready to show up for whatever that next blessing is.