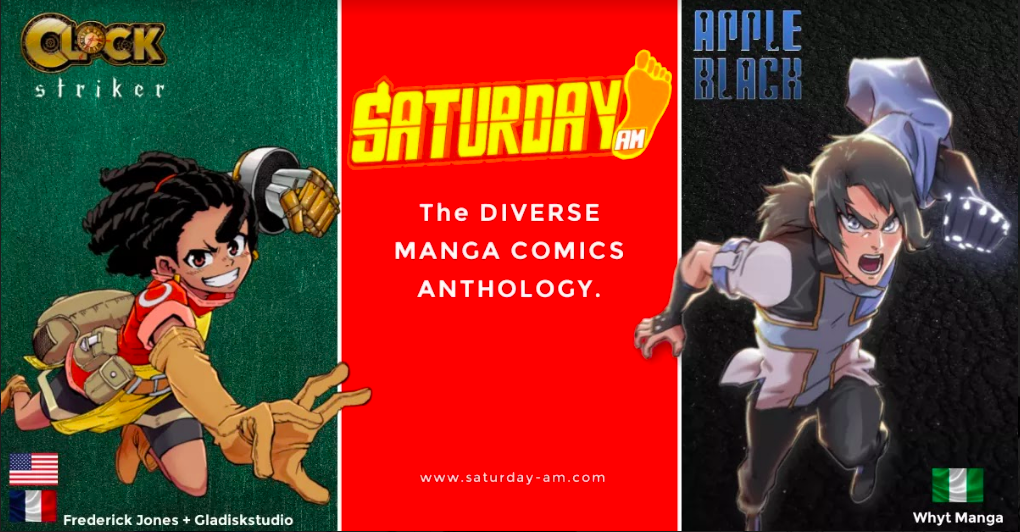 If you have never heard of Saturday AM, they are a global manga comics publisher who focus on promoting diversity wherever they can. The brand consists of over a dozen cool creator-owned titles made by people from all over the world. Their recent rise in popularity can be attributed to their hardworking staff members – who are also diverse and their engaging shonen style comics. Two of their biggest hit series are Apple Black by Nigerian artist Odunze Oguguo (aka Whyt Manga) and Clock Striker by African American writer Frederick Jones and French artist Issaka Galadima.

BGN is proud to feature the creators of Clock Striker and Apple Black and ask more about their series.

If you can summarize your respective stories into a paragraph what would it say?

Whyt Manga: Blessed with the ‘arm of God’ called Arodihs, the young sorcerer, Sano, attempts to fulfill his prophesied destiny as savior of the world called the Trinity. Despite ominous visions trying to steer him down a darker path, Sano is determined to protect the world while trying to uncover the source of power that is Apple Black. The story runs within Saturday AM exclusively and has two graphic novel collections available with a third scheduled for 2021.

Frederick Jones: Clock Striker follows Cast, a young apprentice or “striker” on her journey to become a full-fledged SMITH. They are a legendary fraternal order of Warrior Engineers who seemingly disappeared years ago. While few members were women or people of color, Cast is determined to break that mold thanks to her mentor – the only female Smith, Ms. Philomena Clock. The story runs within Saturday AM exclusively and the graphic novel collections will be revealed in 2021.

If you could compare your series to other manga/shows out there, what would they be?

Whyt Manga: Apple Black is influenced by a lot of my favorite series growing up. If I were to think of other series I feel Apple Black is a little like then it would be if Tite Kubo’s Bleach and J.K. Rowling’s Harry Potter had a baby.

Frederick Jones: Clock Striker is inspired by any adventure series with a young protagonist so to that end — I would compare it quite a bit to Naruto and the recent Netflix film, Enola Holmes.

What inspired you to create Apple Black / Clock Striker?

Whyt Manga: I had the idea to create this manga during my teenage years as I got more serious about art. So many things inspire my love of creativity from art, mythology, history, cinema, music, and even politics. Once I knew I could create something decent with Saturday AM, I began to look at bringing more of my own cultural African roots to the series. Now I’m interested to see just how far I can go with Apple Black.

Frederick Jones: I started Saturday AM to bring more diversity to manga. While we instantly had support amongst many creators of color (many of whom have been inspired to go on to build names for themselves in this space), we did NOT see a lot of characters of color. I never want to mandate creators do something but I also understand that the reason so many creators of color wouldn’t make diverse characters is because they hadn’t seen it done before. So, I created Clock Striker to really show how awesome diversity can be. That Clock Striker is one of our most popular series despite a lack of content demonstrates that the market is there and continues to inspire us to take it further.

Neither you nor your characters are Japanese so what cultural themes are you bringing to your manga-inspired series?

Whyt Manga: Apple Black takes place in a different world than ours which allows me to add my own twist on a variety of cultural and philosophical ideas.  An example of this would be Obinna, a character in the series whose name and background is heavily influenced by my Nigerian roots and experiences. Another instance would be SANO. Apple Black’s protagonist is a little ambiguous ethnically but still has Middle Eastern influences amongst others mixed in there.

Frederick Jones: I think the struggle of achieving things when the odds are against you is captured in Clock Striker. While “the underdog” is a message that everyone can understand, I wanted to shine a light on a perspective that, until recently, rarely was shown: the Black woman. As a Black man, I wanted to see a strong Black female protagonist who was presented as heroic, smart, and capable but is often being told she can’t do something. Women behind groups like Black Girls Code and movements like Black Lives Matter really inspired me to create this world.

How did you get into creating manga-inspired comics?

Whyt Manga: I am a Nigerian-born artist with a Bachelor of Fine art, a computer science minor, and a Master of Fine arts in visual communication design from the University of Texas at Arlington, where I now also teach one of its first-ever Manga classes as an adjunct professor. I’ve been fortunate to create a decent following online and truly enjoy spreading the joy of creativity to new artists.

As for drawing, in general, it was a great way to pass the time and entertain my friends and I, especially whenever Nigeria’s power outages occured. At an early age, I got exposed to Japanese manga and really fell in love with the storytelling. As the internet became more accessible in Nigeria, so did manga and anime, and my interest grew in attempting to make my own work in this style. It was pretty eye-opening to see how seriously people took it. I saw grown men hilariously argue about their favorite series (including Western content like the heroes of Marvel and DC Comics) at internet cafes. This really inspired my push to enter the entertainment industry and to begin that pursuit with an art degree in America. The rest is history although I still have a long way to go!

Frederick Jones: I’m a former Videogame executive in his mid-40’s who has worked as an Executive with Blockbuster Inc., Gathering of Developers, and Rapp Collins Worldwide. I’ve seen the Gaming sector and Consumer Products/ Brands from all angles. After a failed start-up, I decided to return to my 1st love: Japanese comics aka Manga. As a kid, I discovered Weekly Shonen Jump from a Japanese-American family friend and that led me to traveling to Japan as an Exchange student when I was High School. Growing up in the 80’s was a magical experience as pop culture was ascendant and things like Manga / Anime were not defined but if you knew what it was then looking for it became a special hobby. Capturing that nostalgia and feeling of discovery is what informs so much of what I’m doing with Saturday AM.

If you are interested in checking out these two diverse manga series, you can read them for free through the Saturday AM App today!