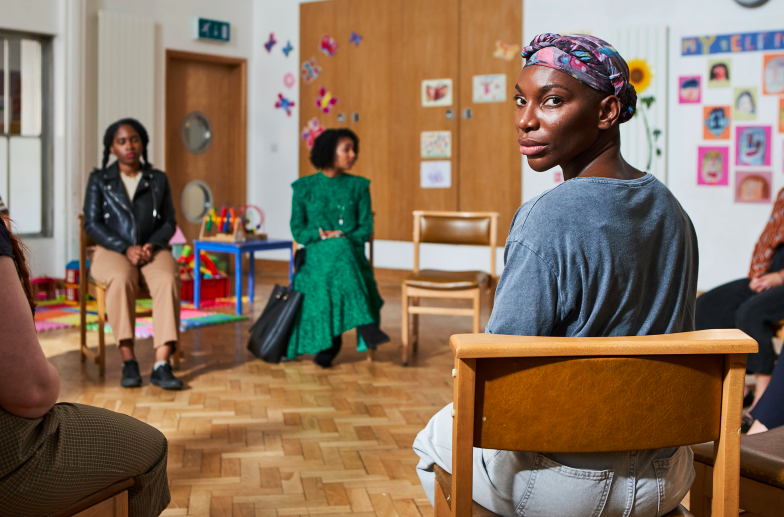 As Michaela Coel developed her quasi-autobiographical I May Destroy You she wrote 191 drafts before she got to the painfully sublime perfection that is the final product, which aired over 12 episodes on HBO. I keep trying to write this essay and I feel 198 drafts wouldn’t even be nearly enough for me to as eloquently articulate the incredible array of intersecting perspectives that come to light in I May Destroy You, aside from its foundational message of consent culture as it calls out every facet of rape culture itself.

Arabella Essiedu, played by Coel, is a Twitter celebrity whose first ebook was published to a huge public reception. On the eve of her deadline for her second, more challenging book, Bella goes out partying with her friends and ends up with her drink spiked, a head injury, and foggy memory the next day, coupled with the ultimate realization that she had been raped. As Bella begins processing the event and resulting horrors with the help of her friends Kwame (Paapa Essiedu) and Terry (Weruche Opia), I May Destroy You quickly becomes about far more than just sexual assault.

In 20-minute chunks, Coel’s opus also manages to compassionately explore class, immigration, labor exploitation and toxic capitalism, privilege, colonization and decolonization, medical racism, infidelity, sexuality, as well as the intricacies of friendship and other relationships as a group of three-dimensionally messy humans bumble their way through life, trauma, and ultimately healing — all of that, while also finding room for some serious belly laughs thanks to Coel’s perfect comedic timing, which goes along with her astounding dramatic skills and incredibly expressive face. I mean, if there is one face in the world that is an open book it is Michaela Coel’s in I May Destroy You. Stunning on all the levels.

As I tried to collect my many thoughts about I May Destroy You, I rewatched it from the beginning. With all the many moving pieces in mind and seeing it all come together again was almost like watching an entirely new show from scratch. The first time around, Arabella is undoubtedly the hero of the show even as Terry and Kwame play huge parts in her life. But the second time? Arabella is firmly in rare anti-hero territory for a Black woman, while we watch her self-involvement and narcissism only increase until she finally starts looking under her (metaphorical and actual) bed to examine all the uncomfortable things she’s pretended to forget that shaped the problematic behavior. Arabella’s messiness is so real, following exactly what happens in real life after a recent trauma: The incident can often bring up past unresolved traumas in order to force us to confront them. Watching these dynamics play out over I May Destroy You is difficult, but also incredibly life affirming for anyone who has been on a similar journey.

With its core of radical empathy — a feature that makes the story often hard to look at while also impossible to avert your gaze — I May Destroy You demonstrates how every person (yes, every single grown adult) is implicated in boundary and consent violations, from political borders to daily interpersonal interactions. Breaches happen all the time from the micro to the macro, and like we see again and again in this show, sometimes we don’t even realize that we’ve badly hurt someone until the damage is already done. Coel’s radical empathy interrogates both the freedom and limitations of forgiveness in a way I’ve never seen before — one that shifts these concepts into entirely novel territory that becomes a form of self-therapy, not just for Coel herself, but for all viewers pulled into her world.

But all that said about I May Destroy You’s power and humanity, this is not an easy show to watch. The rape scenes (sadly, there are more than one) are brutal, but not exploitative in their necessity on screen. And sometimes more painfully, the friction as Bella, Terry, and Kwame’s friendship approaches going off the rails after Bella and Kwame’s assaults is incredibly true to life. Some friendships cannot survive post-traumatic stress and the variety of nightmares that come with it. I’m a good decade older than Coel and her cohort, so I’ve had extra time for the various scenarios in I May Destroy You to play out in my real life, too. There were episodes of the show where I went through almost an entire box of tissues because of how hard the truths hit, there was so much sorrow leaking out of my eyeballs.

By the extraordinary choose-your-own-adventure-esque finale, I’ve only experienced the kind of full spectrum catharsis I went through with I May Destroy You once before, after seeing Pascal Laugier’s transcendental horror Martyrs for the first time. Coel not only puts you through her experiences wrapped inside Arabella’s, but she also holds up a sometimes terrible mirror with lots of room to see our own faces and lives reflected in the mistakes made on screen and the horrible things the protagonists have survived. At the end I felt overwhelmed with the weight of what I had seen in the show and relived from my own memories, but simultaneously unburdened and lighter with a new framework of how to approach my own significant lingering traumas. I highly recommend this experience for others who are also sifting or even swimming through the detritus of bad things past.

When Coel appeared on the Daily Show, Trevor Noah likened I May Destroy You to the opposite of Seinfeld. Where Seinfeld was pointedly a show about nothing, Noah noted that I May Destroy You is truly about everything, woven together beautifully through Coel’s nuanced writing and some of the most remarkable performances on screen in recent years. I May Destroy You is as much made up of the silences as it is the powerful words spoken, and, judging by the viewer responses, everyone who has seen this show has been changed by it, often profoundly.

“Your birth is my birth, your death is my death,” Arabella and Terry riff on and off for the entirety of I May Destroy You. And like an avenging goddess KaliMa or Medusa, Coel has absolutely destroyed me with her empathy, realism, and righteous rage channeled through the show. Also like with Kali, in Coel’s rampage and sociocultural dismantling there is potential for rising from the ashes, healing, and strength. Coel’s emergence as one of the greatest talents of her generation through I May Destroy You is indeed a rebirth for all survivors, and an entirely new paradigm for social justice television going forward.

Symbolism, Motifs, and the Significance of Alienation: A Review of Michaela Coel’s ‘Misfits’