Black Panther introduced audiences to a world filled with images of Black technology created by some of the best Black designers and makers in the business. For Netia McCray, Founder and Executive Director of Massachusetts-based Mbadika, it was an opportunity to team up with Erica Nwankwo, a Youth Engagement Manager at AutoDesk to produce a technology-focused mini-YouTube series called MLab.

S.D. Chrismon: Can you briefly talk about your journey’s to your particular interest in STEM and technology?

Netia McCray: I would say, my parents. Any time something went wrong or something broke they were like, “Here’s a book, figure out how to fix it.” I loved the Artemis Gordon character in Wild Wild West cause he’s like, “Ok Will Smith, I’ll let you have your moment but you know what? I’m gonna fix this behind the scenes.” Even Q from James Bond. And I’m able to go, “Ok this is why I was perceived as weird” and now [I’m] cool all of the sudden.

Erica Nwankwo: I’ve always been interested in tinkering. I was the child my parents would be afraid to leave in the house alone because when they come back I would have taken apart the microwave or I’d take apart an electronic device and I would not put it back the same way that I found it. I was really interested in sketching and drawing so I’d sketch all over the walls and all these things were just my way of expressing my ideas out into the universe and just trying to understand how things work. Now at AutoDesk as a youth engagement manager, [I work to] instill that sense of interest and urgency to take charge of your learning journey and to take on technology that might seem really big and scary and make it something practical and can be used every day.

SDC: How do you make 3D technology accessible to the folks who aren’t versed in this type of technology and what kind of uses do you see for 3D printing in the future?

Netia: I would say, making it more accessible and removing that barrier to entry is what me and Erica have been working on together. In collaboration, we also created a step-by-step guide, in which we hold your hand using the Instructable platform from AutoDesk. We’re naturally visual people, I can tell you about my underwater breathing device that I developed in case I become hired by the Ministry of Supplies to work for a secret undercover James Bond. But if I present you a 3D printed model and climbing carabiner, you can see if you feel comfortable attempting to swim underwater with this device. If you’re able to play candy crush, you can use AutoDesk Tinkercad software. Yes, it’s drag and drop.

SDC: How important do you think Black Panther will be to attracting Black youth, particularly Black girls, to take an interest in technology and become makers?

Netia: So for me, I had a very difficult time trying to figure out how I can be a Black girl at the same time being Netia the maker, engineer, [and] instructor. One of the nice things about Black Panther is it provided a language for me to communicate with girls of color about what I do and where my skills and knowledge could take them if they were able to gain them. And with the series and the step-by-step guide we’ve noticed that especially girls are coming out and saying, “Oh I can make that? I can do that or better yet, I can do it better than you.” Which is fine, because if you can make it better then prove it to me. That has been beautiful over the past couple of weeks.

Erica: I think the film really did a good job of portraying women in these different environments. That’s one of the passions behind the YouTube series is to show people of color using 3D printing with Tinkercad, laser cutting, and all these tools [which seem] inaccessible but are accessible. We really made an effort to reach out to the community, creating content that resonates with girls and anyone that had a passion for the Black Panther film and the comic books. 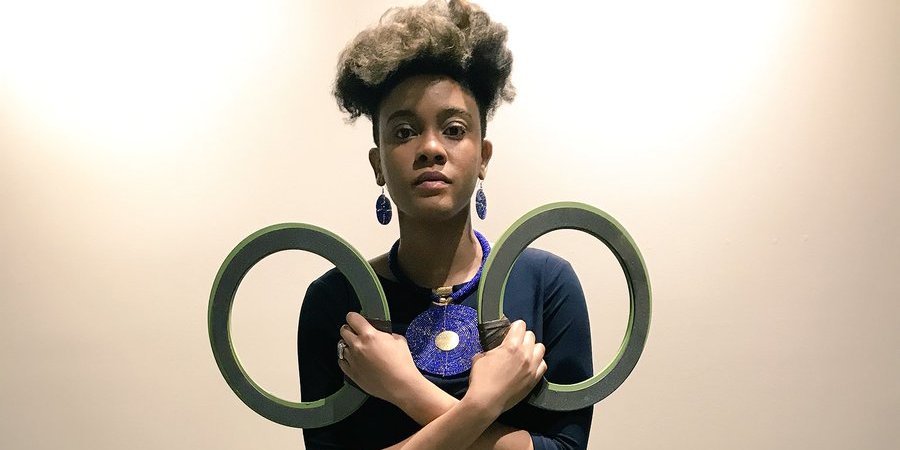 SDC: How do you think being a maker and using the technology you’ve shown in your videos will support social justice efforts and help to envision an Afrofuturist future?

Netia: One of the things about the film that was beautiful is that it showed a population of people who were untouched by colonialism and it showed what people of color who have the capability and knowledge and skills could obtain. It’s not just that Wakanda is an Afrofuturistic haven, it’s the fact that it’s more advanced than any [place] in the Marvel Cinematic Universe (MCU). So it’s not, ‘we can do as well as other people,’ it’s we can do better. It means that people of color have agency to improve their quality of life for themselves or their community. And that ties into the social justice piece, for example, Erica’s work at AutoDesk has been involved with e-Nable which creates prosthetic devices for people. On the other hand, you can have something more small-scale, [at Mbadika] we collaborated with Erica and the Center for Elder Services in Boston. Students designed a wearable device to help senior citizens be able to monitor their health and get assistance as needed, but also not look like the obvious “Life Alert” patient.

So there’s different ways of harvesting these digital fabrication tools in order to A) make Afrofuturism, “Afro Present” and B) to make sure that people can leverage technology and tackle some of the social justice issues we are dealing with right now.

SDC: Who are the black women makers out there that you admire?

Erica: A woman that I admire in my personal life was my grandmother. I think she’s the first maker that I knew. Rest her soul. The women in my family have been very strong and have been entrepreneurs for a really long time. And also through this work, we really got to connect with the designer Douriean Fletcher, who designed the jewelry pieces on the Black Panther film set.

Netia: The first makers I knew would have to be the female members of my family also. Nettrice Gaskins who works for the Fab Foundation is one of the makers that I look up to. She actually puts the “A” in STEAM (Science, Technology, Engineering, Art & Design, Mathematics). Jessica O. Matthews of Uncharted Power, she’s doing fantastic things with generating energy out of everyday toy products. And we were able to sit down with Douriean (Fletcher) because of the video series and the more I’m talking to her the more I’m like, “Why am I just now finding out about you?”

Erica: I would echo Netia. Working on this project has really allowed me to discover the makers behind the film. Like I learned about Hannah Beachler and Ruth E. Carter. I think that’s what I really enjoyed about this project was discovering people like myself that are out there doing amazing things and constructing universes. I think everyone’s imagination was just blown away by how visually appealing and accurate the movie portrayed Blackness, and Black culture, and technology. I thought it was amazing. 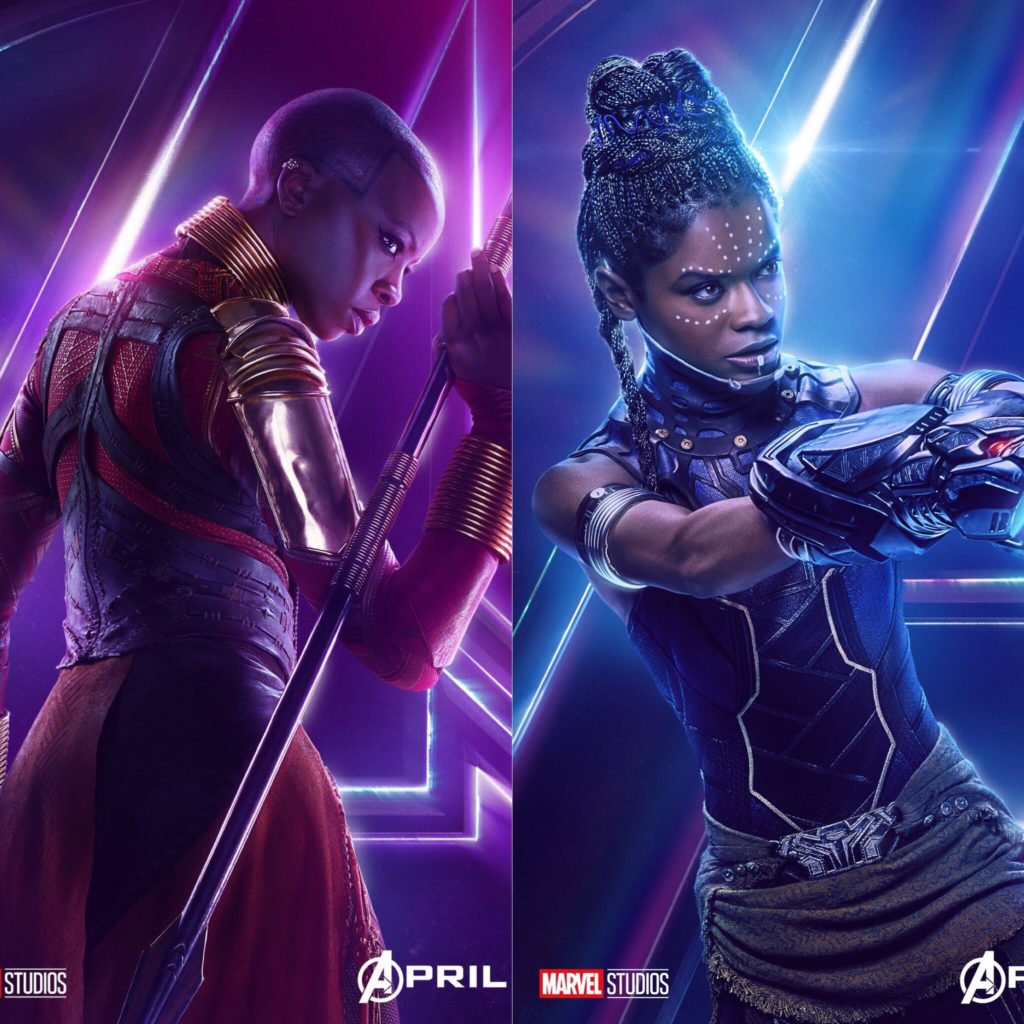 SDC: And of course, since we’re Black Girl Nerds we want to know some wonderfully nerdy things about you, rapid-fire style:

Netia: Ok I’ll let you have Shuri if Gamora from Guardians of the Galaxy technically qualifies as an Avenger since she’s in Infinity War.

Erica: Okoye was my girl from the Black Panther film but I don’t know if she’s one of the Avengers.

Netia: She is. So you can pick Okoye

Netia: Oh ok so I got Shuri ok cool!

Netia: Dirty Money the Netflix show or American Greed on CNBC but I feel like everyone is gonna be like, “What?”

SDC: Which Octavia Butler novel would you like to see turned into a movie

Erica: I don’t have a preference. I think any of her novels would make a great film.

Netia: Bloodchild? I think that would be a good like Black Mirror type [anthology] movie.

Netia: The writer of Children of Blood and Bone, Tomi Adeyemi.

Erica: I have a list of authors I don’t think they would be considered up and coming, of course, Chimamanda Adichie, I love her books. Homegoing by Yaa Gyasi. And Fresh Water by Akwaeke Emezi, which I have yet to read but I think it’s going to be very very tantalizing.

SDC: Finally, to take a cue from your videos in old-school Twitter 140 character style tell us your hope for Black girls and the future of making?

Netia: That Black girls, if they look at anything that captures their imagination, can look at it and feel confident that they’re smart enough and capable enough [to] not only make it but make it better.

Written by SdChrismon S.D. Chrismon is an Afrofuturist, pop culture junkie who lives with her partner and two weird cats in Minnesota. She published her first book, Bright City, under the pseudonym dc edwards in 2017. You can follow