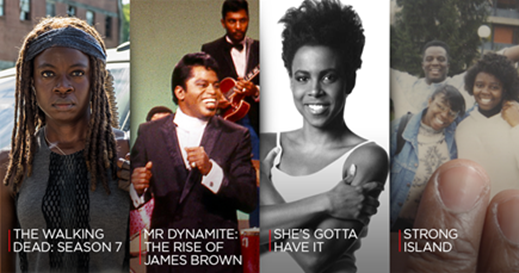 September So Lit On Netflix

Fall is nearby and guess what’s coming to Netflix? We’re here to tell you exactly what you can check out next month and September is about to be LIT on Netflix!  In September, the streaming service is gearing up with new films, documentaries, and series featuring entertaining, comedic and thought-provoking stories that will leave a lasting impression as summer ends.

In a true testament to #BlackExcellence, Mr. Dynamite: The Rise of James Brown chronicles the journey from rhythm and blues to funk and how James Brown left an indelible mark on American music. This Mick Jagger co-produced documentary features never-before seen concert footage, photographs, and interviews with those who were not only close to him but influenced by his genius, including Questlove, Bootsy Collins, Chuck D, Reverend Al Sharpton, and more.

Feeling nostalgic? Let the legendary director Spike Lee take you back to the original, iconic She’s Gotta Have It. Spend your last days of summer with Nola Darling and her three loves Greer Childs, Jamie Overstreet and Mars Blackmon. Don’t forget the series, She’s Gotta Have It debuts on Thanksgiving exclusively on Netflix.

Are you missing The Walking Dead? Never fear – unless it’s a zombie apocalypse. The Walking Dead: Season 7 is coming to Netflix for all your walker needs. Want to spend your last days of summer searching for the Easter eggs and debating theories on the meaning of Daryl’s jumpsuit. Catch up on Netflix before Season 8 begins!

Strong Island is Yance Ford’s emotional documentary on the life, death, and quest for justice for his brother, William’s 1992 murder in Long Island. A black 24-year-old teacher, William Ford was killed by Mark Reilly, a white 19-year-old mechanic. A deeply intimate and meditative film, Strong Island asks what one can do when the grief of loss is entwined with historical injustice, and how one grapples with the complicity of silence, which can bind a family in an imitation of life, and a nation with a false sense of justice.

As it gets a little colder it’s time to Netflix and CHILL.