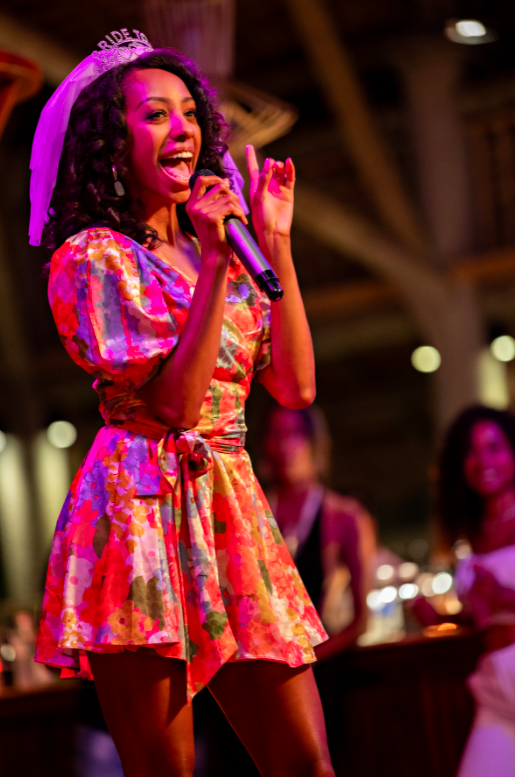 The old saying is that talent will out, and actor Christiani Pitts is finding herself in that fortunate position as she stars with Christina Milian, Sinqua Walls, and former SNL’er Jay Pharoah in the tropical beach-rific rom-com, Resort to Love.

For Pitts it was a sweet opportunity after a period of adjustment to what the pandemic took away. She had been the first African-American lead in King Kong on Broadway in 2018–2019 and was following that up with a revival of Aida when things came to a standstill.

She found herself with time on her hands until she got the call to go spend a couple of months in Mauritius for Resort, produced by Alicia Keys, no less.

Your character is doing a tropical destination wedding. Would you want to do that?

I love the movie so much. I’ve only seen it once because I don’t want to spoil it for myself. I would have watched this like, 30 times, I admit. But I loved it. I never thought I was going to be a tropical weather girl, but that inspired me to fall in love and go get married in the tropics. You know I gotta find the groom first, but when I do it’s straight to Mauritius.

That small detail, the groom. When you looked at the script, what were your first thoughts about this character?

First, I thought that she was very different from myself. The way she responded to everything that went down was very different to how I would have responded. And so I laughed because I said, “I think I’m going to probably go in for the Erica [played by Milian] part because I feel more like her,” talking some sense, you know. So I was gung-ho about not reading for Beverly. But then they were adamant about me reading for Beverly. Once I changed focus and explored how Beverly felt about things, I completely fell in love with her. She reminded me a lot of the women in my family who are just these incredible Southern belles with hearts of gold who lead with love.

So it’s not that she was naive, which was how I first interpreted it. It’s just that she led with love and she had a really, really big heart that focused on love and forgiveness and reconciliation. Once I looked at it that way and revisited it, I realized that I had to be Beverly. Beverly is just one hundred percent that girl, and I gotta do it. So when it all happened, it was such a blessing. I had so much fun.

How long was the shoot?

It was in Mauritius for maybe two and a half months. We had to quarantine on location for about two weeks, and then we started filming and it was like, go time. Our director got sick, and we had to stop production for a few days and then he was fine. He got well quickly, but everyone got to stay in paradise for like an extra two weeks. So we were not complaining.

What do you think is the best takeaway from this sort of pretty destination film?

I think following your heart. Don’t make quick decisions based on your emotions but really listening to your heart. It can take you all over the world. It can allow you to achieve your dreams, like as far as the Erica character is concerned. She follows her heart and her dreams. So I think the takeaway is about listening to your heart and doing what’s best for you and not allowing whatever is going on around you to distract you from living your dream.

People who were going to shows in 2018–2019 may remember you were in King Kong. What were some of the experiences for you and the problems Broadway actors faced as a result of the pandemic?

I was in the midst of my dream show. We were actually working on developing the show Aida, and playing Aida was a dream role of mine. We were three days into rehearsal, and we stopped. So it was really really sad to not know what was going on. As a theatre community, we all just tried to hold each other up and continue to speak light and love to each other and continue to claim that everything is going to be okay because it was a hard time.

The uncertainty was really hard. So when I got the call about this film, I was extremely emotional because I was just so thankful to get an opportunity to continue to do what I loved.

Aida was supposed to have been what I loved, and it was at the time, but then to work in this gorgeous location was extremely overwhelming. I cried pretty much the whole time. I have all these pictures of me in random locations on Mauritius with tears rolling down my cheeks because I was bawling. I was so grateful.

Hope this is not too sensitive. I think you knew Nick Cordero (Broadway actor and singer who died of COVID-19 related complications in 2020). Can you share a bit about what kind of person and actor he was?

Absolutely. He was a wonderful friend of mine. He was … it’s hard to find the words because he was such an incredible person and everyone who interacted with him was changed for the better. We were able to do A Bronx Tale together, which was my Broadway debut.

I understudied the lead of that show — and I was young and I didn’t really know much. I knew I wanted to be on Broadway my whole life but I had a lot of insecurities and uncertainty.

And I was the first person in that show to go on for a lead and I was terrified. And I’ll never forget Nick, after the show, pulling me aside and speaking so much life into me. He told me I was going to be a star and told me he had just never seen someone hit those nerves. He just spoke life into me, brought me to tears. And when I went on to do King Kong, his reaction was so funny because he said, “I told you. I told you this was going to happen.”

He was such a cool, cool guy. It was a tremendous loss to the world, to the theater community, to his family. It was incredibly difficult to try to understand how it all happened.

Everything that I do moving forward, I think is a reflection of the life that he spoke into me in 2016. Any sort of move I’ve made after that, I always remember that conversation.

Share a bit about what it’s like to be poised for some good stuff here in Hollywood. Have you seen any particular changes in your professional life?

That’s a beautiful question. I’m still learning every day and I’m trying to keep myself open to the changes.