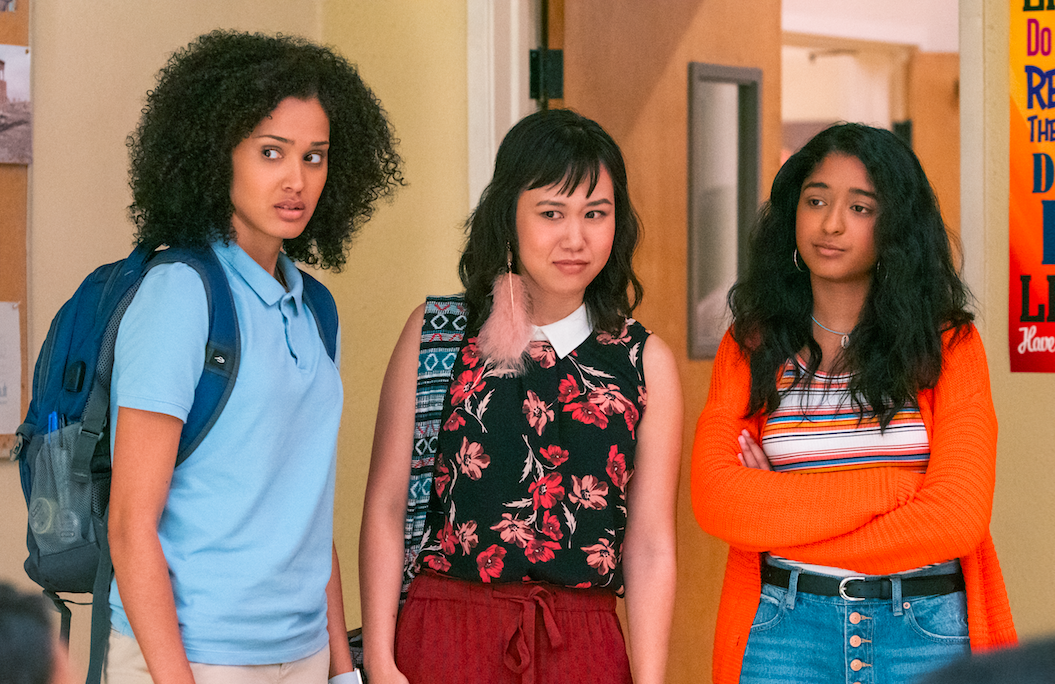 The Netflix original television show Never Have I Ever, created by Mindy Kaling and Lang Fisher, offers inspiration, representation, and fun with a diverse cast of women of color that stars Maitreyi Ramakrishnan as Devi.

This is one of the few shows that may offer us a glimpse into the narrative of a modern-day first-generation Indian American girl, and it’s pretty great.

Let’s start off by acknowledging the obvious: This show is recycling the same trope of the nerdy high school virgins trying to be cool and fit in with the popular kids. However, there are a few key components that enable Never Have I Ever to go against the grain of American television and achieve something magnificent.

If you can get over the recycled story trope, this show offers depth and complexity that your typical high school rom-com usually doesn’t. From nerdy bubbly idea unpacking to some deep geek analysis, I’ll be breaking down for you all the reasons that you should definitely give this show a watch. Without further delay, let’s get started, my nerds!

First (here comes a nerdy bubbly), it’s all about the gorgeous cast. When I heard Sendhil Ramamurthy was going to be in the show as Davi’s dad (Mohan Venkatesan), I couldn’t stop the flashbacks from seeing him in Heroes and falling instantly in love (Mohinder Suresh is back!). Even though we don’t get many scenes with him in this show, it’s extremely gratifying to have him. Speaking of gratifying scenes, Richa Moorjani is a total babe, so much so that the show is very careful to keep mentioning it. She plays Davi’s cousin (Kamala), who gracefully plays as both beautiful and intelligent.

Of course, we have to talk about Darren Barnet (Paxton Hall-Yoshida) and that epic scene where he takes of his shirt to throw down (I still don’t know how he got his shirt off so quickly, but am here for it). Yoshida is hot, he’s biracial, and he has a non-traditional family — hello attraction and complexity all in one package. I know Yoshida is the official hot guy of the series, but we have to talk about Ben Gross (Jaren Lewison). He’s the cute nerd that we all needed, the guy who reminds us all that, yes, hot nerds exists, and so do hot rich nerds — and he is both. However, what really gets our attention is his heart and family background.

Second (here comes a deep geek analysis), this is one of the first shows to give us teenage girls that don’t look like they’re 40, aren’t white, and do not have to be stereotypes of their racial groups. Maitreyi Ramakrishnan (Devi Vishwakumar), Ramona Young (Eleanor), and Lee Rodriguez (Fabiola) are unapologetically presented as intelligent, high achieving, and gloriously flawed human beings. Growing up, I loved high school dramedies, but could never see myself in the characters. Whether it was Lindsey Lohan, Hillary Duff, or Emma Stone, all the screens showed me and other audiences of color was white women with the same problems in every movie. It was always about some attractive white girl who wanted to fit in, get a guy, and have a better relationship with friends and family.

Which, of course, is similar to this show. Yet, Never Have I Ever adds some new flavors that you simply won’t get with those other movies: intersectionality. We aren’t just talking about teenage girls; we’re talking about girls who come from specific cultures with values that influence the way they experience and navigate through life. There is the pressure for Davi and her friends to both assimilate while simultaneously maintaining their family values. Davi must figure out how to be attractive in an American high school, while also worrying about dropping her textbook after it’s already been blessed. This show finally tackles the struggle that people of color in America experience while living dynamic lifestyles that extend beyond traditional American values.

We learn that Eleanor, one of Davi’s best friends, loves theatre and acting, which blows apart the idea that all Asian women are quiet, shy, and submissive. Eleanor is such a theater nerd. Fabiola, Davi’s other best friend, explores queerness, Blackness, and Latinx identity all at the same time, while also being a total tech nerd. Even if you think the multi-talents of these characters is a bit much, Kaling reminds viewers that people like these characters actually exist, and they deserve to be represented. If a white girl can be the star of a show or movie and be portrayed as smart, kind, attractive, and bold, so can a woman of color. It’s beautiful how this show changes the narrative while also keeping some of the quirks we love from these high school shows.

Third (this is a mix of nerdy bubbly and deep geek analysis) is the conversation the show presents on grief, mental health, and coping.

A sudden tragedy takes a very heavy toll on Davi, as some of her primary relationships falter and she struggles to healthily cope. The show takes on mourning, generational trauma, mental health, cultural tradition, and family values. We also see interesting parent-child dynamics with Eleanor, Fabiola, and Ben. At some point, one or several characters are resisting who they are and what they’re going though. They epitomize the human fear of rejection and hurt. Many of these high school shows don’t delve this far into mental health, as we see Davi’s angry outbursts and insecurities go far beyond not wanting to clean her room.

The first season of this show was fun and enjoyable. I wouldn’t say it’s groundbreaking, but they’re definitely onto something. We need more shows like this, and it’s about time that we’re finally getting one.

Never Have I Ever is currently streaming on Netflix.