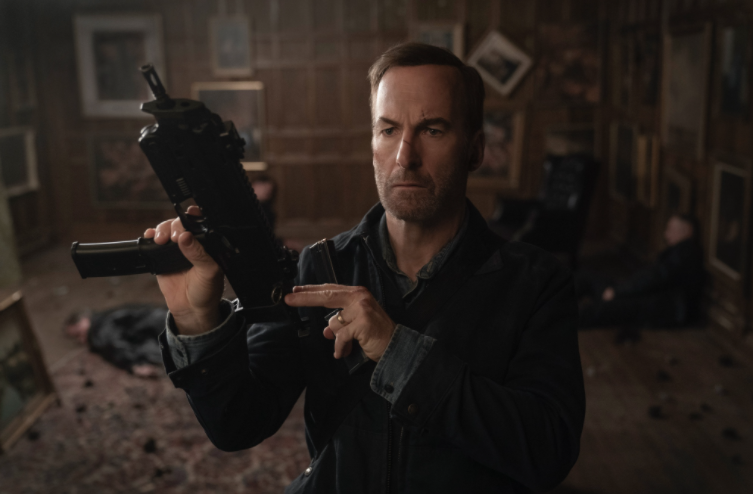 There are several middle-aged action stars that come to mind when I’m ready to veg out in front of my TV on a Friday night and fire up my favorite streaming service to look for an action flick — Bruce Willis, Jason Statham, and Liam Neeson for starters. If I decide I want to go old school with it, I’ll search for an occasional Steven Seagal or Jean-Claude Van Damme movie. However, never did I see actor Bob Odenkirk, best known for his role as criminal attorney Saul Goodman in Better Call Saul, as one of these options.

In that prequel to one of the best TV series of all time, Breaking Bad, Odenkirk is featured as a quick-witted fast-talking con-man turned lawyer. However, Odenkirk has found his creative edge and shines brightly in the dark comedy Nobody.

Hutch Mansell (Odenkirk) is an underestimated and overlooked dad and husband, taking life’s indignities on the chin and never pushing back. A nobody. He clocks in and out at his mundane job every day and has an incredibly predictable routine. Hutch blends in with the monotony of the world.

But then, two thieves break into his suburban home with his wife and two kids present, and he is forced to defend his family. At the start, Hutch appears to be a mild-mannered guy completely incapable of violence, and this situation could prove to be a serious threat to both him and his family.

When Hutch notices that he has a chance to defend his family, he decides to take the “high road” and keep the peace by leaving it up to the authorities instead. His teenage son Blake (Gage Munroe) is disappointed in him, and his wife Becca (Connie Nielsen) appears to feel the same way.

What we learn about Hutch, though, is that he’s not an ordinary nobody. He has secret lethal skills like a trained assassin. While swearing to live a life of normalcy, his doormat rage-simmering thoughts are triggered, and we, the audience, get a complete 180 as to who Hutch Mansell really is.

Directed by filmmaker Ilya Naishuller (Hardcore Henry), Nobody homes in on a man who is trying to live a mediocre life and appears to be content with such an existence. His former career of working as a consultant for a few three-letter agencies was not only unfulfilling but just didn’t have the edge he was quite looking for anymore.

The film takes on more humor when we learn Hutch’s dad (legendary Emmy winner Christopher Lloyd) is just as much of a lethal killer as his son. The fruit doesn’t fall far from the tree here. An appearance by RZA as Hutch’s brother, whose own hidden talents aid Hutch in his quest for vengeance, also adds some comedic flair to this story.

Derek Kolstad’s script delivers a substantive story about a man whoat his core is much softer than his sharp, rugged exterior portrays. This is, of course, same writer behind the John Wick franchise, so clearly he has a knack for writing characters who share this interesting dichotomy.

Tobey Maguire is a producer on this film; he has taken a seat behind the camera a great deal lately producing movies. Odenkirk also serves as producer.

There is something about an action film beyond its illustrious leading actor and crafty narrative, and that is the music score. Watching Nobody, fans will recognize some great hits from the past. The music used in the film syncs well with the action taking place from one scene to the next. For example, there is a climatic moment when Hutch exacts revenge on the main antagonist (Aleksey Serebryakov) to the sound of Louis Armstrong’s iconic “What A Wonderful World.” It just blends in perfectly with what is happening to both Hutch and his nemesis.  There’s also an intense car chase scene with Pat Benatar’s “Heartbreaker” playing in the background. Truth be told, that power ballad could work well in almost any scene of most movies.

Nobody doesn’t take itself seriously and just wants the viewer to have fun and have a moment to tune out from the real world for a couple of hours. And I believe “nobody” can say that Odenkirk doesn’t deserve to be on the middle-aged action stars list. Time to add Bob now.

Nobody arrives in theaters March 26th.