James has successfully cut feelings from his life. When he was still in grade school, he stuck his hand in a deep fryer just to feel something. He’s already an expert at killing animals. Each kill is remembered in detail; from a single butterfly to his neighbor’s cat. Disturbingly, he can’t remember the cat’s name. James is fully detached.

Alyssa is new to town, a sexual target struggling to keep out of her step-father’s reach, and trying desperately to get her mother to notice. Mostly, Alyssa misses her father. He has sent a birthday card every year since she was eight but hasn’t bothered call or visit. Alyssa is angry. She makes sure everyone she comes in contact with knows she’s willing to endure a verbal altercation.

End of the Fucking World weaves a Cohen Brothers-like situational comedy with grungy teen angst. This combination culminates to two people trying to connect who are unable to speak their truth out loud. Their adventure is told in voice-over, often saying the opposite of the actions they are actively taking.

Despite being a British TV series — it aired on Channel 4 in the U.K. in the fall — there is an Americana motif throughout the show. The kids visit an American style diner, they dance to country music, and they often lament that their lives would play better if they were in America. As an American, it’s hard to pinpoint why they feel this way.

Their happiest and most connected moments tend to happen around American images like: waving fields of wheat, a giant American flag, and the sweet twang of a banjo. Perhaps America is a symbol of the freedom the lack  Maybe, to them, America is a far-off place of dreaming. Their dreams are just as far away and just as unobtainable. For me, it was never clear. 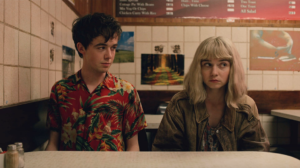 The music selections, on the other hand, was delightful. Shout out to Music Supervisor Grahm Coxon. He has put together the music for shows like My Mad Fat Diary, Southland Tales, and Daria. Every song feels alive with joyous, exuberant youth. Even the dark songs have a spark of life.

The cast holds this show together. Like with most Netflix television programs, the binge factor helps the viewer get through the show. If this were a weekly broadcast, the slow pacing would certainly turn many viewers off. Content-wise, this is a story that could fit in a two-hour film.

Luckily, Jessica Barden (Alyssa) and Alex Lawther (James) were cast to play the leads. For the last seven years, Barden has been crafting minor roles in major works. On Penny Dreadful she played the bloodthirsty Justine. As the girl with the constant nosebleeds, she brought a sense of dread and hope to an unraveling world in The Lobster. Finally, she played Sophie, the naive friend in Hannah. It’s good to see her where she belongs, in a leading role.

As Alyssa, she is a force with which to be reckoned. Every person the young couple comes in contact with is cursed out. Recently, Reese Witherspoon, in her Glamour Hollywood Heroes speech stated, “I dread reading scripts that have no women involved in their creation — because inevitably, the girl turns to the guy and says, ‘What do we do now?’ Do you know any woman in any crisis situation who has absolutely no idea what to do?” This is not a problem for The End of the Fucking World. It was directed in equal measure by Jonathan Entwistle and Lucy Tcherniak. 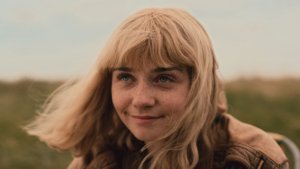 Alyssa is young and does not know what to do. But that never stops her from having an answer to the problem. It is almost never the right answer, but, she fully rules her decision making, her sexual urges, and her body. In the traditions of Daria and Juno, Alyssa is intelligent beyond her years. She also isolates herself from anyone that seems too normal. Trapped and desperate she makes wild decisions with wild consequences. It’s an honest portrayal of a woman stepping into herself.

Lawther is best known for playing young Alan Turing in Imitation Game. But his best role to date is as Kenny in the “Shut Up and Dance” episode of Netflix’s Black Mirror. Here, as James, he plays the role of the emotionally repressed youth. After witnessing a tragedy he turns off the part of him that feels. 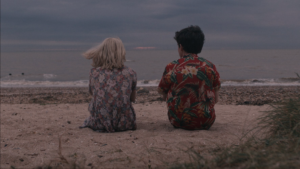 As spectacular as Lawther is in the role, it is unnerving to watch a young man, with a deep bloodlust, fall in love with his prey. In 2018, after the Hollywood purging of perverts and rapists, the first three episodes of The End of the Fucking World seem in poor taste. Harley Quinn/Joker shippers will be satisfied with the show’s opening. The show does make a turn for the better around episode four. Alyssa is not blindly in love. James is more complex than he thinks.

If you have four hours to spare, the show is worth watching. The parents are in so much pain you can’t help but sympathize with them. There’s a lesbian, detective office affair that should be the center of an hour-long drama. Plus, the music is phenomenal. 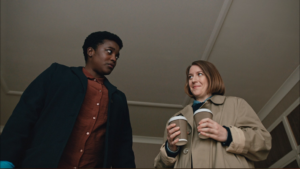 The End of the Fucking World premieres on Netflix Friday, January 5.