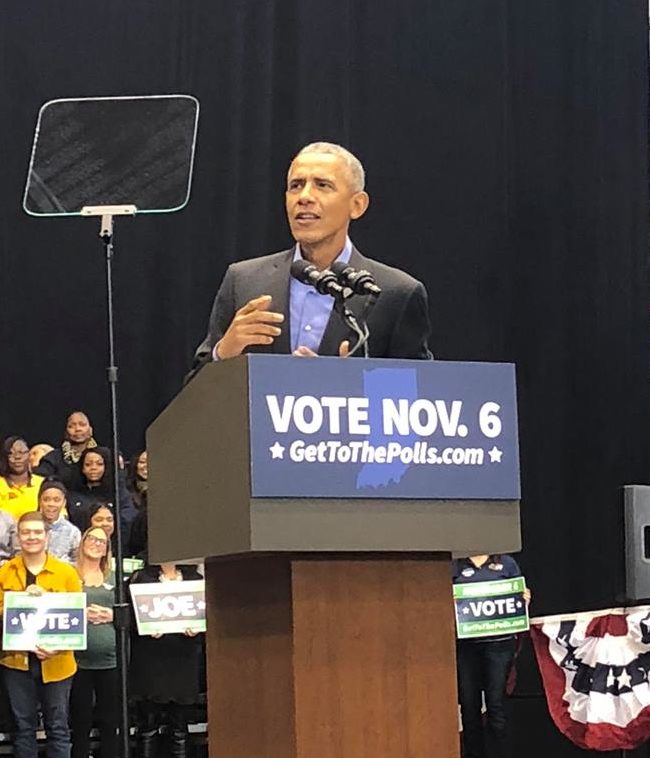 Word that the 44th President, Barack Obama was coming to Northwest Indiana hit my neck-of-the-woods just as the news of Trump’s plan to sow his hatred on the same grounds was announced. To many of us, Obama has been that refreshing salve on an excruciating abscessed tooth that is Trump and his base. And, they seem to be getting more infectious by the day. So, you can imagine just how energized The Region (as locals call Northwest Indiana) was Sunday when Obama and his team touched down at the Genesis Convention Center in Gary.

Gary is situated in Lake County, one of very few little blue specks in the red state of Indiana. However, the seat that is up for grabs in this area is a hot one — a US Senate seat currently occupied by Democrat Joe Donnelly. His opponent Mike Braun is a Trump Republican looking to flip the seat red like the rest of the state. In fact, Trump has visited the state twice earlier in the week (at Indianapolis and then at Southport) before he touched down in Fort Wayne Saturday night, a day ahead of Obama’s only visit to the state.

According to Indiana State Congressman Andre Carson, the multiple visits show that the GOP is running scared. “They’re so afraid of Joe Donnelly, they brought President Trump in three times this week.” Trump has not ventured into the blue northwest corner of Indiana, where the population is predominantly Black and Latinx.

In fact, Lake County has the largest population of Latinx people of all the Indiana counties and the second largest Black population. East Chicago and Gary respectively are where those populations are located. The concentration of people of color are not the only things keeping Trump away from the blue corner of Indiana, the area’s history of turning out for blue candidates also makes it a place where Trump’s rallies would fall flat — or become swallow in a wave of “booing” and heckling. In 2012, 66% of Lake County voted for Obama, despite the fact the Mitt Romney won the state. Additionally, Joe Donnelly won 65% of the vote and his Senate seat that same year. Mike Braun should worry about this area, which, like the rest of the country, is experiencing higher than normal voter turnout.

Gary and Lake County haven’t escaped the polling problems that have rocked the nation in anticipation of this election. Lake County lost 170 polling places in July, just months before the election. The cities of Gary and East Chicago lost half their number. The Secretary of State Connie Lawson claims that the closings are fair.

We all know better.

So, it’s no wonder that Obama came back to Gary to help in a key Indiana race. The city has always been a pitstop, in fact. In 2008, the Obamas campaigned in Gary. Barack went to Roosevelt High School in April 2008, and Michelle went to West Side High School on the eve of the May primary that year. And, Gary responded in kind.

So the Sunday rally was much more than an opportunity to give Donnelly one last push before election day. Obama gave the crowd several encouraging words to live by, including:

“The only antidote to the powerful few is that energized many.”

“Society doesn’t work unless words have meaning and consequences.”

The people of Gary and Northwest Indiana needed this refreshing pit stop to energize them after the polling problems and other barriers that the administration has thrown their way in anticipation of the election.

Click here to find more information about where to cast your ballot on Nov. 6, 2018.

5 Ways You Can Protect the Vote…from the Poll Line