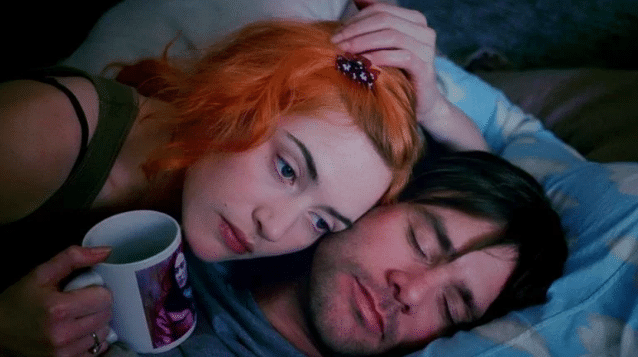 How happy is the blameless vestal’s lot
The world forgetting by the world forgot
The eternal sunshine of the spotless mind
Each prayer accepted, each wish resigned.
—Alexander Pope, “Eloisa to Abelard”

After a vicious fight and an increasingly toxic and stifling relationship, Clementine Cruczynski (Kate Winslet) elects a new medical procedure that allows her to erase all memories of her ex-boyfriend Joel Barish (Jim Carrey). When Joel finds out what Clementine has done, he decides to erase her in retaliation even though she no longer has any idea who he is and has already moved on to a new boyfriend Patrick (Elijah Wood). But as Joel gets deeper and deeper into his own brain and re-lives some of his and Clementine’s more meaningful moments of intimacy, he decides to call it off. But since he’s unconscious, this proves not just challenging, but a feat with tragic consequences for Joel. 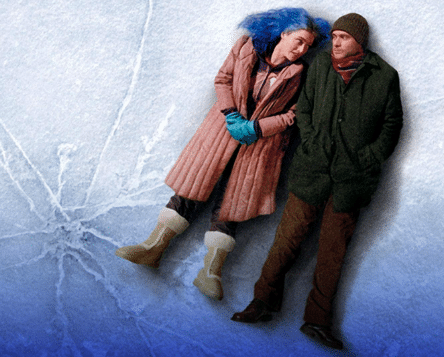 Written by the master of the non-linear story Charlie Kaufman (Adaptation, Being John Malkovich, Synecdoche, New York) and directed by surrealist auteur Michel Gondry, Eternal Sunshine of the Spotless Mind remains one of the most perfect love stories ever made even 15 years later.

“I apply my personality in a paste,” Clementine tells Joel in a rare moment of self-deprecation, referring to her ever-changing hair color. It is green when they first meet on the beach in Montauk, a sign of growth, freshness, and something new blossoming. The next time they meet at Barnes and Noble, her hair is bright red, signaling danger, but also love and passion. Next, it is orange, the twilight of Clementine and Joel’s disintegrating relationship. And when they meet anew in Montauk after both having their memories wiped, her hair is blue for sadness and a loss she cannot remember. Clementine might apply her personality in a paste, but her hair color is a clear map of their timeline, much like the annotated brain scans that Dr. Mierzwiak (Tom Wilkinson) uses to expedite erasing a brain.

While some have accused Clementine’s character of being the dreaded and sexist trope of the manic pixie dream girl, I disagree with this reading. Thanks to Kate Winslet’s nuanced and three-dimensional performance, Clementine is far more than this reductive analysis. Kaufman even calls out the trope in his intricate screenplay when Clementine says to Joel, “I’m not a concept. I’m just a fucked up girl looking for her own peace of mind. Don’t assign me yours.” To which Joel responds internally, “I still thought you were going to save my life, though,” situating the manic pixie dream babe firmly in his own head and not in the real world. This is one of my favorite movie moments of all time.

Jim Carrey’s performance matches Kate Winslet’s beat for beat, and their chemistry is remarkable. His vulnerability is stunning, and he has channeled his comedic physicality into a tightly controlled performance that makes the absurd completely believable.

Charlie Kaufman’s spiral narrative style is perfect for a story about loss and in particular — memory loss. The way Eternal Sunshine flips back and forth between the past and present, reality and Joel’s memories, and also Joel’s memories as they are warped by the procedure requires a verbal ability that very few screenwriters could pull off even after decades of practice. Kaufman does it effortlessly.

Michel Gondry draws out exceptional performances from every single cast member, including Mark Ruffalo as heartsick memory technician Stan, Elijah Wood as gaslighting pervert Patrick, Kirsten Dunst as unwitting receptionist Mary Svevo, and Tom Wilkinson’s not-so-benevolent Dr. Mierzwiak. Jane Adams and Mark Cross as Joel’s best friends Carrie and Rob are perfectly dysfunctional, and often steal the scenes they are in, which is quite an accomplishment when working against such a commanding and unusual performance from Jim Carrey. 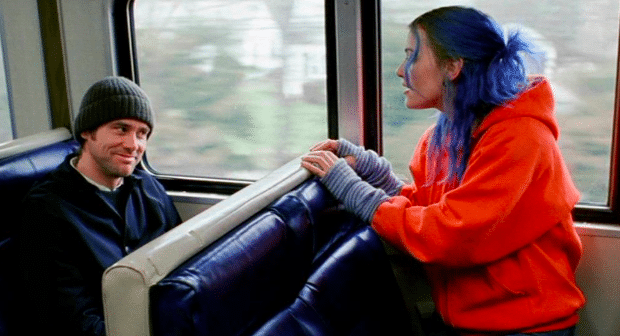 For a film as surreal and Daliesque as Eternal Sunshine of the Spotless Mind, it is ironic how realistic and three-dimensional is this story’s portrayal of the arc of a relationship. Neither Joel nor Clem are perfect. Their relationship is volatile, passionate, and often destructive. Their communication problems are severe. But their relationship is also filled with intimacy, openness, and often innocent and completely without guile. And even though they are inextricably bound to each other, it doesn’t mean that the things they once loved about the other eventually become the things that threaten to drive them apart. This is so true to life it hurts.

When they come back together, it is with open eyes and complete transparency. Something that had been missing in their previous go around. One of the only other films that tackle relationships with this profound level of realism is Derek Gianfrance’s Blue Valentine. And the fact that Eternal Sunshine manages this feat while simultaneously being a science fiction romance story makes it even more compelling.

Among its many philosophical questions, Eternal Sunshine of the Spotless Mind also brings up many ethical questions about the effective treatment of trauma through these kinds of non-regulated and not scientifically proven experimental procedures, like wiping memories. Patrick the Creep uses his professional access to Clementine and her home, while she was unconscious no less, to gather information so he could seduce her later with how well he “knows” her. Patrick goes even further to steal Joel’s Clementine memorabilia and use it to further manipulate a woman who just erased that very man. And hero figure Dr. Mierzwiak, who gives people the opportunity to begin again, not only erases his mistress Mary’s memories himself, but also ignores the fact that the procedure clearly does not work as advertised.

When Joel and Clementine meet again, Joel has effectively lost many of his core foundational memories due to the negligence of Dr. Mierzwiak and his associates. Lacuna Inc. took far more from him than just the thoughts of his ex-girlfriend. Maybe this happened to Clementine, too. That would explain why she is a very different person — manic and approaching a psychotic break — after the procedure than she was before, another testament to Kate Winslet’s multi-layered construction of Clementine’s arc through body language and her expressive eyes.

There are so many messages embedded in Eternal Sunshine of the Spotless Mind. Do not run from your pain; heal it. There are no quick fixes to grief after a relationship ends. If there are quick fixes to trauma, these become addictive and ineffective. When medical procedures are privatized it opens the door to dangerous, life-altering and unethical practices without any oversight.

But most importantly, Eternal Sunshine of the Spotless Mind is about accepting people for who they are, rather than trying to remake them into who we want them to be. If we can’t accept the good, bad, complicated, and everything else in between with our partners, it is time to move on in a healthy and life-affirming way. I’ve heard some people say that Clementine and Joel probably would have broken up again anyway. I disagree. But even if they did, the next time it would be with open eyes and the memory of so many lessons learned. Our memories make us who we are. And without memories, we would just make the same mistakes over and over again.

Fifteen years later and Eternal Sunshine of the Spotless Mind still teaches us in technicolor just how painful that kind of existence would be. It’s a message that has not grown stale yet, and I don’t expect it ever will.

‘Liar Liar’: Only Liars Will Say It’s Not Funny