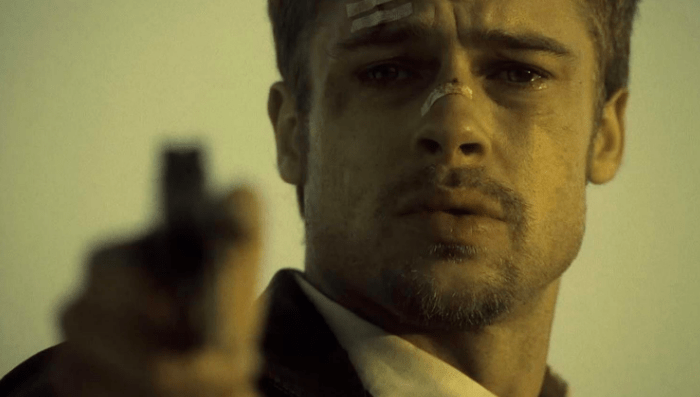 In David Fincher’s neo-noir horror Seven, William Somerset (Morgan Freeman) is a veteran detective in an unspecified urban police department who is just seven days away from retirement when a disturbing serial killing case falls in his lap. Detective David Mills (Brad Pitt) is a new transfer who gets assigned to be point on the case, even as Somerset and the rest of the supervisors can already see it’s way above his pay grade. As Mills’s brash and compulsive persona clashes with Somerset’s staid introspection and careful considerations, they discover their serial killer is murdering based off the seven deadly sins. The race to catch him before the seven days are up becomes a fight for the detectives’ survival and ultimate humanity.

When Seven first came out in 1995 the content was beyond shocking. The grisly murder tableaus were unlike anything we’d seen on screen at that point, and Fincher’s stylish filmmaking elevated each scene in such a way that the movie never felt exploitative in spite of the horrific plotlines. The bulk of the violence takes place off-screen, and we as the viewers are left to process the aftermath of each horrendously escalating crime scene along with the detectives who also were seeing this level of emotional and physical carnage for the first time. 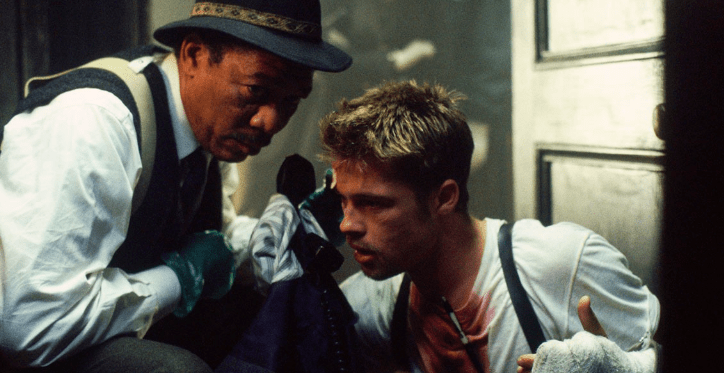 Watching Seven today is as stunning as it was back then, maybe even more so now that the gritty camera work has been remastered in high definition for new TVs. I normally leave the room during the Lust murder investigation — that sword dildo remains visually way too much for me to handle. But this time around the Sloth scene — the victim that John Doe (Kevin Spacey) had been torturing for a year in his own bed — also had me legitimately dry heaving as I fled to my home library safe space thanks to the crisp digitization of the original grainy film stock. The intricacy of Seven’s story and Fincher’s delicate touch with the subject matter remains a singular feat of filmmaking that I wish more directors, horror directors in particular, would return to more often.

What ended up surprising me the most in revisiting Seven after several years away is how the movie absolutely shatters white devilry tropes, in particular within law enforcement narratives. First, the serial killer John Doe reveals his belief that he is doing God’s work in torturing and murdering his chosen victims based on their violation of one of the seven deadly sins. White devils are often framed as anti-heroes, but in Seven he is only a hero in his own estimation, not in ours — a different kind of white devil entirely.

Second, John Doe’s victims are all white folks, which is a far cry from many other white devil narratives like Breaking Bad, The Sopranos, Death Wish, and others where the violence is predominantly acted out on Black and Brown bodies. In spite of the uber-urban setting that would stereotypically feature gang violence and the like, the only crime we see in Seven is by a white man against other white people. Going deeper, this violent criminal also happens to be independently wealthy and highly educated, contrasting other portrayals of white crime in cop movies that are blamed on drug addiction, poverty, or a lack of education. Somerset notes that John Doe has anonymized himself by choice, and whiteness is what gives him this privilege. 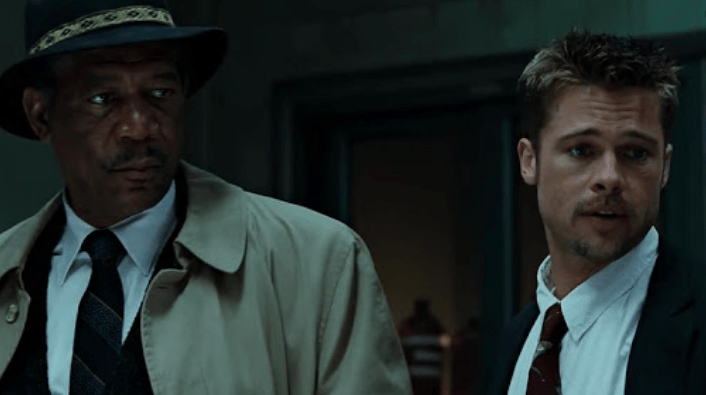 The third, and arguably the most forward-thinking aspect of the movie, is that virtually every single Black person in Seven is in protector roles. The only Black lawbreaker on screen was in fact paid to lie by Detective Mills himself in order to cover his mishandling of a crime scene. Unlike most cop movies that rely on racial stereotypes of criminality or presumed pathology in which a white anti-hero goes after minorities often with impunity, the white devilry inherent in Seven is enacted solely on other white people, and it is a Black narrator who witnesses and testifies to it.

At the end of Seven, bad cop Mills, who murdered a suspect in cold blood, is arrested immediately, unlike what tends to happen in real life. Could this be because Det. Mills’s victim, for once, is white? It’s possible. But given Fincher’s other choices in the movie, from casting to narrative arc, Mills’s arrest is yet another white devil trope deconstructed. After all, Mills himself was a more traditional white devil in Seven, an anti-hero cop who did what needed to be done to see his kind of justice served, even if he didn’t follow the rules he was supposed to.

Before the movie’s explosive ending that has become so iconic over the past two and half decades, many people continue to hear Brad Pitt’s voice screaming, “What’s in the box?!” Every time we see a sealed package, Somerset makes an observation about John Doe’s victims and “forced attrition.” He notes that John Doe has selected his victims for violating a deadly sin, but instead of giving them an opportunity to atone over the long term, he makes them choose right now. The Pride murder chose to overdose rather than call the police after John Doe mutilated her face; Greed was required to cut seven pounds of flesh for penance.

But forced attrition is nothing new to white devils, especially in today’s world of cell phone cameras and instant uploads to the cloud for mass consumption. How many stories have we heard recently about folks being openly racist, homophobic, xenophobic, transphobic, misogynistic, and all of the above — until they get caught, and all of a sudden they are crying and sorry. Were any of John Doe’s victims requiring penitence actually repenting, or did they just want to survive? Were any of these real-life folks caught out in the bigotry actually sorry, or just sorry they got caught?

What’s particularly wild about Seven is that back in the days before online booksellers, certain books used to be flagged by the FBI and CIA if they were checked out of a library. Books like Mein Kampf and other evil-disseminating texts were on the list because of limited copies. But now, anyone can buy these books from sellers who have no obligation of disclosure, and publishers can now discreetly continue to print and sell copies of Mein Kampf without oversight.

For the closing line of the film, Somerset says: “Ernest Hemingway once wrote, ‘The world is a fine place, and worth fighting for.’ I believe in the second part.” It’s the only brief moment of hope in Seven, one of the bleakest stories ever put to screen, and Somerset’s annotation has only grown more relevant to real-life as the years have gone by. That said, in the wake of George Floyd’s murder by police and the incredible outpouring of support for the Black Lives Matter movement that has begun inspiring structural changes to American law enforcement, I think Somerset might finally have been encouraged to concede — just a little bit — to the first part of Hemingway’s statement, too.